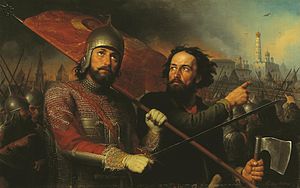 Dmitry Mikhaylovich Pozharsky (Russian: Дми́трий Миха́йлович Пожа́рский; IPA: [ˈdmʲitrʲɪj mʲɪˈxajləvʲɪtɕ pɐˈʐarskʲɪj]; October 17, 1577 - April 30, 1642), a Rurikid prince, led Russian forces against Polish invaders in 1611-1612 towards the end of the Time of Troubles.[1] He obtained from Mikhail I of Russia (reigned 1613-1645) the unprecedented title Saviour of the Motherland.[2]

Pozharsky was descended from a dynasty of sovereign princes which ruled the town of Starodub-on-the-Klyazma near Suzdal. At one point in the 15th century their family patrimony burned to the ground, in consequence of which event they assumed the name of Pozharsky (from pozhar, the Russian word for conflagration). It is interesting to note that Dmitry's mother came from the Beklemishev family, just like the mother of Mikhail Kutuzov, who would be credited with saving Russia precisely two centuries after him.

The family was never particularly prominent, and Pozharsky's early career was not documented until he took part in the Zemsky sobor which elected Boris Godunov to the throne in 1598. Four years later, he was attested as a stolnik. When the Time of Troubles broke out upon Godunov's death, he was present at the defense of Kolomna (1608) and helped Vasily IV during the Siege of Moscow in 1609. Later that year, he routed the Bolotnikov Cossacks at the Pekhorka River. In 1610, Pozharsky was in command at the defense of Zaraysk against the forces of False Dmitry II, Pozharsky was close to the throne during the rule of Tsar Boris Godunov, which made him quite an influential figure among Russia’s elite.[3] 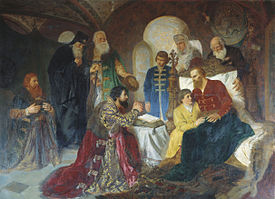 Pozharsky and the delegation from Moscow.
Painting by Wilhelm Kotarbiński (1882).

By that time, the popular indignation against abuses of the Polish aggressors had gained momentum. After Prokopy Lyapunov rallied the first Volunteer Army in Ryazan, Pozharsky promptly joined the cause of rebels. He took a prominent part in the first Moscow Uprising but was wounded on 19 March 1611 while defending his house at Lubyanka Square and was transported by his adherents to the Trinity for convalescence.

In autumn 1611, when Pozharsky was recuperating at his Puretsky patrimony near Suzdal, he was approached by a delegation of burghers who offered him command of the second Volunteer Army then gathered in Nizhny Novgorod. The prince agreed on condition that he would be assisted by Kuzma Minin, a representative of the Nizhegorod merchants.

Although the volunteer corps aimed at clearing the Polish invaders out of Moscow, Pozharsky and his contingent marched towards Yaroslavl first. There they resided for half a year, vacillating until the opportunity for rapid action was gone. A man of devout disposition, Pozharsky fervently prayed before Our Lady of Kazan, one of the holiest Russian icons, prior to advancing towards Moscow. Yet even then he proceeded so slowly and timorously, performing religious ceremonies in Rostov and paying homage to ancestral graves in Suzdal, that it took him several months to reach the Trinity, whose authorities ineffectually sought to accelerate the progress of his forces. 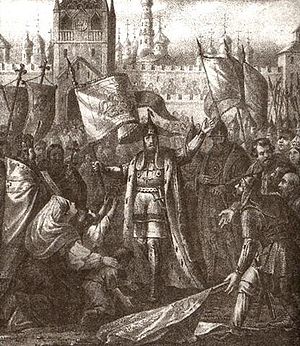 Finally, on 18 August 1612, the Volunteer Army encamped within five versts from Moscow, just in time when Hetman Chodkiewicz arrived with provisions to the relief of the Polish garrison barricaded within the Moscow Kremlin.[3] The very next day Pozharsky advanced to the Arbat Gate of the city and two days later he engaged with Chodkiewicz's contingent in a four-day battle. The outcome was in no small part due to decisive actions of Pozharsky's assistant, Prince Dmitry Trubetskoy, who captured the provisions intended for the Poles quartered in the Kremlin. As a result, a famine broke out among the Poles and they had to surrender to Pozharsky and Trubetskoy in October, after being guaranteed safe passage and humane treatment. Nonetheless, most of the Poles were slaughtered upon exiting the Kremlin and few survived captivity.

Pozharsky and Trubetskoy presided over the Muscovite government for half a year, until a new tsar was elected by the Zemsky Sobor, whereupon Pozharsky was made a boyar and Trubetskoy was honoured even more highly. The Time of Troubles was now over, but minor risings couldn't be subdued for an extended period of time. In 1615, Pozharsky operated against the Lisowczycy and three years later he fell upon the forces of Vladislaus IV, yet the conservative system of mestnichestvo precluded him from taking supreme command in any of these engagements. He governed Novgorod in 1628-30 and fortified Moscow against an expected attack of the Crimean Tatars in 1637. Pozharsky's last taste of battle came during the ill-fated Smolensk campaign, when he was relegated to secondary roles.

As soon as peace had been restored, Pozharsky was given some enviable posts in the Muscovite administration. Among other positions, he managed the Prikaz of Transport in 1619, the Prikaz of Police in 1621–28 and the Prikaz of Moscow Judges in 1637–37 and 1640–42. He was summoned by the tsar to confer with the English ambassadors in 1617 and with the Polish ones in 1635. In recognition of his services, he was granted extensive estates around Moscow, where he commissioned several churches, interpreted in retrospect as monuments to his own victory against the Lithuanians and Poles during a dire crisis in the history of Russian statehood. One such tent-like church survives in his suburban estate of Medvedkovo. Another was the Kazan Cathedral in Moscow, adjoining Red Square from north-east, a direction whence Pozharsky's army arrived to salvage the Muscovites in 1612.

Pozharsky's family went extinct in 1672, upon the death of his granddaughter, who was married to Prince Yury Dolgorukov, the most famous Russian commander of the time. Yet his memory would be cherished by the Romanov dynasty which to a great extent owned the crown due to his prowess and skill. When patriotic feelings were on the rise during the Napoleonic wars, a bronze Monument to Minin and Pozharsky was erected on Red Square. The day when Pozharsky and Minin entered the Moscow Kremlin as liberators was declared a national holiday in 2005. During Euro 2012 group game between Russia and Poland, Russian fans unfurled a huge banner that read 'This is Russia' with Pozharsky's image.[4]