In 1979–1980, Yazov was commander of the Central Group of Forces in Czechoslovakia. He was commanding the Far East Military District in the northern summer of 1986, when, according to Time magazine, he made a favourable impression on General Secretary Mikhail Gorbachev, which led to later promotions. He held the post of Soviet Defence Minister from May 1987. In 1987–1990, Yazov was a candidate for membership in Politburo. He was a key part of Black January. Yazov was responsible for deployment of Russian OMON commando units to Latvia and Lithuania in early 1991. During the August Coup of 1991, Yazov was a member of the State Emergency Committee, for which he was purged from his post by Gorbachev. During the Yeltsin period Yazov was prosecuted and acquitted in 1994.

Yazov spent 18 months in Matrosskaya Tishina. According to the magazine Vlast' No. 41(85) of 14 October 1991 "...from the prison contacted the President with a recorded video message, where repented and called himself "an old fool"". Yazov denies ever doing so. He did accept the amnesty offered by Yeltsin, stating that he was not guilty. He was dismissed from the military service by Presidential Order and awarded a ceremonial weapon. He was awarded an order of Honor by the President of Russian Federation. Yazov later worked as a military adviser at the General Staff Academy.

Despite his selection by Gorbachev for the Defence Minister's position, William Odom, in his book The Collapse of the Soviet Military, repeats Alexander Yakovlev's description of Yazov as a "mediocre officer", "fit to command a division but nothing higher".[1] Odom suggests Gorbachev was only looking for "careerists who would follow orders, any orders".

Yazov appears in Tom Clancy's Cold War espionage thriller The Cardinal of the Kremlin in his capacity as Defence Minister and the superior of the titular spy Colonel Filitov. 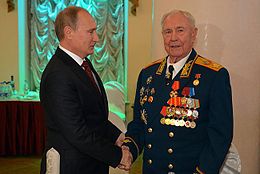