From Infogalactic: the planetary knowledge core
(Redirected from Dnieper River)
Jump to: navigation, search
This article is about the river. For other uses, see Dnieper (disambiguation) and Dnipro (disambiguation).
"Dnepr" redirects here. For the missile, see SS-18 Satan and Dnepr (rocket).

The Dnieper River /ˈniːpər/ or /dəˈnjɛpər/ (also known as: Dnepr, Dnyapro or Dnipro) is one of the major rivers of Europe (fourth by length), rising near Smolensk, Russia and flowing through Russia, Belarus and Ukraine to the Black Sea. It is the longest river of Ukraine and Belarus and the fourth longest river in Europe. The total length ranges between 2,145 km (1,333 mi)[1] and 2,201 km (1,368 mi)[2][3][4][5] with a drainage basin of 504,000 square kilometres (195,000 sq mi). The river is noted for its dams and hydroelectric stations. The Dnieper is an important navigable waterway for the economy of Ukraine and is connected via the Dnieper–Bug Canal to other waterways in Europe.

In antiquity, the river was known to the Greeks as the Borysthenes and was part of the Amber Road. Arheimar, a capital of the Goths, was located on the Dnieper, according to the Hervarar saga.

Human representation of the Dnepr river (known as Borysthenes) on an Ancient Greek coin of Pontic Olbia, 4th–3rd century BC

In the three countries through which it flows it has essentially the same name, albeit pronounced differently:

The river is mentioned by the Ancient Greek historian Herodotus in the 5th century BC as Borysthenes (Βορυσθένης), as well as by Strabo; this name is Scythian (cf. Iranian *varu-stāna) and translates as "wide land", referring most likely to the Ukrainian steppe.[citation needed] The late Greek and Roman authors called it Δάναπρις - Danapris and Danaper respectively - (dana in Old Persian meant "river"); this form is derived from Sarmatian Dānu apara "the river on the far side".[6][citation needed] Its Old East Slavic name used at the time of Kievan Rus' was Slavuta or Slavutych, the Huns called it Var,[10] and Bulgars - Buri-Chai.[citation needed] The name in Crimean Tatar: Özü.[11] 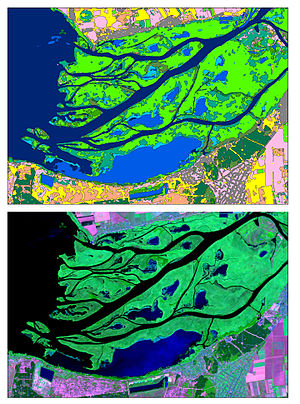 The source of the Dnieper is the turf swamps (Akseninsky Mokh) of the Valdai Hills in central Russia, at an elevation of 220 m (720 ft).[12] For 115 km (71 mi) of its length, it serves as the border between Belarus and Ukraine. Its estuary, or liman, used to be defended by the strong fortress of Ochakiv.[citation needed]

On the Dnepr River to the south of Komarin urban-type settlement, Braghin District, Gomel Region the southern extreme point of Belarus is situated.[13]

Tributaries of the Dnieper 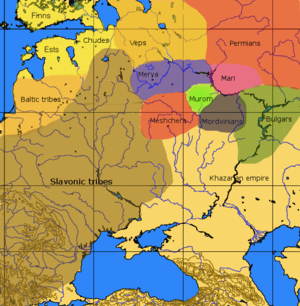 Many small direct tributaries also exist, such as, in the Kiev area, the Syrets (right bank) in the north of the city, the historically significant Lybid (right bank) passing west of the centre, and the Borshahivka (right bank) to the south.

The water resources of the Dnieper basin compose around 80% out of all Ukraine.[14]

Dnieper Rapids were part of trade route from the Varangians to the Greeks, first mentioned in the Primary Chronicle. The route was probably established in the late eighth and early ninth centuries and gained significant importance from the tenth until the first third of the eleventh century. On the Dnieper the Varangians had to portage their ships round seven rapids, where they had to be on guard for Pecheneg nomads.

Along this middle flow of the Dnieper, there were nine major rapids (although some sources cite a fewer number of them), obstructing almost the whole width of the river, about 30-40 smaller rapids, obstructing only part of the river, and about 60 islands and islets.

After Dnieper Hydroelectric Station was built in 1932, they were inundated by Dnieper Reservoir.

There are a number of channels:

- Krasnoznamenskaya irrigation system in the south-west of the Kherson region;

- North Crimean Canal - will largely solve the water problem of the peninsula, especially in the arid northern and eastern Crimea;

The river is part of the Quagga mussel's native range.[15] The mussel has been accidentally introduced around the world where it has become an invasive species.[15]

From the mouth of Prypiat River to Kakhovka Hydroelectric Station is a cascade of dams and hydroelectric stations.[14] 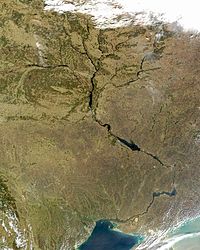 Satellite image of the Dnieper and its tributaries

Major cities, over 100,000 in population, are in bold script. Cities and towns located on the Dnieper are listed in order from the river's source (in Russia) to its mouth (in Ukraine):

Arheimar, a capital of the Goths, was located on the Dnieper, according to the Hervarar saga.[16]

Almost 2,000 km (1,200 mi) of the river is navigational (to the city of Dorogobuzh).[14] The Dnieper is important for the transport and economy of Ukraine[citation needed]: its reservoirs have large ship locks, allowing vessels of up to 270 by 18 metres (886 ft × 59 ft) to access as far as the port of Kiev and thus create an important transport corridor.[citation needed] The river is used by passenger vessels as well. Inland cruises on the rivers Danube and Dnieper have been a growing market in recent decades.

Upstream from Kiev, the Dnieper receives the water of the Pripyat River. This navigable river connects to the Dnieper-Bug canal, the link with the Bug River. Historically, a connection with the Western European waterways was possible, but a weir without a ship lock near the town of Brest has interrupted this international waterway. Poor political relations between Western Europe and Belarus mean there is little likelihood of re-opening this waterway in the near future.[17]

Navigation is interrupted each year by freezing in winter, and severe winter storms.

The Dnieper in the arts

The River Dnieper has been a subject for artists, great and minor, over the centuries. Major artists with works based on the Dnieper are Arkhip Kuindzhi and Ivan Aivazovsky.

The Dnieper River is close to the Prydniprovsky Chemical Plant radioactive dumps (near Dniprodzerzhynsk), and susceptible to leakages of radioactive waste. The river is also close to the Chernobyl Nuclear Power Station (Chernobyl Exclusion Zone) that is located next to the mouth of the Prypiat River.