From Infogalactic: the planetary knowledge core
Jump to: navigation, search
Not to be confused with Domain Object Model. 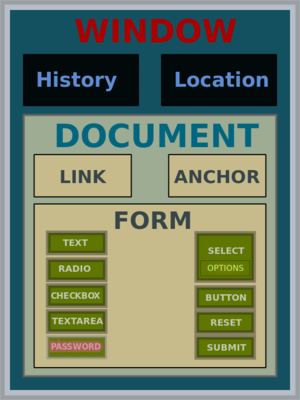 Hierarchy of objects in an example HTML DOM—Document Object Model

The Document Object Model (DOM) is a cross-platform and language-independent convention for representing and interacting with objects in HTML, XHTML, and XML documents.[1] The nodes of every document are organized in a tree structure, called the DOM tree. Objects in the DOM tree may be addressed and manipulated by using methods on the objects. The public interface of a DOM is specified in its application programming interface (API).

The history of the Document Object Model is intertwined with the history of the "browser wars" of the late 1990s between Netscape Navigator and Microsoft Internet Explorer, as well as with that of JavaScript and JScript, the first scripting languages to be widely implemented in the layout engines of web browsers.

JavaScript was released by Netscape Communications in 1995 within Netscape Navigator 2.0. Netscape's competitor, Microsoft, released Internet Explorer 3.0 the following year with a port of JavaScript called JScript. JavaScript and JScript let web developers create web pages with client-side interactivity. The limited facilities for detecting user-generated events and modifying the HTML document in the first generation of these languages eventually became known as "DOM Level 0" or "Legacy DOM." No independent standard was developed for DOM Level 0, but it was partly described in the specification of HTML 4.

Legacy DOM was limited in the kinds of elements that could be accessed. Form, link and image elements could be referenced with a hierarchical name that began with the root document object. A hierarchical name could make use of either the names or the sequential index of the traversed elements. For example, a form input element could be accessed as either document.formName.inputName or document.forms[0].elements[0].

In 1997, Netscape and Microsoft released version 4.0 of Netscape Navigator and Internet Explorer respectively, adding support for Dynamic HTML (DHTML), functionality enabling changes to a loaded HTML document. DHTML required extensions to the rudimentary document object that was available in the Legacy DOM implementations. Although the Legacy DOM implementations were largely compatible since JScript was based on JavaScript, the DHTML DOM extensions were developed in parallel by each browser maker and remained incompatible. These versions of the DOM became known as the "Intermediate DOM."

The World Wide Web Consortium (W3C), founded in 1994 to promote open standards for the World Wide Web, brought Netscape Communications and Microsoft together with other companies to develop a standard for browser scripting languages, called "ECMAScript." The first version of the standard was published in 1997. Subsequent releases of JavaScript and JScript would implement the ECMAScript standard for greater cross-browser compatibility.

After the release of ECMAScript, W3C began working on a standardized DOM. The initial DOM standard, known as "DOM Level 1", was recommended by W3C in late 1998. About the same time, Internet Explorer 5.0 shipped with limited support for DOM Level 1. DOM Level 1 provided a complete model for an entire HTML or XML document, including means to change any portion of the document. Non-conformant browsers such as Internet Explorer 4.x and Netscape 4.x were still widely used as late as 2000.

DOM Level 2 was published in late 2000. It introduced the getElementById function as well as an event model and support for XML namespaces and CSS.

DOM Level 3, the current release of the DOM specification, published in April 2004, added support for XPath and keyboard event handling, as well as an interface for serializing documents as XML.

By 2005, large parts of W3C DOM were well-supported by common ECMAScript-enabled browsers, including Microsoft Internet Explorer version 6 (from 2001), Opera, Safari and Gecko-based browsers (like Mozilla, Firefox, SeaMonkey and Camino).

To render a document such as an HTML page, most web browsers use an internal model similar to the DOM. The nodes of every document are organized in a tree structure, called the DOM tree, with topmost node named "Document object". When an HTML page is rendered in browsers, the browser downloads the HTML into local memory and automatically parses it to display the page on screen. The DOM is also the way JavaScript transmits the state of the browser in HTML pages.

When a web page is loaded, the browser creates a Document Object Model of the page.

With the object model, JavaScript gets all the power it needs to create dynamic HTML:

Because DOM supports navigation in any direction (e.g., parent and previous sibling) and allows for arbitrary modifications, an implementation must at least buffer the document that has been read so far (or some parsed form of it).[citation needed]

Web browsers rely on layout engines to parse HTML into a DOM. Some layout engines, such as Trident/MSHTML, are associated primarily or exclusively with a particular browser, such as Internet Explorer. Others, such as Blink, WebKit, and Gecko, are shared by a number of browsers, such as Google Chrome, Opera, Safari, and Firefox. The different layout engines implement the DOM standards to varying degrees of compliance.