In geometry, a dodecahedron (Greek δωδεκάεδρον, from δώδεκα dōdeka "twelve" + ἕδρα hédra "base", "seat" or "face") is any polyhedron with twelve flat faces. The most familiar dodecahedron is the regular dodecahedron, which is a Platonic solid. There are also three regular star dodecahedra, which are constructed as stellations of the convex form. All of these have icosahedral symmetry, order 120.

The convex regular dodecahedron is one of the five regular Platonic solids and can be represented by its Schläfli symbol {5, 3}.

The dual polyhedron is the regular icosahedron {3, 5}, having five equilateral triangles around each vertex.

In crystallography, two important dodecahedra can occur as crystal forms in some symmetry classes of the cubic crystal system that are topologically equivalent to the regular dodecahedron but less symmetrical: the pyritohedron with pyritohedral symmetry, and the tetartoid with tetrahedral symmetry:

A pyritohedron is a dodecahedron with pyritohedral (Th) symmetry. Like the regular dodecahedron, it has twelve identical pentagonal faces, with three meeting in each of the 20 vertices. However, the pentagons are not constrained to be regular, and the underlying atomic arrangement has no true fivefold symmetry axes. Its 30 edges are divided into two sets – containing 24 and 6 edges of the same length. The only axes of rotational symmetry are three mutually perpendicular twofold axes and four threefold axes..

Although regular dodecahedra do not exist in crystals, the pyritohedron form occurs in the crystals of the mineral pyrite, and it may be an inspiration for the discovery of the regular Platonic solid form. Note that the true regular dodecahedron can occur as a shape for quasicrystals with icosahedral symmetry, which includes true fivefold rotation axes.

Its name comes from one of the two common crystal habits shown by pyrite, the other one being the cube.

The coordinates of the eight vertices of the original cube are:

The coordinates of the 12 vertices of the cross-edges are: 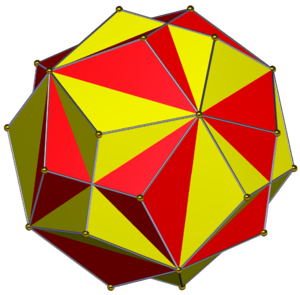 A reflected pyritohedron is made by swapping the nonzero coordinates above. The two pyritohedra can be superimposed to give the compound of two dodecahedra as seen in the image here.

The pyritohedron has a geometric degree of freedom with limiting cases of a cubic convex hull at one limit of colinear edges, and a rhombic dodecahedron as the other limit as 6 edges are degenerated to length zero. The regular dodecahedron represents a special intermediate case where all edges and angles are equal.

A tetartoid (also tetragonal pentagonal dodecahedron, pentagon-tritetrahedron, and tetrahedric pentagon dodecahedron) is a dodecahedron with chiral tetrahedral symmetry, (T). Like the regular dodecahedron, it has twelve identical pentagonal faces, with three meeting in each of the 20 vertices. However, the pentagons are not regular and the figure has no fivefold symmetry axes.

Although regular dodecahedra do not exist in crystals, the tetartoid form occurs in the crystals. The name tetartoid comes from the Greek root for one-fourth because it has one fourth of full octahedral symmetry, and half that of pyritohedral symmetry.[1] The mineral cobaltite can have this symmetry form.[2]

Its topology can be as a cube with square faces bisected into 2 rectangles like the pyritohedron, and then the bisection lines are slanted retaining 3-fold rotation at the 8 corners.

To generate a tetartoid pentagon under tetrahedral symmetry, choose numbers 0 ≤ a ≤ b ≤ c.[3] Calculate:

If nd1d2 ≠ 0, then the following are vertices of a tetartoid pentagon: 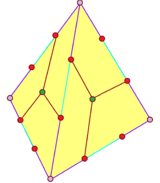 The rhombic dodecahedron can be seen as a degenerate pyritohedron where the 6 special edges have been reduced to zero length, reducing the pentagons into rhombic faces.

The rhombic dodecahedron has several stellations, the first of which is also a parallelohedral spacefiller.

There are 6,384,634 topologically distinct convex dodecahedra, excluding mirror images, having at least 8 vertices.[7] (Two polyhedra are "topologically distinct" if they have intrinsically different arrangements of faces and vertices, such that it is impossible to distort one into the other simply by changing the lengths of edges or the angles between edges or faces.)