Dodoma (literally "It has sunk" in Gogo), officially Dodoma Urban District, is the national capital of Tanzania[2] and the capital of Dodoma Region, with a population of 410,956.[1]

Located at Lua error in Module:Coordinates at line 668: callParserFunction: function "#coordinates" was not found., in the center of the country, the town is 486 kilometres (302 mi) west of the former capital at Dar es Salaam and 441 kilometres (274 mi) south of Arusha, the headquarters of the East African Community. It is also 259 km north of Iringa through Mtera. It covers an area of 2,669 square kilometres (1,031 sq mi) of which 625 square kilometres (241 sq mi) is urbanized. 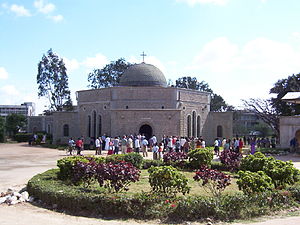 Out of the total population, 199,487 people (48.5 percent) are male while 211,469 people (51.5 percent) are female. The average household size is 4.4 people.[1] The Roman Catholic Church reports that 19.2% of the population are Roman Catholics.[3] Dodoma is populated by different ethnic groups because it is a government administrative centre, although the indigenous ethnic groups are the Gogo, Rangi, and Sandawe. There are also small Indian minorities.[citation needed]

Dodoma was founded in 1907 by German colonists during construction of the Tanzanian central railway. In 1973, the Tanzanian government announced that the capital would be moved from Dar es Salaam to a more central location to better serve the needs of the people. Dodoma was selected for this purpose, as it was an already established town at a major crossroads with an agreeable climate, impressive landscape, and room for development.[4] American architect James Rossant developed a master plan for the new capital in 1986, sponsored by the United Nations.[5] Tanzania's National Assembly moved there in February 1996, but many government offices remain in Dar es Salaam, which remains the commercial capital.

A major highway connects Dodoma with Dar es Salaam via the Morogoro region in the east. To the west, there are roads to Mwanza and Kigoma going through Tabora. The Great North Road links the city with Arusha to the north, via Kondoa. The city is also served by the Central railway line which connects it over a distance of 465 kilometres (289 mi) with Dar es Salaam in the east. The city's airport, Dodoma Airport is managed by the Tanzania Civil Aviation Authority; the size of planes is limited to small private aircraft. There are plans to build a new airport outside the city with increased runway length and weight-bearing capacity. Dodoma municipal authority is also responsible for the upkeep of the nearby Hombolo Dam.

Dodoma features a semi-arid climate with relatively warm temperatures throughout the year. While average highs are somewhat consistent throughout the year, average lows dip to 13 °C (55.4 °F) in July. Dodoma averages 570 mm of precipitation per year, the bulk of which occurs during its wet season between November and April. The remainder of the year comprises the city’s dry season. 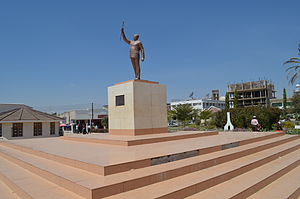 The Anglican Church also owns the only international school in Dodoma: Canon Andrea Mwaka School [2]. CAMS, established in 1950, provides education to children from Nursery to Form 4. The education is based on the English teaching curriculum and the school offers students the opportunity to take the IGCSE examinations and curriculum in Forms three and Four, where the exam papers are set from London as well as marked there. An estimated 280 students are taught and a majority of teachers are well trained international volunteers.

The city can be reached by flights operated by Auric Air[8] at Dodoma Airport.

The city is represented in the Tanzanian Premier League by football clubs Polisi Dodoma and JKT Ruvu Stars. Football is admired by most children and teenagers in Dodoma. Played on a regular basis, football is a hobby that is the favourite of most young boys in Dodoma. Interest in other sports (such as volleyball, basketball, and even rugby) is gradually increasing, but is still a distance away from the reputation football has achieved in the city.