Dolemite Is My Name

Dolemite Is My Name is a 2019 American biographical comedy film directed by Craig Brewer and written by Scott Alexander and Larry Karaszewski. The film stars Eddie Murphy as filmmaker Rudy Ray Moore, who is best known for having portrayed the character of Dolemite in both his stand-up routine and a series of blaxploitation films, which started with Dolemite in 1975.

The film had its world premiere at the Toronto International Film Festival on September 7, 2019, and was released in a limited release on October 4, 2019, before digital streaming on October 25, 2019, by Netflix. The film received positive reception from both audiences and film critics, with praise for Murphy's performance and the humor. It was chosen by both the National Board of Review and Time magazine as one of the ten best films of the year.[2][3] At the 77th Golden Globe Awards, the film was nominated for Best Motion Picture – Musical or Comedy and Best Actor for Murphy.[4]

In 1970s Los Angeles, Rudy Ray Moore is a struggling artist working in a record store, trying to get his music on the air in the in-store radio station. At night, he moonlights as an MC for his friend Ben Taylor and Taylor's musical group at a club. He asks the owner of the club for some time to do comedy, but the owner turns him down. At the record store one day, a homeless man named Ricco comes wandering in and begins making loud, rhyming proclamations; one of which includes the name “Dolemite”. (The real Moore recorded a number of prominent street poets, including Big Brown.) Moore gets the idea to create a stage persona telling these stories at the club, where he works. Dressing in pimp attire and brandishing a cane, Moore takes the stage at the club as Dolemite and launches into a crudely humorous and foul-mouthed routine titled "The Signifying Monkey". Taylor and his group join him on-stage to back him up. The crowd applauds.

Moore asks his aunt for money to record a comedy album entitled “Eat Out More Often”. He gets his friend Jimmy Lynch to record him at his home in front of an audience. After making several copies of the record, Moore begins to sell them out of the trunk of his car. The record proves to be very popular, obtaining the attention of a record company who agree to market it to record stores. Moore offers to go on tour through the Deep South to promote the record. While in Mississippi, he befriends a single mother named Lady Reed and convinces her to join him as part of his tour.

Moore and his friends celebrate the success of the tour by taking in a movie, The Front Page. The majority-white audience of the theater finds the film hilarious but Moore and his friends do not. Moore gets the inspiration to make a film starring himself as Dolemite. After being turned down by a film executive, Moore asks his record company for an advance on royalties from his albums to fund the movie himself. The record executives agree to do so, but warn Moore if he fails that he will be in debt to them for the rest of his life.

Moore gets in contact with playwright Jerry Jones who, despite initial reluctance, agrees to write the screenplay. Moore and Taylor go to a strip club and find character actor D'Urville Martin and offer him a role in their Dolemite film. Martin is offended by their offer until Moore gives him the opportunity to direct the film himself. Moore and his friends convert the old, abandoned Dunbar Hotel into a makeshift soundstage. Jones invites a group of white film students from UCLA to work as the film's crew, including Nicholas Josef von Sternberg as the cinematographer.

Moore, Martin, Jones and crew begin filming Dolemite, a kung-fu-themed blaxploitation film. Moore's lack of knowledge of karate and predilection towards camp disgusts Martin. Despite much of the cast and crew having a lot of fun making the film, Martin quickly abandons the crew after filming is completed, but not before belittling the others and proclaiming that the film will never be seen by anyone. Martin's words seem to be true as no film distributor agrees to purchase the film. Moore decides to return to touring, though with much less enthusiasm. In Indiana, Moore is asked about the film's release by a local DJ and remains noncommittal about whether the film will ever be seen. The DJ says that he could premiere the film in town with the right amount of promotion. Deciding to take him up on the offer, Moore promotes the film single-handedly all around town. Though he spends a lot of money on four wall distribution, Moore is pleased to see a massive crowd waiting outside the theater, and the audience greatly enjoys the film.

Hollywood film executive Lawrence Woolner, whose studio Dimension Pictures had turned down Dolemite previously, finds out about the premiere in Indiana and contacts Moore with the promise of distributing the film. Moore arrives at Dimension Pictures dressed as Dolemite along with Lady Reed and the crew dressed up as well. The executive says that although Moore could continue promoting the film himself, he would not see profits right away. However, Dimension Pictures could put the film in theaters and everyone would profit. Moore agrees and begins working on promoting the film professionally. En route to the Hollywood premiere of the film, Moore and the cast read negative reviews of the film that lower their spirits. Upon arrival, however, the group is astonished to see an even bigger crowd of people cheering for them outside the theater. While the cast and crew go inside the theater to see the film, Moore stays outside to entertain the crowd who have to wait for the next show.

The film's epilogue notes that Rudy Ray Moore continued to tour and star in sequels to Dolemite until his death in 2008. He is today considered to be the "Godfather of Rap". Footage from the real Dolemite movie is shown as well.

Murphy has stated that a biopic of Rudy Ray Moore had long been a dream project for him. Murphy initially met screenwriters Scott Alexander and Larry Karaszewski in 2003 and they began developing the project. Murphy arranged a meeting between the two writers with Moore, who told him many of his life stories before his death in 2008.[7] However, the early attempts to make the film never came to fruition.

On June 7, 2018, it was announced that Craig Brewer would direct Dolemite Is My Name from a script by Scott Alexander and Larry Karaszewski with Netflix producing and distributing. Eddie Murphy was set to star as Moore.[8][9] Later that month, the rest of the principal cast was announced.[10][11][12][13] In July 2018, Chris Rock and Ron Cephas Jones joined the cast.[14] Principal photography began on June 12, 2018.[15] Nicholas Josef von Sternberg, the director of photography of the original Dolemite, visited the set during filming, and according to Brewer, contributed additional stories that didn't make it into the film.[16]

Dolemite Is My Name had its world premiere at the Toronto International Film Festival on September 7, 2019.[17] It was released in a limited release on October 4, 2019 and digital streaming on October 25, 2019.[18] 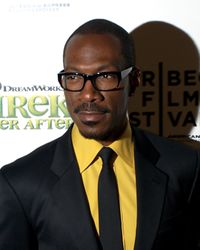 On review aggregator website Rotten Tomatoes, the film has an approval rating of 97% based on 231 reviews, with an average rating of 7.90/10. The website's critics consensus reads: "In dramatizing Rudy Ray Moore's stranger-than-fiction story, Eddie Murphy makes Dolemite Is My Name just as bold, brash, and ultimately hard to resist as its subject."[19] On Metacritic, it has a weighted average score of 76 out of 100, based on 39 critics, indicating "generally favorable reviews".[20]

In Variety, Owen Gleiberman described Murphy's performance as some kind of a comeback, writing: "As the brash hustler who made Dolemite, Eddie Murphy has his best role in years in a film that's like a blaxploitation answer to The Disaster Artist... He plays Rudy as a cheap but priceless carny barker of his own ego."[21] In the Washington Free Beacon, John Podhoretz compared Dolemite Is My Name to Ed Wood as "a tribute to an entrepreneur" and wrote, "Murphy is just glorious here, deserving of an Oscar he almost surely will not get. This is a beautifully and carefully crafted performance in which the greatest comic talent of his generation succeeds in dimming some of his own extraordinary luster to capture Moore's knowing but essential mediocrity."[22]