The Borei class (Russian: Борей; sometimes transliterated as Borey, also known as the Dolgorukiy class after the name of the lead vessel, Yury Dolgorukiy) is the new class of nuclear-powered ballistic missile submarine produced by Russia and operated by the Russian Navy, while the Yasen-class submarine is the new Russian attack submarine. The class is intended to replace the Delta III, Delta IV and Typhoon classes now in Russian Navy service. The class is named after Boreas, the North wind.

Despite being a replacement for many types of submarines, the Borei-class submarines are slightly smaller than the Typhoon-class in terms of length (170 m (560 ft) as opposed to 175 m (574 ft))[3] and crew (107 people). These changes were in part designed to reduce the cost to build and maintain the submarines.

The first design work was laid down in mid-1980s and the build of the first unit of the Borei class (officially designated "Project 955") started in 1996. (A short-lived, smaller parallel design appeared in the mid-1980s was designated Project 935 Borei II[4]) A new submarine-launched ballistic missile was developed in parallel, called the R-39UTTH "Bark". However, the work on this missile was abandoned, and a new missile called the Bulava was designed. The submarine needed to be redesigned to accommodate the new missile, and the project name was changed to Project 955. The vessels are being built at the Northern Machinebuilding Enterprise (Sevmash) in Severodvinsk, and were designed by the Rubin Marine Equipment Design Bureau (Rubin). Because of the repeated failures during Bulava test launches, some experts have suggested that the Borei submarine could instead be armed with R-29RMU Sineva missiles.[5] The Sineva is already in active duty on the Delta IV-class submarine.

Advances include a compact and integrated hydrodynamically efficient hull for reduced broadband noise and the first ever use of pump-jet propulsion on a Russian nuclear submarine.[6] The Borei submarines are approximately 170 metres (560 ft) long, 13 metres (43 ft) in diameter, and has a maximum submerged speed of at least 46 kilometres per hour (25 kn; 29 mph). They are equipped with a floating rescue chamber designed to fit in the whole crew.[7]

Smaller than the Typhoon class, the Boreis were initially slated to carry 12 missiles but are able to carry four more due to the decrease in mass of the 36-ton Bulava SLBM (a modified version of the Topol-M ICBM) over the originally proposed R-39UTTH Bark. Cost is some

A fifth generation successor/supplement is already in development.[11]

The launch of the first submarine of the class, Yury Dolgorukiy (Юрий Долгорукий), was scheduled for 2002 but was delayed because of budget constraints. The vessel was eventually rolled out of its construction hall on 15 April 2007 in a ceremony attended by many senior military and industrial personnel.[12][13] Yury Dolgorukiy was the first Russian strategic missile submarine to be launched in seventeen years since the end of the Soviet era. Currently, there are three more Borei-class submarines under construction, named Alexander Nevsky (Александр Невский), Vladimir Monomakh (Владимир Мономах) and Knyaz Vladimir (Князь Владимир). The planned contingent of eight strategic submarines is expected to be commissioned within the next decade (five Project 955 are planned for purchase through 2015[14]). 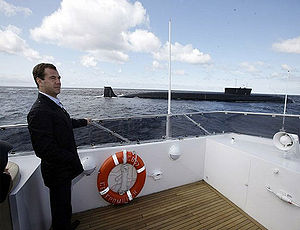 President Dmitry Medvedev with the submarine Yury Dolgorukiy in the background

Although Yury Dolgorukiy was officially rolled out of its construction hall on 15 April 2007 the submarine was not put into the water until February 2008. By July 2009 it had yet to be armed with Bulava missiles and was therefore not fully operational, although ready for sea trials on 24 October 2008.[15] On 21 November 2008 the reactor on Yury Dolgorukiy was activated[16] and on 19 June 2009 began its sea trials in the White Sea. In August 2009 it was reported that the submarine would undergo up to six trials before being commissioned but the problem with the Bulava missile could delay it even more.[17]

On 28 September 2010 Yury Dolgorukiy completed company sea trials.[18][19] By late October the Russian Pacific Fleet was fully prepared to host Russia's new Borei-class strategic nuclear-powered submarines.[20] It is expected that four subs will be deployed in the Northern fleet and four subs in the Pacific fleet.[21] On 9 November 2010 Yury Dolgorukiy passed all sea trials directed to new equipment and systems.[22]

Initially, the plan was to conduct the first torpedo launches during the ongoing state trials in December 2010 and then in the same month conduct the first launch of the main weapon system, R-30 (RSM-56) Bulava missile.[23] The plan was then postponed to mid-summer 2011 due to ice conditions in the White Sea.[24]

On 28 June 2011 a Bulava missile was launched for the first time from the Borei-class submarine Yury Dolgorukiy. The test was announced as a success.[28][29] After long delays finally the lead vessel, Yury Dolgorukiy, joined the Russian Navy on 10 January 2013. The official ceremony raising the Russian Navy colors on the submarine was led by Russian Defense Minister Sergey Shoigu. Commenting on the news on Twitter, Russian Deputy Prime Minister Dmitry Rogozin, posted: “Tremble, bourgeoisie! You’re done with!".[30] It was actively deployed in 2014 after a series of exercises.[31][32]

It has been reported that the arrival of the Borei-class submarines will enable the Russian Navy to resume strategic patrols in southern latitudes that have not seen a Russian missile submarine in 20 years.[33]

On 15 December 2009, a Defense Ministry official announced that the laying down of the fourth Borei-class submarine had been postponed from December to the first quarter of 2010. The reason for the delay was said to be "organizational and technical reasons".[34] The fourth ship of the class will be constructed under a new 955A modification, which will increase the missile complement from 16 to 20.[35]

The contract for five 955A submarines was delayed several times due to price dispute between the Russian MOD and the United Shipbuilding Corporation. The contract for modified 955A was finally signed on May 28, 2012.[36]

The first 955A submarine, Knyaz Vladimir, was laid down on 30 July 2012. Russian president Vladimir Putin attended the ceremony. Two additional 955A submarines have been laid down in 2014.