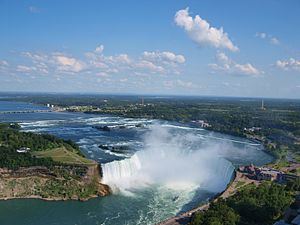 Erosion of dolostone over weaker shale created the Niagara Escarpment. 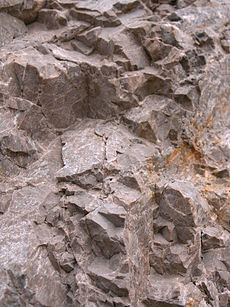 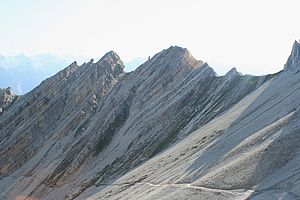 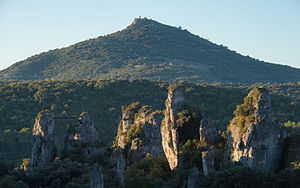 Dolostone or dolomite rock is a sedimentary carbonate rock that contains a high percentage of the mineral dolomite, CaMg(CO3)2. In old U.S.G.S. publications it was referred to as magnesian limestone. However, the term is now reserved for magnesium deficient dolostones or magnesium rich limestones. Technically, dolostone has a stoichiometric ratio of nearly equal amounts of magnesium and calcium. Most dolostones formed as a magnesium replacement of limestone or lime mud prior to lithification.[1] It is resistant to erosion and can either contain bedded layers or be unbedded. It is less soluble than limestone in weakly acidic groundwater, but it can still develop solution features over time. Dolostone can act as an oil and natural gas reservoir.

The process of conversion of calcite to dolomite is known as dolomitization and any intermediate product is known as "dolomitic limestone."[2]

The "dolomite problem" refers to the vast worldwide depositions of dolostone in past geologic record eluding a unified explanation for their formation.