Donald James Yarmy (April 13, 1923 – September 25, 2005), known professionally as Don Adams, was an American actor, comedian and director. In his five decades on television, he was best known as Maxwell Smart (Agent 86) in the television situation comedy Get Smart (1965–70, 1995), which he also sometimes directed and wrote. Adams won three consecutive Emmy Awards for his portrayal of Smart (1967–69). He provided the voices for the animated series Tennessee Tuxedo and His Tales (1963–66) and Inspector Gadget (1983–85; as well as several revivals and spinoffs in the 1990s).

Adams was born in Manhattan, New York,[1] son of William Yarmy, and his wife, Consuelo (Deiter). Adams and his brother Richard (who later became an actor, known as Dick Yarmy) were each raised in the religion of one parent: Don in the Roman Catholic faith of their mother, and Dick in the Jewish faith of their father.[2]

Dropping out of New York City's DeWitt Clinton High School (comedian Larry Storch was a classmate), Adams worked as a theater usher.[3] During World War II, he joined the United States Marine Corps. Adams participated in the Battle of Guadalcanal in the Pacific Theater of Operations. His combat service was short-lived; he was shot and contracted blackwater fever, a serious complication of malaria, known for a 90% rate of fatality. He was evacuated and then hospitalized for more than a year at a Navy hospital in Wellington, New Zealand.[1][4][5] After his recovery, he served as a Marine drill instructor in the United States.[6][7]

He later worked as a comic, taking the stage name of Adams after marrying singer Adelaide (Dell) Efantis, who performed as Adelaide Adams. They had four daughters, and Adams also worked as a commercial artist and restaurant cashier to help support his family. When they divorced, he kept Adams as his stage name because acting auditions were often held in alphabetical order.[1]

Adams' work on television began in 1954, when he won on Arthur Godfrey's Talent Scouts with a stand-up comedy act written by boyhood friend Bill Dana. In the late 1950s, he made eleven appearances on The Steve Allen Show where Dana was part of the writing team. During the 1961-63 television seasons he was a regular on NBC's The Perry Como Show as part of The Kraft Music Hall Players. He had a role on the NBC sitcom The Bill Dana Show (1963–65) as a bumbling hotel detective named Byron Glick[8]

Creators Mel Brooks and Buck Henry, prompted by producers Dan Melnick and David Susskind,[1] wrote Get Smart as the comedic answer to the successful 1960s spy television dramas such as The Man from U.N.C.L.E., The Avengers, I Spy and others. They were asked to write a spoof that combined elements from two of the most popular film series at the time: the James Bond and Pink Panther (Inspector Clouseau) movies.

Get Smart had been written for Tom Poston, to be piloted on ABC; when ABC turned it down, the show was picked up by NBC, which cast Adams in the role because he was already under contract.[1] When Get Smart debuted in 1965, it was an immediate hit. Barbara Feldon co-starred as Max's young and attractive partner (later wife), Agent 99, where she had a great chemistry with Adams throughout the show's run, despite a 10-year age difference, and they became best friends during and after. Although the two were married "on screen", they were never married to each other.

Adams gave the character a clipped, unique speaking style. Feldon said, "Part of the pop fervor for Agent 86 was because Don did such an extreme portrayal of the character that it made it easy to imitate."[citation needed] Adams created many popular catch-phrases (some of which were in his act prior to the show), including "Sorry about that, Chief", "Would you believe ...?", "Ahh ... the old [noun] in the [noun] trick. That's the [number]th time this [month/week]." (sometimes the description of the trick was simply, "Ahh... the old [noun] trick."), and "Missed it by 'that much'." These helped make the series a hit in over 100 countries.[citation needed]

In addition to acting, Adams also produced and directed several episodes of the show. He was nominated for Emmys four seasons in a row, between 1966 and 1969, for Outstanding Continued Performance by an Actor in a Leading Role in a Comedy Series. He won the award three times. The show moved to CBS for its final season, with ratings declining, as spy series went out of fashion. Get Smart was canceled in 1970, after 138 episodes.[citation needed]

Adams was happy about the show's cancellation, since he wanted to move on to other projects. His efforts after Get Smart were less successful, including the comedy series The Partners (1971–72), a game show called Don Adams' Screen Test (1975–76) and three attempts to revive the Get Smart series in the 1980s. His movie, The Nude Bomb, was unsuccessful at the box-office. Adams had been typecast as Maxwell Smart and was unable to escape the image, though he did have success as the voice of Inspector Gadget.

He earned most of his income from his work on stage and in nightclubs. As Adams had chosen a low salary combined with a one-third ownership stake in Get Smart during the show's production, he received a regular income for many years due to the show's popularity in reruns.[1]

Don Adams' Screen Test was a syndicated game show which lasted 26 episodes during the 1975–76 season. The show was done in two 15-minute segments, in each of which a randomly selected audience member would 'act' to re-create a scene from a Hollywood movie as accurately as possible. Such moments as the bar scene from The Lost Weekend, the duel scene from The Prisoner of Zenda or the beach scene from From Here to Eternity were used, with Adams directing and a celebrity guest playing the other lead in the scene. Hokey effects, bad timing, forgotten lines, prop failures and the celebrity's "ad libs" were maximized for comic effect as the audience watched "bloopers" and "outtakes" as they happened. At the end of the program, the final, serious, fully edited version of the "screen test" of each of the two contestants would be played, with audience reaction determining the winner, who would receive a trip to Hollywood and a real screen test for a motion picture.

File:NewSDMovies DonAdams.JPG
Don Adams in animated form in an episode of The New Scooby Doo Movies, "The Exterminator"

Adams was the voice of the title character in Tennessee Tuxedo and His Tales (1963–66), but he was more famous as the voice of Inspector Gadget in the initial run of that television series (1983–86) and the Christmas special, as well as in later reprises such as Inspector Gadget's Field Trip until his retirement from voicing Inspector Gadget in 1999; he even voiced himself in animated form for a guest shot in an episode of Hanna-Barbera's The New Scooby-Doo Movies, "The Exterminator," which first aired on CBS October 6, 1973.[citation needed]

Starting in 1982, Adams resurrected the Maxwell Smart character for a series of television commercials for Savemart, a retail chain that sold audio and video equipment.[9] He also appeared in the film Jimmy the Kid (1982), and played a cameo role as a harbormaster in Back to the Beach (1987).[citation needed]

He attempted a situation-comedy comeback in Canada with Check it Out! in 1985; the show ran for three years in Canada, but it was not successful in the United States. The show also starred Gordon Clapp, an unknown actor at the time, who developed a rapport with Adams.

In an A&E Biography, Adams said that he made more money working on the series, better than on Get Smart. He reprised his Maxwell Smart role on Get Smart for Fox in 1995, which co-starred Barbara Feldon and rising star Andy Dick as Max and 99's only son. Unlike the original version, this show did not appeal to younger viewers and it was canceled after only seven episodes. He later went on to voice the character of Principal Hickley in the late-1990s/early-2000s Disney cartoon, Pepper Ann.[citation needed]

Adams was the voice of Brain the Dog in the end credits for the film version of Inspector Gadget in 1999 which was his last voice role before his death six years later.[citation needed]

Adams was married three times, to Adelaide Efantis, Dorothy Bracken, and Judy Luciano.[5] His brother, Richard Paul Yarmy, also known as Dick Yarmy (February 14, 1932 – May 5, 1992), was an actor. His sister, Gloria Yarmy Burton, was a writer.[10]

Adams was an avid gambler; according to his longtime friend Bill Dana, "He could be very devoted to his family if you reminded him about it, [but] Don's whole life was focused around gambling."[11] 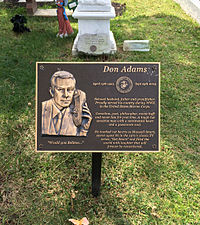 Adams died on September 25, 2005 at Cedars-Sinai Medical Center in Los Angeles, California. He suffered from lymphoma and a lung infection.[5] Before he died, he joked about not wanting a mournful funeral, preferring, he said, to have his friends get together "and bring me back to life."[12] This was a line he said to Agent 99 in season 2, disc 2, 1966.

Among his eulogists were his decades-long friends Barbara Feldon, Don Rickles, James Caan (who would star in the 2008 film adaptation) and Bill Dana, and his son-in-law, actor Jim Beaver (widower of Adams's actress-daughter Cecily Adams). Although Adams had expressed a desire to be buried with military rites at Arlington National Cemetery, he was instead interred in Hollywood Forever Cemetery in Hollywood, California.[13] His non-military funeral mass was held at the Church of the Good Shepherd in Beverly Hills. Adams was survived by three of his four daughters from his first marriage, two children from his second marriage, and a daughter from his third marriage.[5] He was also survived by five grandchildren and three great-grandchildren.[1]