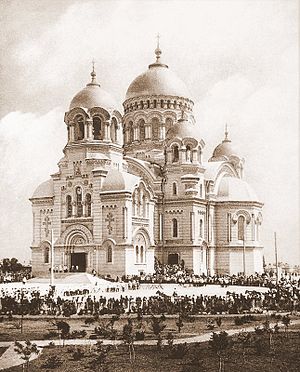 The Don Metropolitan Cathedral, Novocherkassk in 1905

The Province (Oblast) of the Don Cossack Host (Russian: Область Войска Донского, Oblast’ Voyska Donskogo) of Imperial Russia was the official name of the territory of Don Cossacks, roughly coinciding with today's Rostov Oblast of Russia. Its center was Cherkassk, later Novocherkassk.

The province comprised the areas where the Don Cossack Host settled in Imperial Russia. Since 1786 the territory was officially called the Don Host Lands (zemlya Voyska Donskogo), renamed Don Host Province in 1870.

In 1913, the oblast, with an area of about 165,000 km², had about 3.8 million inhabitants. Of these, 55% (2.1 million) were Cossacks in possession of all the land; the remaining 45% of the population being townsfolk and agricultural guest labourers from other parts of Russia.

This subdivision was abolished in 1920; from the major part of it the Don Oblast was created, which was included into the North Caucasus Krai in 1924.