From Infogalactic: the planetary knowledge core
Jump to: navigation, search
For other rivers of the same or similar name, see Don River. 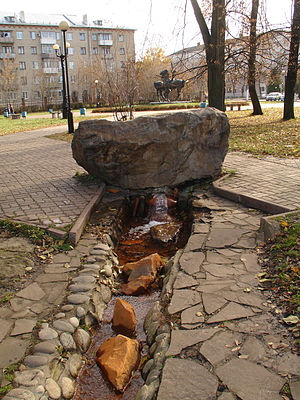 From its source, the river first flows southeast to Voronezh, then southwest to its mouth. The main city on the river is Rostov on Don. Its main tributary is the Seversky Donets. The Don basin is situated between the Dnieper basin to the west, the Volga basin to the east, and the Oka basin (tributary of the Volga) to the north.

In antiquity, the river was viewed as the border between Europe and Asia by some ancient Greek geographers.[1][2] In the Book of Jubilees, it is mentioned as being part of the border, beginning with its easternmost point up to its mouth, between the allotments of sons of Noah, that of Japheth to the north and that of Shem to the south.[citation needed] During the times of the old Scythians it was known in Greek as the Tanaïs (Τάναϊς) and has been a major trading route ever since. Tanais appears in ancient Greek sources as both the name of the river and of a city on it, situated in the Maeotian marshes.[3] Pliny gives the Scythian name of the Tanais as Silys.[4]

While the lower Don was well known to ancient geographers, its middle and upper reaches were not mapped with any accuracy before the gradual conquest of the area by Muscovy during the 16th century. The Don Cossacks, who settled the fertile valley of the river in the 16th and 17th centuries, were named after the river.

The fort of Donkov was founded by the princes of Ryazan in the late 14th century The fort stood on the left bank of the Don, about 34 kilometers (21 mi) from the modern town of Dankov, until 1568, when it was destroyed by the Crimean Tatars, but soon restored at a better fortified location. It is shown as Donko in Mercator's Atlas (1596),[5] Donkov was again relocated in 1618, appearing as Donkagorod in Joan Blaeu's map of 1645.[6]

Both Blaeu and Mercator follow the 16th-century cartographic tradition of letting the Don originate in a great lake, labelled Resanskoy ozera by Blaeu. Mercator still follows Giacomo Gastaldo (1551) in showing a waterway connecting this lake (by Gastaldo labelled Ioanis Lago, by Mercator Odoium lac. Iwanowo et Jeztoro) to Ryazan and the Oka River. Mercator shows Mtsensk (Msczene) as a great city on this waterway, suggesting a system of canals connecting the Don with the Zusha (Schat) and Upa (Uppa) centered on a settlement Odoium, reported as Odoium lacum (Juanow ozero)[7] in the map made by baron Augustin von Mayerberg, leader of an embassy to Muscovy in 1661.

In modern literature, the Don is often featured in the works of Mikhail Aleksandrovich Sholokhov, a writer from the stanitsa of Veshenskaya.[citation needed]

At its easternmost point, the Don comes near the Volga, and the Volga-Don Canal (length ca. 105 kilometres (65 mi)), connecting both rivers, is a major waterway. The water level of the Don in this area is raised by the Tsimlyansk Dam, forming the Tsimlyansk Reservoir.

Main tributaries from source to mouth: