Captain Donald Clive Anderson (18 April 1897 – 2 January 1957)[1] was an English military consultant and historian. He joined the British Indian Army before fighting in the Mesopotamia and Palestine in World War I. Anderson toured Australia before working in Sudan on The Four Feathers film in 1939,[2] working for the Ministry of Information during World War II, and following the war working on Festival of Britain.

Donald Anderson was born in Cookham, England. He probably attended the Quetta cadet college. He was commissioned on to the Unattached List, Indian Army on 15 November 1915, was admitted to the Indian Army on 18 November and was attached to 122nd Rajputana Infantry. The regiment was stationed in India at Kohat until late 1916, entraining on 1 November 1916, embarking on 3 November 1916 and landing at Basra, Mesopotamia, on 8 November 1916. He was promoted Lieutenant on 15 November 1916. In early 1918 a company was detached from the regiment and sent to Palestine to form part of a new unit, the 2nd battalion, 154th Indian Infantry. On 31 May 1918 he was posted to 2nd battalion, 154th Indian Infantry as well, being made Adjutant on 9 June 1918. The regiment formed part of 233rd Brigade, 75th Division and fought in Palestine. He held the rank of acting Captain commanding a company from 28 May 1917 to 24 September 1917, 24 September 1917 to 20 November 1917 and 17 February 1918 to 14 November 1918.

He remained in the Indian Army after the war, being promoted Captain on 15 November 1919 but retired on 15 March 1923 under the terms of the Royal Warrant of 25 April 1923, owing to the reduction of the Indian Army.

After the war Anderson returned to the Britain, visiting family in Guernsey in 1920.

An early skier, Anderson spent the winter of 1920-21 in Switzerland in Mürren, the town where the famous Kandahar ski club was set up in 1924. The name for the club is said to be named after the "Roberts of Kandahar-Cup" first run in 1911. During the 1880 Afghanistan War Lord Roberts won a battle in Kandahar.

In early 1921 Anderson sailed to Australia on the P&O ship SS Macedonia and returned to England in the early 1930s.

In 1924 with C. L. Morell, Anderson toured several stations in the Northern Territory and Queensland - Barclay Downs, Lawn Hill Station, Alexandra - before returning through Goondiwindi and Pukawidgi near Inverell in 1925. 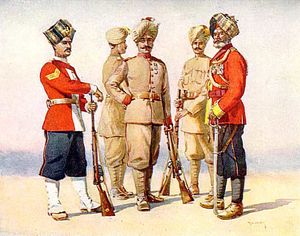 A painting depicting members of the Rajputanta Rifles, of all ranks and uniforms. circa. 1911

Anderson was the military consultant[3] for the film The Four Feathers directed by Zoltan Korda, starring John Clements, Ralph Richardson, June Duprez and C. Aubrey Smith. Captain Anderson ensured the accuracy of the military uniforms and procedure in England and Sudan. During filming, Captain Anderson dressed as a Sudanese tribesman led the charge of Khalifa's cavalry in during the filming.

During World War II, Anderson worked for the Ministry of Information using experience gained in the making of the Four Feathers. He was also the Australian specialist for the Ministry because of his time spent in Australia.

After the war Anderson worked as Chief Press Officer for the Festival of Britain in London.[4]

The son of Frank Anderson, Donald had one brother Patrick and two sisters, Blanche and Christine. Patrick died in an aeroplane crash while in the Royal Flying Corps on 19 October 1917, aged 18; he was based at Waddington, Turnhouse and Midlothian.