Donald Henry Pleasence, OBE (/ˈplɛzəns/;[1] 5 October 1919 – 2 February 1995)[2] was an English film, television, and stage actor. His most notable film roles include psychiatrist Dr. Sam Loomis in most of the Halloween series, the villain Ernst Stavro Blofeld in the James Bond film You Only Live Twice, RAF Flight Lieutenant Colin Blythe in The Great Escape, and Cul-de-sac.

Pleasence was born in Worksop, Nottinghamshire, England, the son of Alice (née Armitage) and Thomas Stanley Pleasence, a railway stationmaster.[3] He was brought up as a strict Methodist, and raised in the small village of Grimoldby, Lincolnshire.[4] Pleasence attended Ecclesfield Grammar School, in Sheffield, Yorkshire, and subsequently dropped out to work as a railway clerk, while looking for a job as an actor.[4] During the Second World War Pleasence was initially a conscientious objector, but later changed his stance and was commissioned into the Royal Air Force, serving with 166 Squadron, RAF Bomber Command. His Lancaster NE112 was shot down on 31 August 1944, during a raid on Agenville.[5][6] He was taken prisoner and placed in the German prisoner-of-war camp Stalag Luft I, where he produced and acted in plays. He would later play Flight Lieutenant Colin Blythe in The Great Escape where much of the story takes place inside a German POW camp.

In 1939 Pleasence started working in repertory theatre as an assistant stage manager with Jersey Repertory, making his acting debut with the company as Hareton in Wuthering Heights. He subsequently worked in repertory theatre in Birmingham and Bristol before making his London stage debut as Valentine in Twelfth Night in 1942.[7]

In the 1950s Pleasence's stage work included performing as Willie Mossop in a 1952 production of Hobson's Choice at the Arts Theatre and as Dauphin in Jean Anouilh's The Lark (1956).[7]

In 1960 Pleasence won acclaim as the tramp in Harold Pinter's The Caretaker at the Arts Theatre, a part he would again play in a 1990 revival.[7] Other stage work in the 1960s included Anouilh's Poor Bitos (1967) and Robert Shaw's The Man in The Glass Booth (1967), for which he won the London Variety Award for Stage Actor of the Year in 1968.[7]

Pleasence's later stage work included performing in a double bill of Pinter plays, The Basement and Tea Party, at the Duchess Theatre in 1970.[7]

Pleasence made his television debut in I Want to Be A Doctor in 1946.[7] In 1954 he received critical acclaim as Syme in a BBC adaptation of George Orwell's novel Nineteen Eighty-Four.[7] The adaptation was by Nigel Kneale and also starred Peter Cushing, another British actor who would go on to find fame in many horror-film roles.

Pleasence played Prince John in several episodes of the ITV series The Adventures of Robin Hood (1956–1958). He appeared twice with Patrick McGoohan in the British spy series, Danger Man, in episodes "Position of Trust" (1960) and "Find and Return" (1961). Pleasence's first appearance in America was in an episode of The Twilight Zone, playing an aging teacher at a boys' school in the episode "The Changing of the Guard" (1962). In 1963, he appeared in an episode of The Outer Limits entitled "The Man With the Power".

In 1973 Pleasence played the murderer in an episode of Columbo, in which Lt. Columbo took actual pity on, entitled "Any Old Port in a Storm". He also had the distinction of playing a culprit captured by Mrs. Columbo in "Murder is a Parlour Game" (1979). In 1978, he played a scout, Sam Purchas in James A. Michener's Centennial. Pleasence starred as the Reverend Septimus Harding in the BBC's 1982 TV series The Barchester Chronicles. In this series has daughter Angela Pleasence played his onscreen daughter Susan.

He hosted the 1981 Halloween episode of Saturday Night Live with music guest Fear.

In 1986, Pleasence joined Ronald Lacey and Polly Jo Pleasence for the television thriller Into The Darkness. 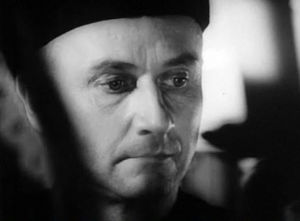 Donald Pleasence in the trailer for the 1967 film Eye of the Devil.

Pleasence made his big-screen debut with The Beachcomber (1954). Some notable early roles include Parsons in 1984 (1956), his second Orwell film, and minor roles opposite Alec Guinness in Barnacle Bill (1957) and Dirk Bogarde in The Wind Cannot Read (1958). In Tony Richardson's film of Look Back in Anger (1959) he plays a vindictive market inspector opposite Richard Burton. In the same year, Pleasence starred in the horror film, Circus of Horrors directed by Sidney Hayers, playing the role of Vanet, the owner of a circus.[8]

Endowed with a shiny bald head, a penetrating stare, and an intense voice, usually quiet but capable of a piercing scream, he specialised in portraying insane or evil characters, including the title role in Dr Crippen (1962), the double agent Dr. Michales in the (1966) sci-fi hit "Fantastic Voyage", the violent alcoholic Doc Tydon in Wake in Fright (1971), the mad Doctor in the Bud Spencer–Terence Hill film Watch Out, We're Mad (1974), Heinrich Himmler in The Eagle Has Landed (1976), and the Bond arch-villain Ernst Stavro Blofeld in You Only Live Twice (1967), the first film in which the villain's face is clearly seen. His interpretation of the character has become predominant in popular culture considering the popularity of the comic villain, Dr. Evil in the successful Austin Powers film series, which primarily parodies it. In the crime drama Hell is a City (1960) he starred opposite Stanley Baker. The film was shot on location in Manchester.

He appeared as the POW forger Colin Blythe in the 1963 film The Great Escape, who discovers that he is slowly going blind, but nonetheless participates in the mass break-out, only to be shot down by German soldiers because he is unable to see them. In The Night of the Generals (1967), he played another uncharacteristically sympathetic role, this time as an old-school German general involved in a plot to kill Adolf Hitler. In 1971, he returned to the realm of the deranged, delivering a tour de force performance in the role of an alcoholic Australian doctor in Ted Kotcheff's nightmarish outback drama Wake in Fright.

Pleasence played Lucifer in the religious epic The Greatest Story Ever Told (1965). His character taking on many dark, shadowy human disguises throughout the film was unprecedented in breathing life into the Luke 4:13 phrase "... he left Him until an opportune time ..." He was one of many stars who were given cameos throughout the film.

He also acted in Roman Polanski's Cul-de-sac (1966), in which he portrayed the love-sodden husband of a much younger French wife (Françoise Dorléac). In 1968, he ventured successfully into American cowboy territory, playing a sadistic self-styled preacher who goes after stoic Charlton Heston in the Western Will Penny.

Pleasence admired Sir Laurence Olivier,[9] with whom he worked on-stage in the 1950s, and later on the 1979 film version of Dracula. Two years earlier, Pleasence did an amusingly broad impersonation of Olivier in the guise of a horror-film actor called "Valentine De'ath" in the film The Uncanny.

During the early 1960s, Pleasence recorded several children's-story records on the Atlas Record label. These were marketed as the Talespinners series in the UK. They were also released in the United States as Tale Spinners For Children by United Artists. The stories included Don Quixote and the Brave Little Tailor.

Pleasence provided the voice-over for the British Public Information Film, The Spirit of Dark and Lonely Water in 1973. The film, intended to warn children of the dangers of playing near water, attained notoriety for allegedly giving children nightmares.

Pleasence was the author of the 1977 children's book Scouse the Mouse (London: New English Library), which was animated by Canadian animator/film director Gerald Potterton (a friend of the actor, who directed him in the 1973 Canadian film The Rainbow Boys, retitled The Rainbow Gang for VHS release in the United States) and also adapted into a children's recording (Polydor Records, 1977) with Ringo Starr voicing the book's title character, Scouse the Mouse.

In his book British Film Character Actors (1982), Terence Pettigrew described him as 'a potent combination of eyes and voice. The eyes are mournful but they can also be sinister or seedy or just plain nutty. He has the kind of piercing stare which lifts enamel off saucepans.'

Pleasence was nominated four times for the Tony Award for best performance by a leading actor in a Broadway play: in 1962 for Harold Pinter's The Caretaker, in 1965 for Jean Anouilh's Poor Bitos, in 1969 for Robert Shaw's The Man in the Glass Booth, and in 1972 for Simon Gray's Wise Child.

Pleasence was appointed an Officer of the Most Excellent Order of the British Empire for his services to the acting profession by Queen Elizabeth II in 1994.

In 1995, Pleasence died at the age of 75 in Saint-Paul-de-Vence, France, from complications of heart failure following heart valve replacement surgery.[10] His body was cremated.

Halloween H20: Twenty Years Later and Halloween Resurrection were both dedicated to the memory of Pleasence.

Dr. Evil, the character played by Mike Myers in the Austin Powers comedy films (1997–2002) and Dr. Claw from Inspector Gadget are a parodies of Pleasence's performance as Blofeld in You Only Live Twice.

Donald's grandson Jack O'Hare has gone on to be a successful director in London UK, Jak O'Hare.