The Donetsk–Krivoy Rog Soviet Republic (Russian: Донецко-Криворожская советская республика) was a self-declared Soviet republic of the Russian SFSR founded on 12 February 1918. The republic claimed self-determined territories in treaties of Brest-Litovsk; it was founded three days after the government of Ukraine signed the treaty with Germans, which recognized the borders of Ukrainian People's Republic, within which the Donetsk-Krivoy Rog Soviet Republic was located. On 29 March 1918 it became a republic within Ukrainian Soviet Republic, where it was merged with Ukrainian People's Republic of Soviets (capital in Kharkiv, founded December 25, 1917) and Odessa Soviet Republic (founded on March 1st, 1918), until the last was fully occupied by the German forces according to treaties of Brest-Litovsk .

The Donetsk–Krivoy Rog Soviet Republic claimed the territories south of the neighbouring Ukrainian People's Republic, which included the Donbass, Kharkov, Yekaterinoslav, and part of the Kherson Governorates. In the beginning, the republic's capital was the city of Kharkiv, but later with the retreat of the Red Guard it was moved to Luhansk. The Soviet government of Russia supported it as the existence of the state set an anarchy in the region.[clarification needed] The newly created government challenged the authority of the General Secretariat of Ukraine and the People's Secretariat. Some of the commissars held positions of secretaries in another Bolshevik government in Ukraine, the People's Secretariat.

The Republic was disbanded at the 2nd All-Ukrainian Congress of Soviets on 20 March 1918 when the independence of Soviet Ukraine was announced. It failed to achieve recognition, either internationally or by the Russian SFSR and in accordance with the Treaty of Brest-Litovsk was abolished.

The legacy of the Donetsk–Krivoy Rog Soviet Republic was revived during the War in Donbass that began in 2014. On 5 February 2015, the legislature of the unrecognized separatist Donetsk People's Republic (DPR) adopted a memorandum declaring the DPR to be the legal successor to the Donetsk–Krivoy Rog Soviet Republic, with Artyom as its founding father.[2] 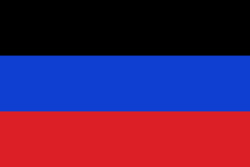 Black-blue-red tricolour has widely been attributed to the Donetsk–Krivoy Rog Republic, and is used in 2014-2015 by organizations such as the self-proclaimed Donetsk People's Republic. There is no historical record of this flag having been used in 1918, however, and the tricolour is believed to have originated with the International Movement for Donbass in the 1980s.[3][4][5]

After a government crisis and resignation of Vasilchenko, Zhakov, and Filov on 29 March 1918, Sovnarkom relocated from Kharkiv to Luhansk.