Donetsk Sergey Prokofiev International Airport (Ukrainian: Міжнародний аеропорт "Донецьк") (IATA: DOK, ICAO: UKCC) is a nonoperational airport located 10 km (6.2 mi) northwest of Donetsk, Ukraine, that was destroyed in 2014 during the War in Donbass.[2][3] It was built in the 1940s and 1950s and rebuilt in 1973 and again from 2011 to 2012. The airport is named for 20th-century composer Sergei Prokofiev, who was a native of Donetsk Oblast.

Development since the 1990s

The main terminal prior to the War in Donbass

In the 1990s, Donetsk Airport experienced a number of criminal incidents. On November 3, 1996, a group of assassins opened indiscriminate fire at the plane of prominent local businessman Yevhen Shcherban as passengers disembarked on the apron. Shcherban and his wife were killed, together with an airport ground technician and the plane's flight engineer.[4]

In accordance with the program of Donetsk for Euro 2012 in 2011, the Ukrainian construction company "Altcom" constructed a new airport terminal, which had been developed by experts from Croatia. The airline Donbassaero had its head office located at the airport,[5] but ceased operations in January 2013.[6]

Service at the airport has not resumed since the battle.[9] The terminal building was severely damaged during the fighting.[10]

On 1 October 2014, Pro-Russian rebels tried to take back the airport. A spokesman for what the Ukrainian government calls its anti-terrorist operation said Ukrainian forces repelled four attacks on the airport that evening. A T-64 tank was destroyed and seven rebels were killed, Vladyslav Seleznyov told Kanal 5 TV. A reporter for Associated Press in Donetsk said on Wednesday, October 1, there were indications the government may already have lost control of the airport. Rebel-leader Alexander Zakharchenko said it was "95%" under separatist control. Ukrainian officials insist the airport was still under government control as of October 2014.[11]

The main terminal building and the control tower have been lying in ruins as a result of the fighting in early October 2014.[12][13]

It was reported on 17 January 2015 that rebel forces claimed to have taken complete control of Sergey Prokofiev International Airport, after a series of battles with pro-government forces over the complex.[14] One day later it was reported that government forces claimed to have retaken almost all parts of the airport lost to rebels in recent weeks, after a mass operation during the night.[15] On 21 January, Ukrainian forces admitted losing control of the airport to the Donetsk People's Republic rebels.[16]

All civilian airline operations including Lufthansa, Air Berlin, Aeroflot, flydubai and many others were suspended due to armed conflict in October 2014, and the airport and its facilities were subsequently completely destroyed.[12] 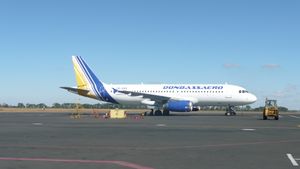 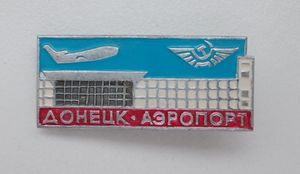