Donetsk Oblast (Ukrainian: Доне́цька о́бласть, Donets'ka oblast'; also referred to as Donechchyna – Ukrainian: Донеччина Donechchyna; Russian: Доне́цкая о́бласть, Donetskaya oblast [dɐˈnʲɛtskəjə ˈobləsʲtʲ]) is an oblast (province) of eastern Ukraine. It is the most populated oblast, with around 4.5 million residents. Its administrative center is Donetsk; however, its Regional State Administration was relocated to Mariupol, a temporary measure due to the ongoing crisis in Donetsk.[6] Historically, the region is an important part of the Donbas region. Until November 1961, it bore the name Stalino Oblast, as its capital Donetsk was named Stalino in honour of Joseph Stalin at that time.

The oblast is known for its urban sprawl and is often associated with mining industry.

On April 7, 2014, following the 2014 Crimean crisis, separatists occupying the Donetsk Oblast administrative building declared independence from Ukraine and held a referendum on separating from Ukraine on May 11, 2014. Subsequently, the War in Donbass started. After Donetsk was under control of the separatist government, the Donetsk Oblast administration was relocated to Mariupol, and later to Kramatorsk.[7]

Donetsk Oblast is located in southeastern Ukraine. The area of the oblast (26,517 km²), comprises about 4.4% of the total area of the country. The oblast borders the Dnipropetrovsk and Zaporizhia Oblasts on the southwest, the Kharkiv Oblast on the north, the Luhansk Oblast on the northeast, the Rostov Oblast in Russia on the east, and with the Sea of Azov on the south.

Its longitude from north to south is 270 km, from east to west – 190 km. The extreme points of the oblast's borders are: Bilosarayska Kosa (spit) on the south, Shevchenko of Velykonovosilkivskyi Raion on the west, Verkhnyi Kut of Shakhtarskyi Raion on the east, and Lozove of Krasnolymanskyi Raion on the north.

The state historic-architectural preserve near the city of Sviatohirsk with the Sviatohirsk Lavra was nominated for the Seven Wonders of Ukraine. 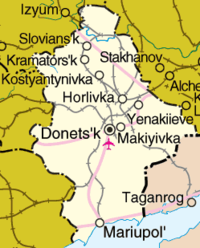 The province is primarily divided into 18 raions (districts) and 28 municipalities of equal status (22 miskradas and 6 mistos - cities of regional significance), including the provincial administrative centre Donetsk. These are listed below with their areas and populations.[8]

The province's secondary division consists of various municipalities that are governed by their councils. Those municipalities may consist of one or more populated places. All are administratively subordinate to the raion in which they are located.

The following data incorporates the number of each type of second-level administrative divisions of Donetsk Oblast: 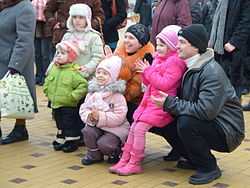 In 2013 the population of Donetsk Oblast was 4.43 million, which constituted 10% of the overall Ukrainian population, making it the most populous and most densely populated region of the country. Its large population is due to the presence of several big industrial cities and numerous villages agglomerated around them.

During the 2004 presidential election, political supporters of Viktor Yanukovych threatened to demand autonomy for Donetsk and neighbouring oblasts if the election of their candidate was not recognised. However, no official moves were ever made.

The oblast also contains 21% of the country's Muslims.[9] 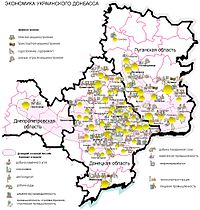 Map of the economic activity in the Donbas, including the Donetsk Oblast.

The oblast' has a developed transport infrastructure which includes the Donetsk railway (covers 40% of national transportation), the Mariupol Port, the Donetsk International Airport, passenger airports in Mariupol and Kramatorsk, and dense road systems. In the Donetsk Oblast two special economic zones have been created, Donetsk and Azov, which have a privileged tax regime.[10] 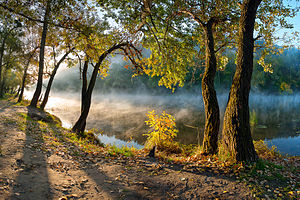 The Donetsk Oblast's climate is mostly continental, which is characterised by hot summers and relatively cold winters with changeable snow surfaces. East and southeast strong winds, high temperatures and heavy rain showers are typical in the summer. The average annual rainfall is 524 mm.

Important resources for recreation within the area are: the mild climate, the Sea of Azov coast, curative mud, sources of minerals, and radon and table water. Due to these numerous recreation resources, many resort hotels and camps are located here. There are about 26 health centres and pensions, 52 rest homes and boarding houses, and rest camps for children in the oblast.[10]

The curative[clarification needed] areas in the oblast include the Slovyansk salt lakes and mineral water sources. The oblast also contains many park zones, some of which are of great national value. They include the Khomutivsky steppe and the Azov sea coast. Overall, the Donetsk Oblast contains about 70 protected park and nature attractions including branches of the Ukrainian steppe park, six state reserves, ten memorials of nature, landscapes, and six park tracts.[10]

During the 1991 referendum, 83.90% of votes in Donetsk Oblast were in favor of the Declaration of Independence of Ukraine. A survey conducted in December 2014 by the Kyiv International Institute of Sociology found 18.5% of the oblast's population supported their region joining Russia, 53.8% did not support the idea, 22.5% were undecided, and 5.2% did not respond; insurgent-controlled areas were not polled.[11]