The Donetsk Republic (Russian: Донецкая республика, Donétskaya respúblika) is a pro-Russian separatist political party operating in the Donetsk area of Ukraine. The group's goal is the creation of a "federation of sovereign Donetsk", which would include seven regions of eastern and southern Ukraine.[2][3] The group was banned in 2007, but this ban was marginal until the 2014 Donbass War.[4][5] In 2014, it founded the Donetsk People's Republic, which Ukraine's government calls a terrorist organization.[4] The party won the Donbass general elections, 2014 with the 68,53% and 68 seats.[6] 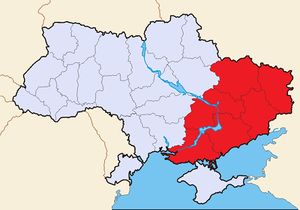 Map of Ukraine with the 2006 proposed Federal Republic of Donetsk in red.

Before the Ukrainian crisis

The organization was established on December 6, 2005 as a city organization by Andrei Purguin, Alexander Tsurkan, and Oleh Frolov and on December 9, 2005 with support of Hennadiy Prytkov as a regional organization. The main goal of the organization was to grant the eastern regions of Ukraine a special status.[5] It claimed to fight the "orange plague" of President Viktor Yushchenko.[5] Their goal was to create a Federal Republic of Donetsk in Southeast Ukraine.[7] According to a map they published in 2006 this Federal Republic of Donetsk would comprise the (Ukrainian Oblasts) Kharkiv Oblast, Luhansk Oblast, Donetsk Oblast, Dnipropetrovsk Oblast, Zaporizhia Oblast and Kherson Oblast.[7] Its pre-2014 rallies were averagedly attended by about 30-50 people.[5]

From November 17 to November 22 of 2006, its activists were conducting protests in Donetsk and were gathering signatures on creation of the Donetsk Republic.[8] Their activities were not supported by the prime minister, Viktor Yanukovych.[9]

At the beginning of 2007, representatives of the organization conducted number of activities in various cities of eastern Ukraine propagating the idea of separatism and federalization of the country.[10]

The group was banned by Donetsk's administrative regional tribunal in November 2007 on grounds of separatism. Despite this, the party continued to hold rallies.[5]

In 2014, the organization founded the Donetsk People's Republic, which Ukraine's government calls a terrorist organization.[4]

The group's leader, Andrei Purgin, was arrested by the Security Service of Ukraine during the 2014 pro-Russian unrest.[2][3]

The party won the Donbass general elections, 2014 with the 68,53% and 68 seats.[6] The Communist Party of the Donetsk People's Republic participates in the Donetsk Republic's parliamentary group.[11] In the election campaign prior to these elections only the candidate of Donetsk Republic, Alexander Zakharchenko, used billboards.[12] This resulted to the only visible campaign advertising in Donetsk being in support of Zakharchenko.[13]