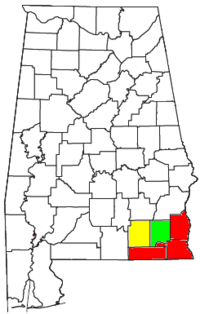 Location of the Dothan-Enterprise-Ozark CSA, with the Dothan Metropolitan Statistical Area highlighted in red

The Dothan Metropolitan Statistical Area, as defined by the United States Census Bureau, is an area consisting of three counties in southeastern Alabama, anchored by the city of Dothan. As of the 2010 census, the MSA had a population of 145,639.[1]

Places with more than 50,000 inhabitants

Places with less than 1,000 inhabitants