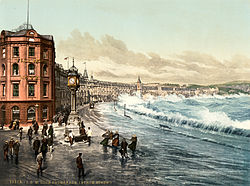 Photochrom of Loch Promenade during a storm, 1890s 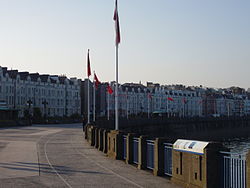 Douglas Promenade, which runs nearly the entire length of beachfront in Douglas 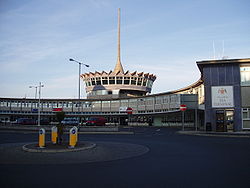 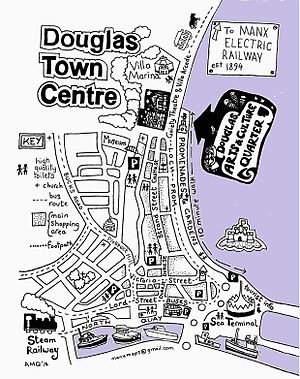 A map of the centre for Douglas Development Partnership

Douglas (Manx: Doolish) is the capital and largest town of the Isle of Man, with a population of 27,938 people (2011). It is located at the mouth of the River Douglas, and on a sweeping bay of two miles. The River Douglas forms part of the town's harbour and main commercial port.

Douglas was a small settlement until rapid growth occurred as a result of links with the English port of Liverpool in the 18th century. Further population growth came in the following century, resulting during the 1860s in a staged transfer of the High Courts, the Lieutenant Governor's residence, and finally the seat of the legislature, Tynwald, to Douglas[1] from the ancient capital, Castletown.

In the absence of any archaeological data, it is possible that the origins of the town may be revealed by analysis of the original street and plot pattern. The discovery of a bronze weapon in central Douglas,[2] and the large Ballaquayle Viking treasure hoard[3] on the outskirts, both in the 1890s, hint at the early importance of the site now occupied by Douglas. Scholars agree that the name of the town derives from Early Celtic 'Duboglassio' meaning 'black river'.[4] Douglas is twice referred to in the Monastic 'Chronicle of the Kings of Man and the Isles'; first in 1192, when the monks of St Mary's Abbey at Rushen, were transferred there for a four-year stay, then again in 1313, when Robert (Bruce), King of Scotland, spent the night at the 'monastery of Duglas' on his way to seize Castle Rushen.[5] These may be references to the site of the later Nunnery, a little upstream from the port.

The first detailed documentation shows that in 1511[6] there were only thirteen resident households in the settlement clustered north of the harbour, most of the property there classifying as "chambers"[7] (unoccupied, unheated, single-celled structures) for which rent was paid by non-residents including clergy, officials and landowners from elsewhere on the Island. This suggests that the origins of the town's nucleus were as a non-urban port.[8] Current speculation links the store-buildings with the Irish Sea Herring fishery, and the import/export trade.

In 1681 Thomas Denton described Douglas as "The place of greatest resort" on the Isle of Man, and by 1705 a clear picture of the early town emerges, with hints that its residential, market, and military defence functions were growing in importance[9] alongside the port facility. The ensuing sixty years saw the town thrive as imposing merchants' houses, large warehouses, quays and a pier were provided to accommodate the burgeoning 'Running Trade' (smuggling) : one of the stimuli for the town to expand.[10] Other forms of trade also grew, and following the Revestment Act of 1765, Douglas began to reap the benefits of trans-Atlantic trade, due to the discovery of the New World, and co-operation on a local level with Liverpool.[11] Legitimate merchants who rose to prominence over the period included the Murreys, the Moores, and the Bacons.[11] The town's later prosperity was facilitated by the low cost of living, and favourable legal status enjoyed by English debtors and half pay officers.[12] The initial growth and development of the town owed much to its natural harbour (now the Inner Harbour), since greatly expanded and improved. Over the course of the 18th century, the town's population rose significantly, from 800 (approx.) in 1710 to nearly 2,500 in 1784.

Throughout the nineteenth century, the town's demographics began to follow the same trends as the United Kingdom, due to the Industrial Revolution. The growing number of people wanting to holiday in the area, from the early nineteenth century, forged a new industry,[11] and from around 1870 onwards, the town was transformed into a leading holiday resort. Juxtaposed with this prosperity were the increasingly unsanitary conditions, and poor quality housing; this, again, reflected a trend seen across the United Kingdom.[13] The open sewage, middens (domestic waste dump), and smell from the harbour at low tide all contributed to the town's uncleanliness. Oil and gas lamps first appeared in late 1820s and 1830s, the first hospital to join the Dispensary was built in 1850, and Douglas bay became home to one of the town's most iconic pieces of scenery in 1832, when the Tower of Refuge was built to offer shelter and provisions for sailors awaiting rescue.[14] Douglas, in the first half of the nineteenth century though, was often characterized by the destitution of its population and the high number of epidemics, in particular, cholera, that they suffered from.[11]

The rise of Douglas as the social and economic stronghold of the Isle was recognised in 1869, when it became the home of the island's government, the Tynwald, and therefore the capital, an honour previously held by Castletown, a smaller town in the south of the Island. Douglas's political landscape also changed significantly in the nineteenth century, in spite of the conservatism shown by some townsfolk: in 1844 for example, at a public meeting, the idea of a town council was rejected in favour of retaining the system of Town High Bailiffs (when the Town Bill Act was passed at Tynwald in 1852, the people of Douglas again rejected the idea). However, an act passed later that decade, which did not include opt-out clauses, was accepted, and in 1860, Douglas elected its first town council, which was predominantly middle class in its makeup. The Town Commissioners were able to tackle the town's problems with greater efficiency, and by 1869, the sewage problem had been largely taken care of.[11]

The Commissioners also designed to alter the anachronistic architecture of Douglas, built during the era of fishing and trading, and no longer amenable or safe for tourists. The proportion of the Manx population living in Douglas was also expanding, with 35% living there by 1891. The Victorian and later modernisation of the town was achieved at the expense of the original maze-like layout of the oldest streets. These were cleared away in the new street schemes and slum clearances of the 1870s to 1920s. The town's infrastructure was radically altered in order to convenience tourists, and in 1878, the Loch Promenade was constructed. In 1870, there were 60,000 visitors annually, by 1884, this had grown to 182,000. In 1887, 310,916 visited for Queen Victoria's Golden Jubilee.[11]

The earliest organized services emerged between Douglas and Whitehaven, established by William Nicholson in the 1750s.[15] More formally, Nicholson's Packet Service began in 1765 or 1766, and the Post Office mail contract was secured by 1782. Sailings were irregular and heavily dependent on weather conditions. Steamer services brought a considerable improvement, the first regular link (en-route between Greenock and Liverpool) being available from 1819.[16] The formation of what became the Isle of Man Steam Packet Company in 1830 led to greatly improved services, and also laid the foundations for growth in both cargo and tourist traffic.[17]

The Royal National Lifeboat Institution (RNLI) has a lifeboat station at Douglas. The first lifeboat station in the port was established in 1802 and closed in 1895 with a period of inoperation between 1851 and 1868. In 1825 it was one of the first lifeboat stations to be provided with a purpose-built lifeboat; this was at the request of Sir William Hillary, the founder of the Institution. The current station, established in 1874, operates the Tyne-class lifeboat Sir William Hillary. There are three memorials to Sir William in Douglas: one in St George's Church where he was buried in 1847, one on Loch Promenade, and the other on Douglas Head near where in 1832 he established the Tower of Refuge.[18]

During World War I and World War II, Douglas and other parts of the Isle of Man were home to internment camps for 'enemy aliens'. Douglas held seven out of the ten Manx internment camps during World War II, including: Hutchinson, Metropole, Central, Palace, Granville and Sefton Camp. Sections of the Promenade were cordoned off and many guest houses were used for the purpose. The war dead of the island are commemorated on the Douglas War Memorial.

The town was the birthplace of the Gibb brothers, Maurice, Robin, both deceased, and Barry, the members of the Bee Gees.

Douglas was home to the Summerland leisure centre.

Douglas is situated on the east of the island near the confluence point of two rivers, the Dhoo and the Glass. At Douglas, the rivers flow through the quay and into Douglas Bay. A gently sloping valley runs inland. Hills lie to the north-west and south-east.

The town is surrounded by several other smaller towns and villages, most notably Onchan to the north (which forms a conurbation with Douglas) and Union Mills to the west.

References to education in Douglas begin in the late seventeenth century, with mention of the schoolmastership, usually combined with the Chaplaincy of Douglas, and reference to a "petty school" in 1675.[26] William Walker (1679–1729) was appointed to the mastership in 1700,[27] school being probably kept in the old Chapel, (in later Heywood Place.[28]) Later being promoted Rector of Ballaugh, and the recipient of an honorary Doctorate, Walker is now remembered in his mother's Manx Gaelic lament on her sons: "Illiam Walker as Robin Tear".[29] 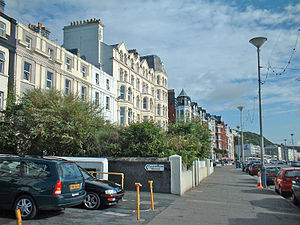 The more formal history of education in the town begins with Bishop Thomas Wilson's establishment of the Douglas Grammar School. Alderman William Dixon (a native of Douglas, but resident in Dublin since at least the 1680s[30]) agreed to hand over his parent's former home, and passed over the New Bond Street property in 1714. The Bishop raised an endowment of £500 (Irish currency), half being funded by the Barrow Trustees, most of the balance being provided by the Bishop's Douglas relatives, the Murrey family.[31] Even after this, the mastership of Douglas Grammar School continued to be combined with the Chaplaincy, now of the new Chapel of St Matthew. Details of the building of the original Grammar School are sparse, but it seems that William Murrey was deeply involved, retaining the use of the capacious storage vault under the school in lieu of repayment of £150 costs.[32]

Another notable Master of the Grammar School was Rev. Philip Moore (1705–1783) who was a native of the town, his father Robert Moore having been one of the "Undertakers" who organised the construction of St Matthews,[33] and his mother Miss Katherine Kelly. Moore was appointed Master in 1735, and was reckoned to be a good classical scholar, and have "an inherent love of teaching".[34] 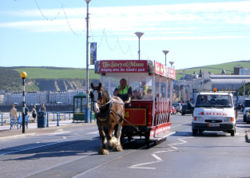 A horse tram passes a pedestrian crossing on Douglas promenade 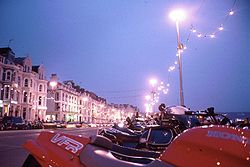 Douglas during the TT Races 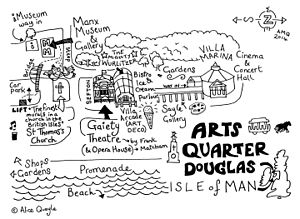 Douglas has a number of attractions and items of interest:

Douglas is the start and finish point for the Isle of Man TT which is the biggest classic roadracing event in the world.[citation needed] The race has been a part of the FIM Motorcycle Grand Prix World Championship but is not a part of the series due to the track's safety record and because the track is situated on public roads.[citation needed]

The National Sports Centre (NSC), a large multi-sports centre and athletics stadium is located on Pulrose Road. The NSC is owned by the Department of Tourism and Leisure of the Isle of Man Government and operated by the Manx Sport & Recreation. The King George V Bowl, multi-use stadium is located on Pulrose Road. It is owned by Douglas Borough Council.

Douglas is home to eight of the seventeen football clubs that compete in the Isle of Man Football League:[36][37]

A panorama of Douglas bay looking out to the sea.