From Infogalactic: the planetary knowledge core
Jump to: navigation, search
For the inverse operation, see Upload.
For other uses, see Download (disambiguation).

An image/sign for downloading to a hard disk drive (HDD)

In computer networks, to download is to receive data from a remote system, typically a server[1] such as a web server, an FTP server, an email server, or other similar systems. This contrasts with uploading, where data is sent to a remote server..

A download is a file offered for downloading or that has been downloaded, or the process of receiving such a file. 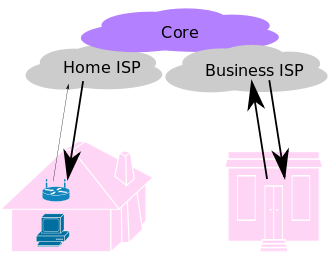 Download data is sent downstream to an end-user, upstream from the provider

Downloading generally transfers the whole data object for local storage and later use, as contrasted with streaming, where the data is used nearly immediately, while the transmission is still in progress, and which may not be stored long-term.

Increasingly, websites that offer streaming media or media displayed in-browser, such as YouTube, and which place restrictions on the ability of users to save these materials to their computers after they have been received, forbid downloading in the sense of "receive and save" rather than simply "receive". Downloading is not the same as "transferring" (i.e., sending/receiving data between two storage devices would be a transferral of data, but receiving data from the Internet would be considered a download).