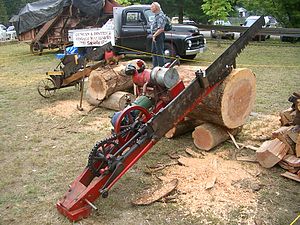 A dragsaw is an early reciprocating saw using a 1.8 m (6-foot) steel crosscut saw to buck logs to length. Prior to the popularization of the chainsaw during World War II, the dragsaw was a popular means of taking the hard work out of cutting wood.

According to one hypothesis, evidence for the use of stone-cutting dragsaws may date from the Fourth Dynasty of Egypt, about 4,500 years before its commonly accepted date of invention.[1]