From Infogalactic: the planetary knowledge core
Jump to: navigation, search
For other uses, see Dravidian (disambiguation).

Dravidian place names along the Arabian Sea coast and the Dravidian grammatical influence such as clusivity in the Indo-Aryan languages, namely Marathi, Konkani, Gujarati, Marwari and Sindhi languages, suggest that Dravidian languages were once spoken more widely across the Indian subcontinent.[4][5]

Alexander D. Campbell first suggested the existence of a Dravidian language family in 1816 in his Grammar of the Teloogoo Language,[6] in which he and Francis W. Ellis argued that Tamil and Telugu descended from a common, non-Indo-European ancestor.[7] In 1856 Robert Caldwell published his Comparative Grammar of the Dravidian or South-Indian Family of Languages,[8] which considerably expanded the Dravidian umbrella and established Dravidian as one of the major language groups of the world. Caldwell coined the term "Dravidian" for this family of languages, based on the usage of the Sanskrit word drāviḍa in the work Tantravārttika by Kumārila Bhaṭṭa.[9] In his own words, Caldwell says,

The word I have chosen is 'Dravidian', from Drāviḍa, the adjectival form of Draviḍa. This term, it is true, has sometimes been used, and is still sometimes used, in almost as restricted a sense as that of Tamil itself, so that though on the whole it is the best term I can find, I admit it is not perfectly free from ambiguity. It is a term which has already been used more or less distinctively by Sanskrit philologists, as a generic appellation for the South Indian people and their languages, and it is the only single term they ever seem to have used in this manner. I have, therefore, no doubt of the propriety of adopting it.[10]

The 1961 publication of the Dravidian etymological dictionary by T. Burrow and M. B. Emeneau proved a notable event in the study of Dravidian linguistics.

As for the origin of the Sanskrit word drāviḍa itself, researchers have proposed various theories. Basically the theories deal with the direction of derivation between tamiẓ and drāviḍa. There is no definite philological and linguistic basis for asserting unilaterally that the name Dravida also forms the origin of the word Tamil (Dravida → Dramila → Tamizha or Tamil). Kamil Zvelebil cites the forms such as dramila (in Daṇḍin's Sanskrit work Avanisundarīkathā) damiḷa (found in the Sri Lankan (Ceylonese) chronicle Mahavamsa) and then goes on to say, "The forms damiḷa/damila almost certainly provide a connection of dr(a/ā)viḍa " and "... tamiḷ < tamiẓ ...whereby the further development might have been *tamiẓ > *damiḷ > damiḷa- / damila- and further, with the intrusive, 'hypercorrect' (or perhaps analogical) -r-, into dr(a/ā)viḍa. The -m-/-v- alternation is a common enough phenomenon in Dravidian phonology"[11] Zvelebil in his earlier treatise states, "It is obvious that the Sanskrit dr(a/ā)viḍa, Pali damila, damiḷo and Prakrit d(a/ā)viḍa are all etymologically connected with tamiẓ", and further remarks, "The r in tamiẓ → dr(a/ā)viḍa is a hypercorrect insertion, cf. an analogical case of DED 1033 Ta. kamuku, Tu. kangu "areca nut": Skt. kramu(ka)."[12]

Joseph (1989: IJDL 18.2:134-42) gives extensive references to the use of the term draviḍa, dramila first as the name of a people, then of a country. Sinhala BC inscriptions cite dameḍa-, damela- denoting Tamil merchants. Early Buddhist and Jaina sources used damiḷa- to refer to a people of south India (presumably Tamil); damilaraṭṭha- was a southern non-Aryan country; dramiḷa-, dramiḍa, and draviḍa- were used as variants to designate a country in the south (Bṛhatsamhita-, Kādambarī, Daśakumāracarita-, fourth to seventh centuries AD) (1989: 134–138). It appears that damiḷa- was older than draviḍa- which could be its Sanskritization.

Based on what Krishnamurti states (referring to a scholarly paper published in the International Journal of Dravidian Linguistics), the Sanskrit word draviḍa itself is later than damiḷa since the dates for the forms with -r- are centuries later than the dates for the forms without -r- (damiḷa, dameḍa-, damela- etc.). The Monier-Williams Sanskrit Dictionary lists for the Sanskrit word draviḍa a meaning of "collective Name for 5 peoples, viz. the Āndhras, Karṇāṭakas, Gurjaras, Tailaṅgas, and Mahārāṣṭras".[14]

The Dravidian languages form a close-knit family. They are descended from the Proto-Dravidian language. There is reasonable agreement on how they are related to each other. Most scholars agree on four groups: North, Central (Kolami–Parji), South-Central (Telugu–Kui) and South Dravidian. Earlier classifications grouped Central and South-Central Dravidian in a single branch. The classification below follows Krishnamurti in grouping South-Central and South Dravidian.[15] Languages recognized as official languages of India appear here in boldface.

Some authors deny that North Dravidian forms a valid subgroup, splitting it into Northeast (Kurukh–Malto) and Northwest (Brahui).[16] Their affiliation has been proposed primarily based on a small number of common phonetic developments, including:

McAlpin (2003)[17] notes that no exact conditioning can be established for the first two changes, and proposes that distinct Proto-Dravidian *q and *kʲ should be reconstructed behind these correspondences; and that Brahui, Kurukh-Malto and the rest of Dravidian may be three coordinate branches, possibly with Brahui being the earliest language to split off. A few morphological parallels between Brahui and Kurukh-Malto are also known, but according to McAlpin they are analyzable as shared archaisms rather than shared innovations.

Approximately 29% of India's population spoke Dravidian languages in 1981.[18] The proportion has fallen due to lower birth rates compared to the Indo-Aryan speakers and according to 2001 census, about 21.5% or 220 million of total population of 1.02 billion were Dravidian speakers.[19]

The origins of the Dravidian languages, as well as their subsequent development and the period of their differentiation are unclear, partially due to the lack of comparative linguistic research into the Dravidian languages. Among Indian languages, Tamil has the most ancient non-Sanskritised Indian literature.[20] The earliest records in Old Tamil are short inscriptions from around the 2nd century BC in caves and on pottery. These inscriptions are written in a variant of the Brahmi script called Tamil Brahmi.[21] The earliest long text in Old Tamil is the Tolkāppiyam, an early work on Tamil grammar and poetics, whose oldest layers could be as old as the 1st century BC.

Although in modern times speakers of the various Dravidian languages have mainly occupied the southern portion of India, nothing definite is known about the ancient domain of the Dravidian parent speech. The Brahui, Kurukh and Malto have myths about external origins.[22] The Kurukh have traditionally claimed to be from the Deccan Peninsula,[23] more specifically Karnataka. The same tradition has existed of the Brahui,[24][25] who call themselves immigrants.[26] Many scholars hold this same view of the Brahui[27] such as L. H. Horace Perera and M. Ratnasabapathy.[28] Proto-Dravidian is thought to have differentiated into Proto-North Dravidian, Proto-Central Dravidian, Proto South-Central Dravidian and Proto-South Dravidian around 500 BC, although some linguists have argued that the degree of differentiation between the sub-families points to an earlier split.

Relationship to other language families 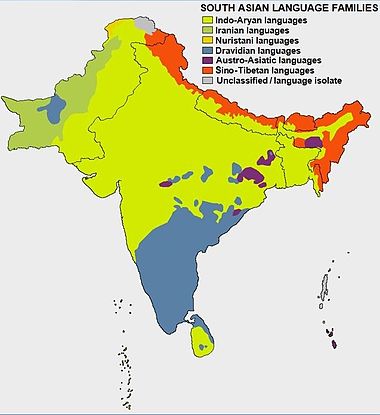 Despite many proposals, scholars have not shown a systematic relationship between the Dravidian languages and any other language family. Nonetheless, while there are no readily detectable genealogical connections, Dravidian shares strong areal features with the Indo-Aryan languages, which have been attributed to a substratum influence from Dravidian.[29] The earliest known Dravidian inscriptions are 76 Old Tamil inscriptions on cave walls in Madurai and Tirunelveli districts in Tamil Nadu, dating from the 2nd century BC.[30]

The Dravidian family has defied all of the attempts to show a connection with other languages, including Indo-European, Hurrian, Basque, Sumerian, and Korean. Comparisons have been made not just with the other language families of the Indian subcontinent (Indo-European, Austroasiatic, Sino-Tibetan, and Nihali), but with all typologically similar language families of the Old World.

Dravidian languages display typological similarities with the Uralic language group, suggesting to some a prolonged period of contact in the past.[31] This idea is popular amongst Dravidian linguists and has been supported by a number of scholars, including Robert Caldwell,[32] Thomas Burrow,[33] Kamil Zvelebil,[34] and Mikhail Andronov.[35] This hyphothesis has, however, been rejected by some specialists in Uralic languages,[36] and has in recent times also been criticised by other Dravidian linguists such as Bhadriraju Krishnamurti.[37]

Dravidian is one of the primary language families in the Nostratic proposal, which would link most languages in North Africa, Europe and Western Asia into a family with its origins in the Fertile Crescent sometime between the last Ice Age and the emergence of proto-Indo-European 4–6 thousand years BC. However, the general consensus is that such deep connections are not, or not yet, demonstrable. McAlpin (1975) proposed linking Dravidian languages with the ancient Elamite language of what is now southwestern Iran. However, despite decades of research, this Elamo-Dravidian language family has not been demonstrated to the satisfaction of other historical linguists.

Dravidian languages show extensive lexical (vocabulary) borrowing, but only a few traits of structural (either phonological or grammatical) borrowing from Indo-Aryan, whereas Indo-Aryan shows more structural than lexical borrowings from the Dravidian languages.[38] Many of these features are already present in the oldest known Indo-Aryan language, the language of the Rigveda (c. 1500 BC), which also includes over a dozen words borrowed from Dravidian.[39]

In addition, a number of grammatical features of Vedic Sanskrit not found in its sister Avestan language appear to have been borrowed from Dravidian languages. These include the gerund, which has the same function as in Dravidian, and the quotative marker iti.[45] Some linguists explain this asymmetrical borrowing by arguing that Middle Indo-Aryan languages were built on a Dravidian substratum.[46] These scholars argue that the most plausible explanation for the presence of Dravidian structural features in Indic is language shift, that is, native Dravidian speakers learning and adopting Indic languages.[47] Although each of the innovative traits in Indic could be accounted for by internal explanations, early Dravidian influence is the only explanation that can account for all of the innovations at once; moreover, it accounts for the several of the innovative traits in Indic better than any internal explanation that has been proposed.[48]

The Brahui population of Balochistan has been taken by some as the linguistic equivalent of a relict population, perhaps indicating that Dravidian languages were formerly much more widespread and were supplanted by the incoming Indo-Aryan languages.[49][50][51] However it has been argued that the absence of any Old Iranian (Avestan) loanwords in Brahui suggests that the Brahui migrated to Balochistan from central India less than 1000 years ago. The main Iranian contributor to Brahui vocabulary, Balochi, is a western Iranian language like Kurdish, and arrived in the area from the west only around 1000 AD.[52] Sound changes shared with Kurukh and Malto also suggest that Brahui was originally spoken near them in central India.[53]

The most characteristic grammatical features of Dravidian languages are:[34]

Dravidian languages are noted for the lack of distinction between aspirated and unaspirated stops. While some Dravidian languages have accepted large numbers of loan words from Sanskrit and other Indo-Iranian languages in addition to their already vast vocabulary, in which the orthography shows distinctions in voice and aspiration, the words are pronounced in Dravidian according to different rules of phonology and phonotactics: aspiration of plosives is generally absent, regardless of the spelling of the word. This is not a universal phenomenon and is generally avoided in formal or careful speech, especially when reciting. For instance, Tamil does not distinguish between voiced and voiceless stops. In fact, the Tamil alphabet lacks symbols for voiced and aspirated stops. Dravidian languages are also characterized by a three-way distinction between dental, alveolar, and retroflex places of articulation as well as large numbers of liquids.

The following consonantal phonemes are reconstructed:[42][43][57]

The numerals from 1 to 10 in various Dravidian and Indo-Aryan languages (here exemplified by Hindi, Sanskrit and Marathi).[citation needed]