From Infogalactic: the planetary knowledge core
Jump to: navigation, search
This article is about Australian Aboriginal Mythology. For other uses, see Dreamtime (disambiguation). 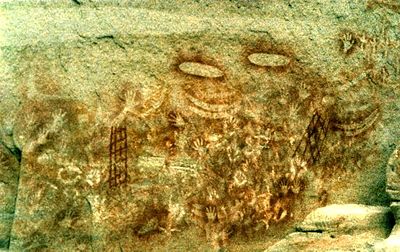 Dreamtime (also dream time, dream-time) is a term for the animist framework and symbol system of Australian Aboriginal mythology, introduced by A. P. Elkin in 1938 and popularised by William Edward Hanley Stanner and others from the 1970s for a concept of "time out of time", or "everywhen", inhabited by ancestral figures, often of heroic proportions or with supernatural abilities, but not considered "gods" as they do not control the material world and are not worshipped.[1]

The term is based on a rendition of the indigenous (Arandic) word alcheringa, used by the Aranda (Arunta, Arrernte) people of Central Australia, although it appears that it is based on a misunderstanding or mistranslation, and the word has a meaning closer to "eternal, uncreated".[2] However, "Dreamtime" and "the Dreaming" has acquired its own currency in 1980s popular culture based on idealised or fictionalised conceptions of Australian mythology. Since the 1970s, "Dreaming" and "Dream time" has also returned from academic usage via popular culture and tourism, and is now ubiquitous in the English vocabulary of indigenous Australians in a kind of "self-fulfilling academic prophecy".[3] 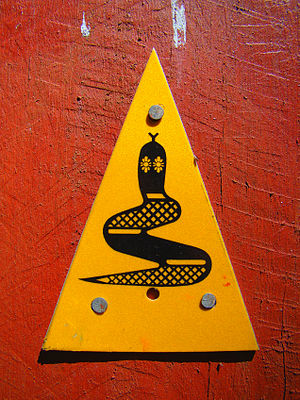 Waugals (yellow triangles with a black snake in the centre) are the official Bibbulmun Track trailmarkers between Kalamunda and Albany in Western Australia. The Noongar believe that the Waugal, or Wagyl, created the Swan River and is represented by the Darling scarp.
Main article: Australian Aboriginal mythology

The term "Dreaming" is directly based on the term Altjira (Alchera), the name of a spirit or entity in the mythology of the Aranda. Related entities are known as Mura-mura by the Dieri, and as Tjukurpa in Pitjantjatjara.

"Dreaming" is now also used as a term for a system of totemistic symbols, so that an indigenous Australian may "own" a specific "Dreaming", such as Kangaroo Dreaming, or Shark Dreaming, or Honey Ant Dreaming, or any combination of Dreamings pertinent to their country. This is because in "Dreamtime" an individual's entire ancestry exists as one, culminating in the idea that all worldly knowledge is accumulated through one's ancestors. Many Indigenous Australians also refer to the Creation time as "The Dreaming". The Dreamtime laid down the patterns of life for the Aboriginal people.[4] 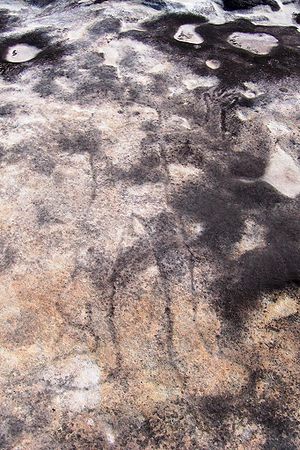 Creation is believed to be the work of culture heroes who traveled across a formless land, creating sacred sites and significant places of interest in their travels. In this way, "songlines" (or Yiri in the Warlpiri language[citation needed]) were established, some of which could travel right across Australia, through as many as six to ten different language groupings. The dreaming and travelling trails of the Spirit Beings are the songlines. The signs of the Spirit Beings may be of spiritual essence, physical remains such as petrosomatoglyphs of body impressions or footprints, among natural and elemental simulacra.

"Dreaming" existed before the life of the individual begins, and continues to exist when the life of the individual ends. Both before and after life, it is believed that this spirit-child exists in the Dreaming and is only initiated into life by being born through a mother. The spirit of the child is culturally understood to enter the developing fetus during the fifth month of pregnancy.[5] When the mother felt the child move in the womb for the first time, it was thought that this was the work of the spirit of the land in which the mother then stood. Upon birth, the child is considered to be a special custodian of that part of their country and is taught the stories and songlines of that place. As Wolf (1994: p. 14) states: "A black 'fella' may regard his totem or the place from which his spirit came as his Dreaming. He may also regard tribal law as his Dreaming."

In the Wangga genre, the songs and dances express themes related to death and regeneration.[6] They are performed publicly with the singer composing from their daily lives or while Dreaming of a nyuidj (dead spirit).[7]

Dreaming stories vary throughout Australia, with variations on the same theme. The meaning and significance of particular places and creatures is wedded to their origin in the Dreaming, and certain places have a particular potency or "dreaming".

For example, the story of how the sun was made is different in New South Wales and in Western Australia. Stories cover many themes and topics, as there are stories about creation of sacred places, land, people, animals and plants, law and custom.

In Perth, the Noongar believe that the Darling Scarp is the body of the Wagyl – a serpent being that meandered over the land creating rivers, waterways and lakes and who created the Swan River.[citation needed]

In another example, the Gagudju people of Arnhemland, for which Kakadu National Park is named, believe that the sandstone escarpment that dominates the park's landscape was created in the Dreamtime when Ginga (the crocodile-man) was badly burned during a ceremony and jumped into the water to save himself.

"Dreamtime" became a widely cited concept in popular culture in the 1980s, and by the late 1980s was adopted as a cliché in New Age and feminist spirituality alongside related appeals to other "Rouseauian natural people", such as the Native Americans idealized in 1960s hippie counterculture.[8]