From Infogalactic: the planetary knowledge core
Jump to: navigation, search
This article is about the man. For the Supreme Court case in which he was involved, see Dred Scott v. Sandford.

Dred Scott (c. 1799 – September 17, 1858) was an enslaved African American man in the United States who unsuccessfully sued for his freedom and that of his wife and their two daughters in the Dred Scott v. Sandford case of 1857, popularly known as the "Dred Scott Decision." Scott claimed that he and his wife should be granted their freedom because they had lived in Illinois and the Wisconsin Territory for four years, where slavery was illegal. The United States Supreme Court decided 7–2 against Scott, finding that neither he nor any other person of African ancestry could claim citizenship in the United States, and therefore Scott could not bring suit in federal court under diversity of citizenship rules. Moreover, Scott's temporary residence outside Missouri did not bring about his emancipation under the Missouri Compromise, which the court ruled unconstitutional as it would "improperly deprive Scott's owner of his legal property."

While Chief Justice Roger B. Taney had hoped to settle issues related to slavery and Congressional authority by this decision, it aroused public outrage, deepened sectional tensions between the northern and southern U.S. states, and hastened the eventual explosion of their differences into the American Civil War. President Abraham Lincoln's Emancipation Proclamation in 1863, and the post-Civil War Thirteenth, Fourteenth and Fifteenth amendments nullified the decision. 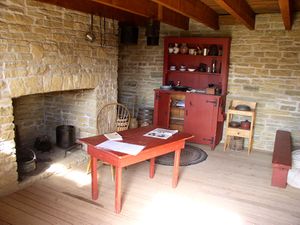 c. 1799, Dred Scott was born into slavery in Southampton County, Virginia. It is unclear if Dred had originally been named Sam or was a shortened form of Etheldred.[1] In 1818, Peter Blow and his family took their six slaves to Alabama, where the family ran an unsuccessful farm in a location near Huntsville that is now occupied by Oakwood University.[2][3][4] The Blow family gave up farming in 1830 and moved to St. Louis, Missouri, where they ran a boarding house.[5] Dred Scott was sold to John Emerson, a surgeon serving in the United States Army.

As an army officer, Dr. Emerson moved frequently, taking Dred Scott with him to each new army posting. In 1836, Emerson and Scott went to Fort Armstrong, in the free state of Illinois. In 1837, Emerson took Scott to Fort Snelling, located in what was then the free territory of Wisconsin. There, Dred Scott met and married Harriet Robinson, a slave owned by Lawrence Taliaferro. The marriage was formalized in a civil ceremony presided over by Taliaferro, who was a justice of the peace. Since slave marriages had no legal sanction, supporters of Scott would later point to this ceremony as evidence that Scott was being treated as a free man. Nevertheless, Taliaferro transferred Harriet to Emerson, who treated the Scotts as his slaves.[5]

Emerson moved to Jefferson Barracks in 1837, leaving the Scotts behind and leasing them out to other officers. In February 1838, Emerson met and married Eliza Irene Sanford at Fort Jesup in Louisiana, whereupon he sent for the Scotts to join him. While on a steamboat on the Mississippi River, between the free state of Illinois and the Iowa district of Wisconsin Territory, Harriet Scott gave birth to their first child, whom they named Eliza after their mistress. They later had a daughter, Lizzie. Eventually, they would also have two sons, but neither survived past infancy.[5][6]

The Emersons and Scotts returned to Missouri in 1840. In 1842, Emerson left the Army. After he died in the Iowa Territory in 1843, his widow Irene inherited his estate, including the Scotts. For three years after Emerson's death, she continued to lease out the Scotts as hired slaves. In 1846, Scott attempted to purchase his and his family's freedom, offered $300, about $8,000 in current value.[7] However, Irene Emerson refused, prompting Scott to resort to legal recourse.[8]

Having failed to purchase his freedom, in 1846 Scott filed legal suit in St. Louis Circuit Court. Scott stood on solid legal ground, as Missouri precedent dating back to 1824 had held that slaves freed through prolonged residence in a free state would remain free when taken back to Missouri. The doctrine was known as "Once free, always free." Scott and his wife had resided for two years in free states and free territories, and his eldest daughter had been born on the Mississippi River, between a free state and a free territory.

The Scott v. Emerson case was tried in 1847 in the federal-state courthouse in St. Louis. The verdict went against Scott, as testimony that established his ownership by Mrs. Emerson was ruled to be hearsay. However, the judge called for a retrial, which was finally held in January 1850. This time, direct evidence was introduced that Emerson owned Scott, and the jury found for Scott's freedom.

Irene Emerson appealed. In 1852, the Missouri Supreme Court struck down the lower court ruling, arguing that growing antislavery sentiment in the free states made it no longer necessary for Missouri to defer to the laws of free states.[9] In doing so, the court overturned 28 years of precedent in Missouri. Justice Hamilton R. Gamble, who was later appointed governor of the state, sharply disagreed with the majority decision and wrote a dissenting opinion.

In 1853, Scott again sued, this time under federal law. Irene Emerson had moved to Massachusetts, and Scott had been transferred to Irene Emerson's brother, John F. A. Sanford. Because Sanford was a citizen of New York, while Scott would be a citizen of Missouri if he were free, the Federal courts had diversity jurisdiction over the case.[10] After losing again in federal district court, they appealed to the United States Supreme Court in Dred Scott v. Sandford. (The name is spelled "Sandford" in the court decision due to a clerical error.)

The Court had ruled that African Americans had no claim to freedom or citizenship. Since they were not citizens, they did not possess the legal standing to bring suit in a federal court. As slaves were private property, Congress did not have the power to regulate slavery in the territories and could not revoke a slave owner's rights based on where he lived. This decision nullified the essence of the Missouri Compromise, which divided territories into jurisdictions either free or slave. Speaking for the majority, Taney ruled that because Scott was simply considered the private property of his owners, that he was subject to the Fifth Amendment to the United States Constitution, prohibiting the taking of property from its owner "without due process".

The Scott decision increased tensions between pro-slavery and anti-slavery factions in both North and South, further pushing the country towards the brink of civil war. Ultimately, the 14th Amendment to the Constitution settled the issue of Black citizenship via Section 1 of that Amendment: "All persons born or naturalized in the United States, and subject to the jurisdiction thereof, are citizens of the United States and of the State wherein they reside..." 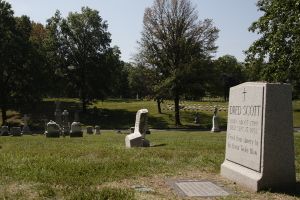 Scott's freedom suit before the state courts was backed financially by Peter Blow's children, who had turned against slavery in the decade since they sold Dred Scott. Henry Taylor Blow became a Republican Congressman after the Civil War, Charlotte Taylor Blow married the son of an abolitionist newspaper editor, and Martha Ella Blow married Charles D. Drake, who became a Republican Senator. Members of the Blow family signed as security for Scott's legal fees and secured the services of local lawyers. While the case was pending, Scott was leased out by the St. Louis County sheriff, who held the payments in escrow. In 1851, Scott was leased by Charles Edmund LaBeaume, whose sister had married into the Blow family.[5] Scott worked as a janitor at LaBeaume's law office, which was shared with Roswell Field.[12]

After the Missouri Supreme Court decision, the Blow family concluded that the case was hopeless and decided that they could no longer pay Scott's legal fees. Roswell Field agreed to represent Scott pro bono before the federal courts. Scott was represented before the U.S. Supreme Court by Montgomery Blair, an abolitionist who later joined Abraham Lincoln's cabinet as Postmaster General, and George Curtis, whose brother Benjamin sat on the Supreme Court and wrote one of the two dissents in Dred Scott v. Sandford.[5]

In 1850, Irene Emerson remarried and moved to Springfield, Massachusetts. Her new husband, Calvin C. Chaffee, was an abolitionist who was elected to the U.S. Congress in 1854. Chaffee was fiercely attacked by pro-slavery newspapers for his apparent hypocrisy in owning slaves. In response, Chaffee claimed that neither he nor Mrs. Chaffee even knew about the case until it was "noticed for trial," and wrote Montgomery Blair that "my wife ... desires to know whether she has the legal power and right to emancipate the Dred Scott family."

The strange circumstances of the Dred Scott case raised suspicions at the time of collusion to create a test case. Abolitionist newspapers charged that slaveholders colluded to name a New Yorker as defendant, while pro-slavery newspapers charged collusion on the abolitionist side.[13] It was shown a century later that John Sanford never owned Dred Scott, nor did he serve as executor of Dr. Emerson's will.[12] It was unnecessary to find a New Yorker to secure diversity jurisdiction of the federal courts, as Irene Emerson Chaffee had become a resident of Massachusetts. After the U.S. Supreme Court ruling, Roswell Field advised Dr. Chaffee that Mrs. Chaffee had full powers over Scott.[13] However, Sanford had been involved in the case since the beginning, as he'd secured a lawyer to defend Mrs. Emerson in the original state lawsuit, before she married Chaffee.[8]

Following the ruling, the Chaffees deeded the Scott family to Taylor Blow, who manumitted them on May 26, 1857. Scott worked as a porter in a St. Louis hotel. His freedom was short-lived. He died from tuberculosis in September 1858.[14] Scott was survived by his wife and his two daughters.

Scott was originally interred in Wesleyan Cemetery in St. Louis. When this cemetery was closed nine years later, Taylor Blow transferred Scott's coffin to an unmarked plot in the nearby Catholic Calvary Cemetery, St. Louis, which permitted burial of non-Catholic slaves by Catholic owners.[15] A local tradition later developed of placing Lincoln pennies on top of Scott's gravestone for good luck.[15]

Harriet Scott was buried in Greenwood Cemetery in Hillsdale, Missouri. She outlived her husband by 18 years, dying on June 17, 1876.[5]