From Infogalactic: the planetary knowledge core
(Redirected from Dregovichi)
Jump to: navigation, search 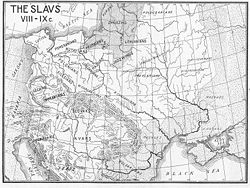 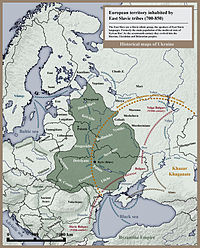 The Dregoviches (Belarusian: дрыгавічы, dryhavičy, [drɨɣavʲiˈtʂɨ]; Russian: дреговичи́, dregovichi; Ukrainian: дреговичі, drehovychi) were one of the tribal unions of Early East Slavs, and inhabited the territories down the stream of the Pripyat River and northern parts of the right bank of the Dnieper river (more exact extents of the tribe's domain are still unknown). The name of the tribe probably derives from the Old Ruthenian word дрегва or дрягва (drehva, or dryahva, which means "swamp") because the Dregovichs used to live in the marshlands.

The first known reference to Dregovichs is in the Primary Chronicle, where they are listed among the twelve tribes. However, there is a reference in the De Administrando Imperio of Constantine Porphyrogenitus to the 'Drugovichians'. Since the reference appears in a passage describing the Drugovichians as one of the Slavic peoples who pay tribute to the Kievan Rus, and they are named alongside the Severians and Krivichians, it seems likely these are the same people. By the 12th century they were assimilated into the main East Slavic peoples.

The Dregovichs left some archaeological monuments of the 9th and 10th centuries along the Pripyat, such as the remnants of agricultural settlements and kurgans with cremated bodies (unlike the kurgans of the 11th–12th centuries with intact bones). There are sepulchral structures that look like small wooden houses with span roofs.