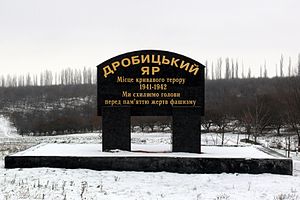 Drobytsky Yar is a ravine in Kharkiv, Ukraine. In December 1941, Nazi troops invading the Soviet Union began killing local residents over the following year. At the end of this period, some 16,000 people, mainly Jews were killed. Notably on December 15, 1941, when the temperature was −15 degrees Celsius (+5 °F), ca. 15,000 Jews were shot. Children were thrown into pits alive, to save bullets, in expectation that they would quickly freeze to death.[1]

In the beginning of the 1990s, a competition was held for the best design of the memorial to immortalize the thousands of citizens who perished from hands of the Nazis. Twenty-nine designs were submitted. The winner was the architect A. Leibfreid. The construction of the complex lasted several years however it was suspended due to the lack of funds. The memorial is located at 49°56'5.23"N 36°26'55.36"E. 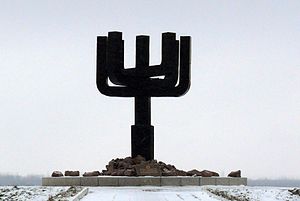 On December 13, 2002, the President of Ukraine, Leonid Kuchma, opened the memorial.

The main part of the memorial is a monument symbolizing a synagogue with the Ten Commandments between its columns; most notably: "Do not kill". The memorial begins with a monument stylized under a Jewish menorah. A road leads from a black menorah to a white main building of the complex. Thousands of Kharkiv Jews took their last steps along it in 1941/1942. These dates are found on the wall of the main arched building. Underground is a hall of memory; the wall will bear the names of the victims who are known to have died.

The territory includes two burials area. One trench is 100m long and the other is 60m. The Kharkiv archives contain data on fifteen thousand victims. However, the "Drobytsky Yar" foundation considers the number of dead to be closer to thirty thousand.

180 tons[vague] of a Zhytomyr granite was used in the construction of the memorial. This is the same material that was used for Lenin's Mausoleum. Due to the granite's particular qualities (it has reddish veins), the stones lying at the menorah's foot seem to bleed.[2]

On January 27, 2002, a new exposition in the Kharkiv City Holocaust Museum was officially opened. The exposition was created in December 2001, when Kharkiv commemorated the 60th anniversary of the Drobytsky Yar tragedy. Excursions to the ravine had already been held before, but the official opening was on January 27, the anniversary of the Auschwitz-Birkenau concentration camp's 1945 liberation (later designated International Holocaust Remembrance Day). Six candles were lit in memory of the six million Jews who died in the Holocaust.[4]