Druzhba Arena[7] was an indoor arena in Donetsk, Ukraine. It was built to develop hockey in the region. It was destroyed in May 2014.[8]

Druzhba was built in 1975,[5] by a standard design (dated 1956), with a seating capacity of 4,700 people for sporting events[2] and 5,100 for concerts[5] The Palace was open for visitors in 1976, and this event was the double surprise for fans, as the hockey match between Moscow hockey star teams was organized – Krylya Sovetov and Dynamo.[2]

Many memorable matches took place on the ice arena, for example, international youth tournament between teams from socialist countries (1976), international tournament for the prize of the newspaper Sovetsky Sport (1983) etc.

After the Palace of Sports was open, a hockey school for children was functioning on its base for 16 years. More than 500 children were taught in the school. Cooling units had worked without overhaul repair until the 1990s, and it became difficult to meet the requirements stipulated in the competitions conducted here and in 1992, the Palace was closed.

The Palace was reconstructed in 2010, during the renovation facade of the building was updated, the facility was equipped with modern freezing system, the stands capacity was increased to 4,000 spectators from 3,500.[4] Donetsk obtained the right to host the 2011 IIHF World U18 Championship Division II. In 2013, it hosted the Final stage of the 2012–13 IIHF Continental Cup and the 2013 IIHF World Championship Division I.

Now it is the regular home venue of BC Donetsk (basketball team) and HC Donbass (ice hockey team).[6] The arena hosts the annual Pole Vault Stars meeting, which is hosted by Sergey Bubka and has featured numerous world record performances.[9] 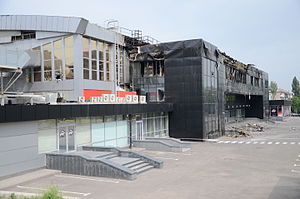 Damage to the ice rink after the fire

On the night of May 26, 2014, Druzhba Arena was ransacked by armed men in the Donetsk People's Republic as part of the ongoing wave of violence in Ukraine.[10] The men looted the arena, stealing televisions, safety deposit boxes, equipment and a company car before destroying surveillance equipment – after which they set the arena on fire. The team's statement was issued to the public, saying “We call on those people who still sympathize with the rebels of the so-called Donetsk People’s Republic, terrorizing East Ukraine – think: Is this a “future” they want for themselves and their children?"[11] HC Donbass expects the arena to be operational within 90 days and fully restored by the start of the KHL season,[12] which do not happened.