From Infogalactic: the planetary knowledge core
Jump to: navigation, search
This article is about counties in the U.S. that prohibit alcoholic beverage sales. For the Bon Jovi song, see Dry County (song). For the song by The B-52's, see Cosmic Thing. 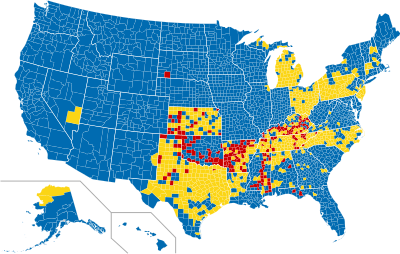 A dry county is a county in the United States whose government forbids the sale of any kind of alcoholic beverages. Some prohibit off-premises sale, some prohibit on-premises sale, and some prohibit both. Hundreds of dry counties exist across the United States, a majority of them in the South. A number of smaller jurisdictions also exist, such as cities, towns, and townships, which prohibit the sale of alcoholic beverages. These are known as dry cities, dry towns, or dry townships.

Although the Twenty-First Amendment repeals nationwide prohibition in the United States, it allows for prohibition under state or local laws. Prior to and after repeal of nationwide prohibition, some states passed local option laws granting counties and municipalities, either by popular vote or ordinance, the ability to decide for themselves whether to allow alcoholic beverages within their jurisdiction.

Since the Twenty-first Amendment repealed nationwide prohibition in the United States, alcohol prohibition legislation has been left to the discretion of each state, but that authority is not absolute. States within the United States and other sovereign territories were once assumed to have the authority to regulate commerce with respect to alcohol traveling to, from, or through their jurisdictions. However, one state's ban on alcohol may not impede interstate commerce between states that permit it. The Supreme Court of the United States held in Granholm v. Heald [1] that states do not have the power to regulate interstate shipments of alcoholic beverages. Therefore, it may be likely that municipal, county, or state legislation banning possession of alcoholic beverages by passengers of vehicles operating in interstate commerce (such as trains and interstate bus lines) would be unconstitutional if passengers on such vehicles were simply passing through the area. For example, the Navajo Nation has long forbidden alcohol. Even prior to Amtrak, when the Santa Fe Railway's Super Chief passed through, the bar closed for the duration of the transit, but the alcohol stayed on board.

A 2004 survey by the National Alcohol Beverage Control Association found that more than 500 municipalities in the United States are dry, including 83 in Alaska. Thirty-six of the 82 counties in Mississippi are dry or partially dry.[2] In Florida, three of its 67 counties are dry,[3] all of which are located in the northern part of the state, an area that has cultural ties to the Deep South. The last dry city in Washington State, Fircrest, will vote on whether to allow sales of alcohol on 3 November 2015.[4]

Although Moore County, Tennessee is the home county of Jack Daniel's, a major operational distillery of whiskey,[5] it is a dry county, so the product is not available at stores or restaurants within the county; however, the distillery does sell commemorative bottles of whiskey on site.

A study in Kentucky suggested that residents of dry counties have to drive farther from their homes to consume alcohol, thus increasing impaired driving exposure,[6] although it found that a similar proportion of crashes in wet and dry counties are alcohol-related. A study of Arkansas noted that wet and dry counties are often adjacent and that alcohol beverage sales outlets are often located immediately across county or even on state lines.[7] Other researchers have pointed to the same phenomenon. Winn and Giacopassi observed that residents of wet counties most likely have "shorter distances (to travel) between home and drinking establishments."[8] From their study, Schulte and colleagues postulate that "it may be counter productive in that individuals are driving farther under the influence of alcohol, thus, increasing their exposure to crashes in dry counties."[9] Data collected by the National Center for Statistics and Analysis (NCSA) also support the claim of higher rates of DUI accidents in dry counties, "dry counties had a fatality rate in drunk driving accidents of 6.8 per 10,000 people. Conversely, wet counties had 1.9 per 10,000 people."[10] Another issue a dry city or county may face is the loss of tax revenue because drinkers are willing to drive across city, county or even state lines to obtain alcohol. Counties in Texas have experienced this problem, which led to some of its residents to vote towards going wet to see their towns come back to life commercially. Although the idea of bringing more revenue and possibly new jobs to a town may be appealing from an economic standpoint, religious opposition is still present.[11]

During the eight-year run of The Andy Griffith Show and the subsequent three-year run of Mayberry R.F.D., the fictional Mayberry County, North Carolina, where Mayberry was located, was established to have been a dry county. A running gag on the show portrayed the Otis Campbell character as constantly ending up in jail due to his drunkenness. Otis was drunk so often, he would let himself into his regular jail cell using a key stored within reach of the jail's two comfortable cells and sleep off the effects of alcohol. (Hal Smith, the actor who portrayed Otis, was a teetotaler in real life.) Many plots would also involve out-of-town criminals committing alcohol-related crimes, such as running moonshine in Mayberry. In reality the only county in North Carolina that is completely dry is Graham County, which sits on the Tennessee border.[12]