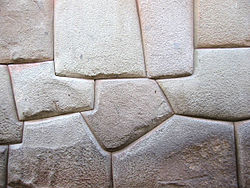 Dry stone (also called drystack) is a building method by which structures are constructed from stones without any mortar to bind them together. Dry stone structures are stable because of their unique construction method, which is characterized by the presence of a load-bearing façade of carefully selected interlocking stones. Dry stone technology is best known in the context of wall construction, but dry stone artwork, buildings, bridges, and other structures also exist.

A dry stone wall, also known as a dry stone dyke, drystane dyke, dry stone hedge, rock fence or stone fence, is a wall constructed from stones without mortar to bind them together.[1] As with any dry stone construction, the structural integrity arises from compressional forces and the interlocking of the stones. Such walls have been traditionally used in building construction as field boundaries and garden or churchyard walls, and on steep slopes as retaining walls for terracing.

Terminology varies regionally. When used as field boundaries, dry stone structures often are known as dykes, particularly in Scotland. Dry stone walls are characteristic of upland areas of Britain and Ireland where rock outcrops naturally or large stones exist in quantity in the soil. They are especially abundant in the West of Ireland, particularly Connemara. They may also be found throughout the Mediterranean, including retaining walls used for terracing. Such constructions are common where large stones are plentiful (for example, in The Burren) or conditions are too harsh for hedges capable of retaining livestock to be grown as reliable field boundaries. Many thousands of miles of such walls exist, most of them centuries old.

In the United States they are common in areas with rocky soils, such as New England, New York, New Jersey, and Pennsylvania and are a notable characteristic of the bluegrass region of central Kentucky as well as Virginia, where they are usually referred to as rock fences or stone fences, and the Napa Valley in north central California. The technique of construction was brought to America primarily by English and Scots-Irish immigrants. The technique was also taken to Australia (principally western Victoria and some parts of Tasmania and New South Wales) and New Zealand (especially Otago). 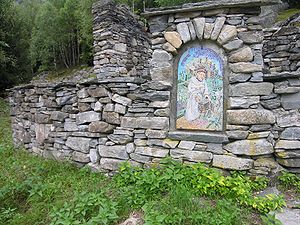 Mosaic embedded in a dry stone wall in Italian Switzerland

Similar walls also are found in the Swiss-Italian border region, where they are often used to enclose the open space under large natural boulders or outcrops.

The higher-lying rock-rich fields and pastures in Bohemia's South-Western border range of Šumava (e.g. around the mountain river of Vydra) are often lined by dry stone walls built of field-stones removed from the arable or cultural land. They serve both as cattle/sheep fences and the lot's borders. Sometimes also the dry stone terracing is apparent, often combined with parts of stone masonry (house foundations and shed walls) that are held together by a clay-cum-needles[definition needed] "composite" mortar.[further explanation needed][clarification needed]

Great Zimbabwe is a ruined city in the south-eastern hills of Zimbabwe, near Lake Mutirikwe and the town of Masvingo. It was the capital of the Kingdom of Zimbabwe during the country's Late Iron Age. Construction on the monument began in the 11th century and continued until the 15th century. The exact identity of the Great Zimbabwe builders is at present unknown, and various theories have been proposed as to who these masons may have been. The stone city spans an area of 722 hectares (1,780 acres) which, at its peak, could have housed up to 18,000 people. It is recognised as a World Heritage Site by UNESCO.

In Peru in the 15th century AD, the Inca made use of otherwise unusable slopes by building dry stone walls to create terraces. They also employed this mode of construction for freestanding walls. Their ashlar type construction in Machu Picchu uses the classic Inca architectural style of polished dry-stone walls of regular shape. The Incas were masters of this technique, in which blocks of stone are cut to fit together tightly without mortar. Many junctions are so perfect that not even a knife fits between the stones. The structures have persisted in the high earthquake region because of the flexibility of the walls and that in their double wall architecture, the two portions of the walls incline into each other. 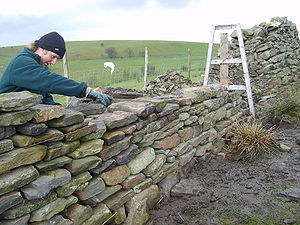 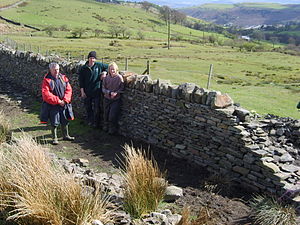 There are several methods of constructing dry stone walls, depending on the quantity and type of stones available. Most older walls are constructed from stones and boulders cleared from the fields during preparation for agriculture [2] (field stones) but many also from stone quarried nearby. For modern walls, quarried stone is almost always used. The type of wall built will depend on the nature of the stones available.

One type of wall is called a "double" wall and is constructed by placing two rows of stones along the boundary to be walled. The foundation stones are ideally set into the ground so as to rest firmly on the subsoil. The rows are composed of large flattish stones, diminishing in size as the wall rises. Smaller stones may be used as chocks in areas where the natural stone shape is more rounded. The walls are built up to the desired height layer-by-layer (course by course), and at intervals, large tie-stones or through stones are placed which span both faces of the wall and sometimes project. These have the effect of bonding what would otherwise be two thin walls leaning against each other, greatly increasing the strength of the wall. Diminishing the width of the wall as it gets higher, as traditionally done in Britain, also strengthens the wall considerably. The voids between the facing stones are carefully packed with smaller stones (filling, hearting).

In addition to gates a wall may contain smaller purposely built gaps for the passage or control of wildlife and livestock such as sheep. The smaller holes usually no more than 8  inches in height are called 'Bolt Holes' or 'Smoots'. Larger ones may be between eighteen and 24  inches in height, these are called a 'Cripple Hole'.[3]

Boulder walls are a type of single wall in which the wall consists primarily of large boulders, around which smaller stones are placed. Single walls work best with large, flatter stones. Ideally, the largest stones are being placed at the bottom and the whole wall tapers toward the top. Sometimes a row of capstones completes the top of a wall, with the long rectangular side of each capstone perpendicular to the wall alignment. 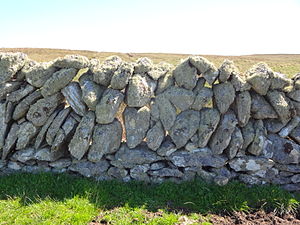 Another variation is the "Cornish hedge" or Welsh clawdd, which is a stone-clad earth bank topped by turf, scrub, or trees and characterised by a strict inward-curved batter (the slope of the "hedge"). As with many other varieties of wall, the height is the same as the width of the base, and the top is half the base width.

Different regions have made minor modifications to the general method of construction — sometimes because of limitations of building material available, but also to create a look that is distinctive for that area. Whichever method is used to build a dry stone wall, considerable skill is required. Correcting any mistakes invariably means dissembling down to the level of the error. Selection of the correct stone for every position in the wall makes an enormous difference to the lifetime of the finished product, and a skilled waller will take time making the selection.

As with many older crafts, skilled wallers, today, are few in number. With the advent of modern wire fencing, fields can be fenced with much less time and expense using wire than using stone walls; however, the initial expense of building dykes is offset by their sturdiness and consequent long, low-maintenance lifetimes. As a result of the increasing appreciation of the landscape and heritage value of dry stone walls, wallers remain in demand, as do the walls themselves. A nationally recognised certification scheme is operated in the UK by the Dry Stone Walling Association, with four grades from Initial to Master Craftsman. 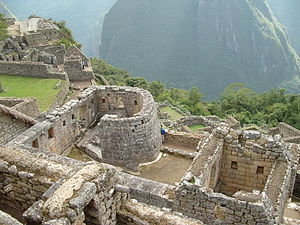 While the dry-stone technique is generally used for field enclosures, it also was used for buildings. The traditional turf-roofed Highland blackhouse was constructed using the double wall dry stone method. When buildings are constructed using this method, the middle of the wall is generally filled with earth or sand in order to eliminate draughts. During the Iron Age, and perhaps earlier, the technique also was used to build fortifications such as the walls of Eketorp Castle (Öland, Sweden), Maiden Castle, North Yorkshire, Reeth, Dunlough Castle in southwest Ireland and the rampart of the Long Scar Dyke. Many of the dry-stone walls that exist today in Scotland can be dated to the 14th century or earlier when they were built to divide fields and retain livestock. Some extremely well built examples are found on the lands of Muchalls Castle.

Since at least the Middle Ages some bridges capable of carrying horse or carriage traffic have been constructed using drystone techniques. An example of a well-preserved bridge of this type is a double arched limestone bridge in Alby, Sweden on the island of Öland, (shown at right).

In northeastern Somalia, on the coastal plain 20 km to Aluula's east are found ruins of an ancient monument in a platform style. The structure is formed by a rectangular dry stone wall that is low in height; the space in between is filled with rubble and manually covered with small stones. Relatively large standing stones are also positioned on the edifice's corners. Near the platform are graves, which are outlined in stones. 24 m by 17 m in dimension, the structure is the largest of a string of ancient platform and enclosed platform monuments exclusive to far northeastern Somalia.[4] Burial sites near Burao in the northwestern part of the country likewise feature a number of old stelae.[5] 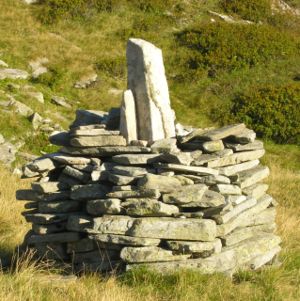 In the UK and Switzerland, it is possible to find dry stone constructions without any obvious function. The largest and oldest of them, such as Stonehenge, are likely related to ancient pagan rituals. However, the smaller structures may be built just as signs, marking the mountain paths or boundaries of owned land. (Some stand on the boundary between Italy and Switzerland; see photo). In many countries, cairns are used as road and mountain top markers. 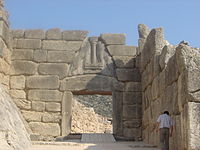 The Lion Gate of the Mycenae acropolis is dry stone

Some dry-stone wall constructions in north-west Europe have been dated back to the Neolithic Age. Some Cornish hedges are believed by the Guild of Cornish Hedgers to date from 5000 BCE,[6] although there appears to be little dating evidence. In County Mayo, Ireland, an entire field system made from dry-stone walls, since covered in peat, have been carbon-dated to 3800 BCE. The cyclopean walls of the acropolis of Mycenae have been dated to 1350 BCE and those of Tiryns slightly earlier. In Belize, the Mayan ruins at Lubaantun illustrate use of dry stone construction in architecture of the 8th and 9th century CE.