listen); born 27 September 1952) is the first and only Romanian cosmonaut who flew in space. He flew aboard a Soyuz 40 and is now retired.

Born on 27 September 1952 in Braşov, Romania, Prunariu graduated from the Physics and Mathematics high school in Braşov in 1971 and from the University POLITEHNICA of Bucharest in 1976, obtaining a degree in Aerospace Engineering.

Prunariu worked as a Diploma Engineer at "Industria Aeronautică Română IAR- Braşov", an aircraft industry facility, prior to enrolling in the Romanian Air Force Officers Training School in 1977.

He was selected for spaceflight training in 1978 as a part of the Intercosmos Program. Obtaining the maximum marks during three years of preparation he was selected for a joint space flight with the Russian cosmonaut Leonid Popov. In May 1981 they completed an eight-day space mission on board Soyuz 40 and the Salyut 6 space laboratory where they completed scientific experiments in the fields of astrophysics, space radiation, space technology, space medicine and biology. Prunariu became the 103rd human being to fly into the Outer Space.

In 1981, after completing the flight, he received the awards of Hero of the Socialist Republic of Romania and Hero of the Soviet Union (22 May 1981) and the medal "Golden Star". He was also awarded the Order of Lenin. 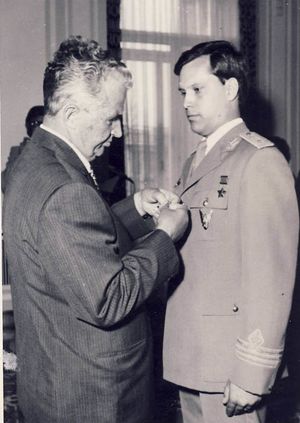 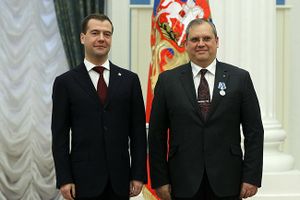 Prunariu was awarded the Medal for Merits in Space Exploration by Russian President Dmitry Medvedev at the Moscow Kremlin on 12 April 2011.

Prunariu is a member of the International Academy of Astronautics (1992 – corresponding member, 2008 – full member) and a member of the Romanian National COSPAR Committee (1994). In 1984 he was awarded the "Hermann Oberth Gold Medal" by the German Rocket Society "Hermann Oberth – Wernher von Braun". In 1985 he joined the Association of Space Explorers (ASE), which currently (2012) comprises over 350 flown individuals from 35 countries. From 1993 until 2004 he was the permanent representative of the Association of Space Explorers at the United Nations Committee on the Peaceful Uses of Outer Space (COPUOS) sessions. Since 1996 Prunariu has been a member of the Executive Committee of ASE for two terms of three years. Since 1992 he has represented the Government of Romania to the UN COPUOS sessions.

Since 1995 Prunariu is the Vice-President of the International Institute for Risk, Security and Communication Management (EURISC), Bucharest.

From 1998 to 2004 Prunariu was the President of the Romanian Space Agency, and from 2000 an Associate Professor on Geopolitics within the Faculty of International Business and Economics, Academy of Economic Studies, Bucharest, Romania. In 2004 he was elected as the Chairman of the Scientific and Technical Subcommittee of the UN COPUOS for a two years term. On 1 December 2000, he was awarded the highest state order of Romania, Star of Romania in rank of a Grand Officer.

From May 2004 until August 2005 Prunariu was the itinerary Ambassador Extraordinary and Plenipotentiary of Romania to the Russian Federation.

In February 2007 he completely retired from the Ministry of Defense with the rank of a Major-General, continuing to work on the same positions as a civilian servant. Until September 2008 he accomplished the duties of the Director of the Romanian Office for Science and Technology to the European Union (ROST) in Brussels. Currently, Prunariu is working for the Romanian Space Agency as an expert within the Airspace Consulting Association. He was elected as Chairman of the UN Committee on the Peaceful Uses of Outer Space (COPUOS) for the period of June 2010 – June 2012. In addition to that, at the 23rd Congress of the Association of Space Explorers that took place in Kuala Lumpur, Malaysia, in the period of 5–10 October 2010, D. Prunariu was elected the President of the new organized Chapter of the association, ASE Europe. In appreciation of his activity within the Association of Space Explorers and his active involvement, at the 24th Congress of ASE which took place in September 2011, in Moscow, D. Prunariu was elected the President of the whole ASE, with a mandate of 3 years. In November 2011 Prunariu became a Honorary Member of the Romanian Academy. In September 2012 Prunariu received the "Social Sciences Award" of the International Academy of Astronautics for significant and lasting contributions to the advancement of the astronautical sciences. As a consequence of his professionalism, experience and correctness, in October 2012 Prunariu was appointed and accomplished the job as chairman of the Nominations Committee for the International Astronautic Federations' officers and president for the period 2012 – 2014.

Prunariu is a co-author of several books regarding space technology and space flight and has presented/published numerous scientific papers. His PhD thesis produced new developments in the field of space flight dynamics. In May 2012 an updated biography of Dumitru-Dorin Prunariu was published by "Adevarul" publishing house from Bucharest.

Prunariu is married to Crina Prunariu and has two sons and two grandchildren.