Dushanbe (Tajik: Душанбе) (Persian: دوشنبه) is the capital and largest city of Tajikistan. Dushanbe means "Monday" in the Tajik language.[2] It was so named because it grew from a village that originally had a popular market on Mondays. Until 1929, the city was known in Russian as Dyushambe (Russian: Дюшамбе), and from 1929 to 1961 as Stalinabad (Tajik: Сталинобод). As of 2014, Dushanbe has a population of 778,500.

Situated at the confluence of two rivers, Varzob and Kofarnihon, Dushanbe is the capital of Tajikistan. Although archaeological remnants dating to the 5th century BC have been discovered in the area, there is little to suggest that Dushanbe was more than a small village until the early 20th century.

The first written mention of the village Dushanbe found at the end of 1676. It was at the crossroads, where a large bazaar occurred on Mondays, hence the name Dushanbe-Bazar (Tajik: Душанбе-бозор دوشنبه بازار‎ Duşanbe-bozor),[3] from Dushanbe, which means "Monday" in Tajik. In the village, there were more than 500 households and a population of about 8,000 people. 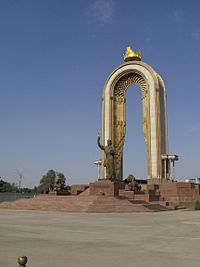 By 1826, the town was called Dushanbe-Kurgan (Tajik: Душанбе-қурғон دوشنبه قورغان‎ Duşanbe-qurƣon, with the suffix qurƣon from Turkic qurğan, meaning "fortress") Russified as Dyushambe (Дюшамбе). The first map showing Dyushambe was drafted in 1875. At that time, the town was a fortress on a steep bank on the left bank of the Varzob River with 10,000 residents.

In 1920, the last Emir of Bukhara briefly took refuge in Dyushambe after being overthrown by the Bolshevik revolution. He fled to Afghanistan after the Red Army conquered the area the next year.[citation needed] At the beginning of 1922, the town was taken by Basmachi troops led Enver Pasha, but on 14 July 1922 again came under the power of the Bolsheviks and was proclaimed the capital of the Tajik Autonomous Soviet Socialist Republic as a part of the Uzbek Soviet Socialist Republic in 1924.

A Tajik Soviet Socialist Republic separate from the Uzbek SSR was created in 1929, and its capital Dyumshambe was renamed Stalinabad (Russian: Сталинабад; Tajik: Сталинобод ستالینآباد‎ Stalinobod) for Soviet dictator Joseph Stalin on 16 October 1929. In the years that followed, the city developed at a rapid pace.[4]

The Soviets transformed the area into a centre for cotton and silk production, and tens of thousands of people relocated to the city. The population also increased with thousands of Tajiks migrating to Tajikistan following the transfer of Bukhara and Samarkand to the Uzbek SSR as part of national delimitation in Central Asia.[5]

On 10 November 1961, Stalinabad was renamed Dushanbe, the name it retains to this day.

Severe rioting occurred in February 1990, after it was rumored that the Soviet government planned to relocate tens of thousands of Armenian refugees to Tajikistan. The Dushanbe riots were primarily fueled by concerns about housing shortages for the Tajik population, but they coincided with a wave of nationalist unrest that swept Transcaucasia and other Central Asian states during the twilight of Gorbachev's era.[6]

Dushanbe features a Mediterranean climate (Köppen: Csa),[7] with some continental climate influences (Köppen: Dsa).[7] The summers are hot and dry and the winters are chilly, but not very cold. The climate is damper than other Central Asian capitals, with an average annual rainfall over 500 millimetres (20 in) as moist air is funnelled by the surrounding valley during the winter and spring. Winters are not as cold as further north owing to the shielding of the city by mountains from extremely cold air from Siberia. January 2008 was particularly cold, and the temperature dropped to −22 °C (−8 °F).[8] 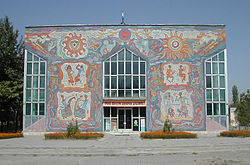 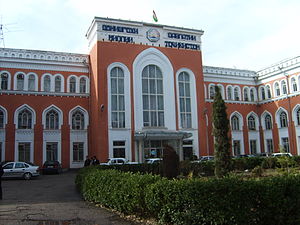 A number of educational facilities are based in Dushanbe:

The city is served by Dushanbe International Airport which as of April 2015, had regularly scheduled flights to major cities in Russia, Central Asia, as well as Delhi, Dubai, Frankfurt, Istanbul, Kabul, Tehran, and Ürümqi amongst others. Tajikistan's principal railways are in the southern region and connect Dushanbe with the industrial areas of the Gissar and Vakhsh valleys and with Uzbekistan, Turkmenistan, Kazakhstan and Russia.[14]

The Dushanbe trolleybus system operates public buses in the city. Automobiles are the main form of transportation in the country and as of 2014 many highway and tunnel construction projects are underway or have recently been completed. Major projects include rehabilitation of the Dushanbe – Chanak (Uzbek border), Dushanbe – Kulma (Chinese border), Kurgan-Tube – Nizhny Pyanj (Afghan border) highways and construction of tunnels under the mountain passes of Anzob, Shakhristan, Shar-Shar[15] and Chormazak.[16]

The population of Dushanbe: 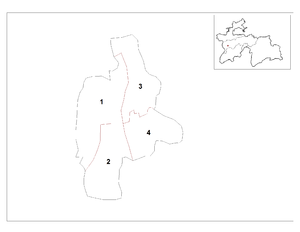 Dushanbe is divided into the following districts:[citation needed] 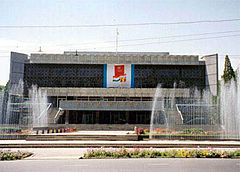 Dushanbe is twinned with:[4]