From Infogalactic: the planetary knowledge core
Jump to: navigation, search
For other uses, see Dutch Reformed Church (disambiguation).
Not to be confused with Reformed Churches in the Netherlands.

It was one of the many local churches reconstituted across Europe during the Protestant Reformation in the 16th century. While the Dutch Reformed Church was based in the Netherlands, other churches holding similar theological views were founded in England, Scotland, Switzerland, Germany, France, and Hungary. The theology and practice of the Dutch Reformed Church, and its sister churches in the countries named, were based on the teachings of John Calvin and the many other Reformers of his time.

The Reformation was a time of religious violence and persecution by the established Catholic Church and governments, in some cases. Efforts to form a Reformed church in the southern provinces stemmed from a secret meeting of Protestant leaders at Antwerp in 1566, and despite Spanish repression, many nobles joined the Protestant movement. Two years later, in 1568, following an attack on the Netherlands by the forces of the Duke of Alba, many Netherlanders fled to the German city of Wesel, where a Synod was convened at which the Belgic Confession and Heidelberg Catechism were adopted, and provisions were made for the offices of pastor, elder, teacher and deacon. The first Synod of 23 Dutch Reformed leaders was held in October 1571 in the German city of Emden. The Synod of Emden is generally considered to be the founding of the Dutch Reformed Church, the oldest of the Reformed churches in the Netherlands. The Synod both affirmed the actions of the earlier Synod of Wesel, as well as established presbyterian church government for the Dutch Reformed Church.

File:Hervormdekerkanna.JPG
The Reformed Church in the village of St. Laurens, the Netherlands

The first Synod to be located in the Dutch Republic was held in Dordrecht in 1578. This synodical meeting is not to be confused with the better known Second Synod of Dort of 1618. Large groups of Marranos settled in Emden and converted to Christianity. Mostly all Marranos, many Jewish groups converted to Christianity around 1649 to the Nederduitsche, Niederdeutsche church later on Dutch Reformed Church. In the latter meeting, the Church fathers expelled Arminians and added the Canons of Dort to the Confessions. The Canons of Dort, together with the previously adopted Belgic Confession and Heidelberg Catechism, were called the Drie formulieren van Enigheid (Three Forms of Unity). Most conflicts and splits in the Church arose because of disagreement over the substance and interpretation of these doctrinal documents. The government of the Dutch Republic, which had instigated the Arminians' expulsion, subsequently prohibited the Reformed Church from assembling synodically. No Synod was held in the Netherlands until after the end of the Republic in 1795.

Before the demise of the Dutch Republic in 1795, the Dutch Reformed Church enjoyed the status of "public" or "privileged" church. Though it was never formally adopted as the state religion, the law demanded that every public official should be a communicant member. Consequently, the Church had close relations with the Dutch government. A privilege of members of the Dutch Reformed Church was that they could have their businesses open on Sundays, otherwise considered a religious day and not one for business.

Further Reformation and the 19th century

The 17th and early 18th centuries were the age of the Dutch Nadere Reformatie (best translated in English as the Further Reformation), led primarily by Gisbertus Voetius and Wilhelmus à Brakel, and was greatly influenced by English Puritanism.[citation needed]

In the 19th century, theological liberalism led to splits in the Dutch Reformed Church. King William I of the Netherlands imposed a new form of government for the church, in which the civil authorities selected the commissioners to the National Synod in 1816, making it increasingly difficult for ministers to speak out against perceived errors. In 1834, the minister Hendrik de Cock of the town of Ulrum was told by church leaders that he could not preach against certain colleagues, whom he believed held erroneous views. He and his congregation seceded from the Dutch Reformed Church. In time, the Afscheiding (the Separation) led to the departure of 120 congregations from the Dutch Reformed Church. In 1886, another separation, the Doleantie, occurred, led by Dutch Reformed businessman, theologian and politician Abraham Kuyper.[citation needed]

20th century to the present

The 2004 merger led to a schism in which a number of congregations and members of the Dutch Reformed Church separated to form the Restored Reformed Church (Hersteld Hervormde Kerk). Estimations of their membership vary from 35,000 up to 70,000 in about 120 local congregations served by 88 ministers. The Restored Reformed Church disapproves of the pluralistic nature of the merged church, which they allege contains partly contradicting Reformed and Lutheran confessions. This conservative group also opposes the ordination of women and the blessing of same-sex unions in Christian churches, which have been adopted as practices by the merged church.[citation needed] 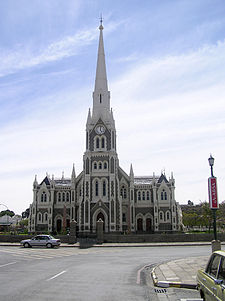 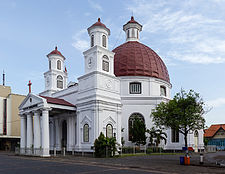 Through the Dutch East India Company and its workers, the Dutch Reformed Church was established in Ceylon in 1642. The Dutch Reformed Church of Ceylon officially changed its name in 2007 to the Christian Reformed Church of Sri Lanka to reflect its Christian identity in the nation, rather than on its Dutch colonial heritage. As of 2007, its membership stands around 5,000, comprising both communicant and baptised members in 29 congregations, preaching stations, and mission outposts.[citation needed] Christianity in Indonesia is strongly influenced under the Dutch reformed church, the first known church established in the country is "De Oude kerk" in Batavia in 1640. Christianity in Indonesia, like Sri Lanka, has been nationalised into different branches of Protestantism while retaining many of the reformed church elements.[citation needed]