For history and links to the earlier history of each of the provinces, see Seventeen Provinces. For the southern provinces that did not secede from Habsburg control in 1581, see Spanish Netherlands.

Until the 16th century, the Low Countries – corresponding roughly to the present-day Netherlands, Belgium, and Luxembourg – consisted of a number of duchies, counties, and Prince-bishoprics, almost all of which were under the supremacy of the Holy Roman Empire, with the exception of the county of Flanders, which was under the Kingdom of France.

Most of the Low Countries had come under the rule of the House of Burgundy and subsequently the House of Habsburg. In 1549 Holy Roman Emperor Charles V issued the Pragmatic Sanction, which further unified the Seventeen Provinces under his rule. Charles was succeeded by his son, King Philip II of Spain. In 1568 the Netherlands, led by William I of Orange, revolted against Philip II because of high taxes, persecution of Protestants by the government, and Philip's efforts to modernize and centralize the devolved-medieval government structures of the provinces.[15] This was the start of the Eighty Years' War.

In 1579 a number of the northern provinces of the Low Countries signed the Union of Utrecht, in which they promised to support each other in their defence against the Spanish army. This was followed in 1581 by the Act of Abjuration, the declaration of independence of the provinces from Philip II.

In 1582 the United Provinces invited Francis, Duke of Anjou to lead them; but after a failed attempt to take Antwerp in 1583, the duke left the Netherlands again. After the assassination of William of Orange (10 July 1584), both Henry III of France and Elizabeth I of England declined the offer of sovereignty. However, the latter agreed to turn the United Provinces into a protectorate of England (Treaty of Nonsuch, 1585), and sent the Earl of Leicester as governor-general. This was unsuccessful and in 1588 the provinces became a confederacy. The Union of Utrecht is regarded as the foundation of the Republic of the Seven United Provinces, which was not recognized by the Spanish Empire until the Peace of Westphalia in 1648.

The Republic of the United Provinces lasted until a series of republican revolutions in 1783–1795 created the Batavian Republic. During this period, republican forces took several major cities of the Netherlands. After initially fleeing, the monarchist forces came back with British, Austrian, and Prussian troops and retook the Netherlands. The republican forces fled to France, but then successfully re-invaded alongside the army of the French republic. After the French Republic became the French Empire under Napoleon, the Batavian Republic was replaced by the Napoleonic Kingdom of Holland. 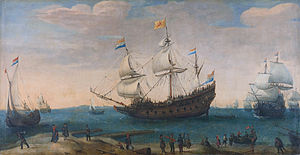 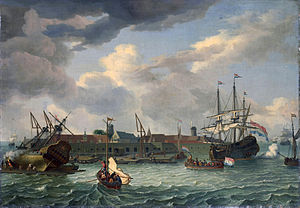 During the Dutch Golden Age in the late 16th century onward, the Dutch Republic dominated world trade in the 17th century, conquering a vast colonial empire and operating the largest fleet of merchantmen of any nation. The County of Holland was the wealthiest and most urbanized region in the world. 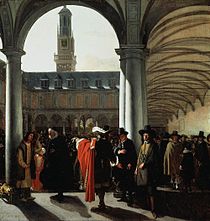 Courtyard of the Amsterdam Stock Exchange, 1653

The free trade spirit of the time received a strong augmentation through the development of a modern, effective stock market in the Low Countries.[16] The Netherlands has the oldest stock exchange in the world, founded in 1602 by the Dutch East India Company. While Rotterdam has the oldest bourse in the Netherlands, the world's first stock exchange – that of the Dutch East-India Company – went public in six different cities. Later, a court ruled that the company had to reside legally in a single city, so Amsterdam is recognized as the oldest such institution based on modern trading principles. While the banking system evolved in the Low Countries, it was quickly incorporated by the well-connected English, stimulating English economic output.

Between 1590–1712 the Dutch also possessed one of the strongest and fastest navies in the world, allowing for their varied conquests including breaking the Portuguese sphere of influence on the Indian Ocean and in the Orient, as well as a lucrative slave trade from Africa and the Pacific.

Main article: Politics and Government of the Netherlands (1581–1795)

The republic was a confederation of seven provinces, which had their own governments and were very independent, and a number of so-called Generality Lands. The latter were governed directly by the States General (Staten-Generaal in Dutch), the federal government. The States General were seated in The Hague and consisted of representatives of each of the seven provinces. The provinces of the republic were, in official feudal order:

In fact, there was an eighth province, the County of Drenthe, but this area was so poor it was exempt from paying federal taxes and as a consequence was denied representation in the States General. Each province was governed by the Provincial States, the main executive official (though not the official head of state) was a raadspensionaris. In times of war, the stadtholder, who commanded the army, would have more power than the raadspensionaris.

In theory, the stadtholders were freely appointed by and subordinate to the states of each province. However, in practice the princes of Orange of the House of Orange-Nassau, beginning with William the Silent, were always chosen as stadtholders of most of the provinces. Zeeland and usually Utrecht had the same stadtholder as Holland.

After the Peace of Westphalia, several border territories were assigned to the United Provinces. They were federally-governed Generality Lands (Generaliteitslanden). They were Staats-Brabant (present North Brabant), Staats-Vlaanderen (present Zeeuws-Vlaanderen), Staats-Limburg (around Maastricht) and Staats-Oppergelre (around Venlo, after 1715).

The States General of the United Provinces were in control of the Dutch East India Company (VOC) and the Dutch West India Company (WIC), but some shipping expeditions were initiated by some of the provinces, mostly Holland and/or Zeeland.

The framers of the US Constitution were influenced by the Constitution of the Republic of the United Provinces, as Federalist No. 20, by James Madison, shows.[17] Such influence appears, however, to have been of a negative nature, as Madison describes the Dutch confederacy as exhibiting "Imbecility in the government; discord among the provinces; foreign influence and indignities; a precarious existence in peace, and peculiar calamities from war." Apart from this, the American Declaration of Independence is similar to the Act of Abjuration, essentially the declaration of independence of the United Provinces,[18] but concrete evidence that the former directly influenced the latter is absent. 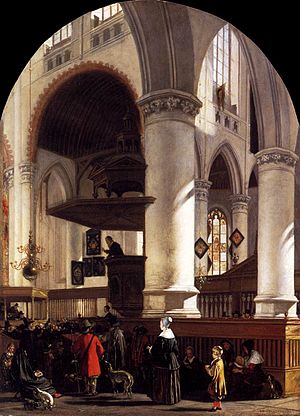 Interior of the Oude Kerk at Delft during a Sermon, 1651

In the Union of Utrecht of 20 January 1579, Holland and Zeeland were granted the right to accept only one religion (in practice, Calvinism). Every other province had the freedom to regulate the religious question as it wished, although the Union stated every person should be free in the choice of personal religion and that no person should be prosecuted based on religious choice.[19] William of Orange had been a strong supporter of public and personal freedom of religion and hoped to unite Protestants and Catholics in the new union, and, for him, the Union was a defeat. In practice, Catholic services in all provinces were quickly forbidden, and the Reformed Church became the "public" or "privileged" church in the Republic.[20]

During the Republic, any person who wished to hold public office had to conform to the Reformed Church and take an oath to this effect. The extent to which different religions or denominations were persecuted depended much on the time period and regional or city leaders. In the beginning, this was especially focused on Roman Catholics, being the religion of the enemy. In 17th-century Leiden, for instance, people opening their homes to services could be fined 200 guilders (a year's wage for a skilled tradesman) and banned from the city.[21] Throughout this, however, personal freedom of religion existed and was one factor – along with economic reasons – in causing large immigration of religious refugees from other parts of Europe.[20]

In the first years of the Republic, controversy arose within the Reformed Church, mainly around the subject of predestination. This has become known as the struggle between Arminianism and Gomarism, or between Remonstrants and Contra-Remonstrants. In 1618 the Synod of Dort tackled this issue, which led to the banning of the Remonstrant faith.

Beginning in the 18th century, the situation changed from more or less active persecution of religious services to a state of restricted toleration of other religions, as long as their services took place secretly in private churches.