This theory deals with the long-term qualitative behavior of dynamical systems, and studies the nature of, and when possible the solutions of, the equations of motion of systems that are often primarily mechanical or otherwise physical in nature, such as planetary orbits and the behaviour of electronic circuits, as well as systems that arise in biology, economics, and elsewhere. Much of modern research is focused on the study of chaotic systems. 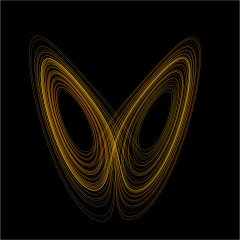 The Lorenz attractor is an example of a non-linear dynamical system. Studying this system helped give rise to chaos theory.

An important goal is to describe the fixed points, or steady states of a given dynamical system; these are values of the variable that don't change over time. Some of these fixed points are attractive, meaning that if the system starts out in a nearby state, it converges towards the fixed point.

Similarly, one is interested in periodic points, states of the system that repeat after several timesteps. Periodic points can also be attractive. Sharkovskii's theorem is an interesting statement about the number of periodic points of a one-dimensional discrete dynamical system.

The concept of dynamical systems theory has its origins in Newtonian mechanics. There, as in other natural sciences and engineering disciplines, the evolution rule of dynamical systems is given implicitly by a relation that gives the state of the system only a short time into the future.

Before the advent of fast computing machines, solving a dynamical system required sophisticated mathematical techniques and could only be accomplished for a small class of dynamical systems.

The dynamical system concept is a mathematical formalization for any fixed "rule" that describes the time dependence of a point's position in its ambient space. Examples include the mathematical models that describe the swinging of a clock pendulum, the flow of water in a pipe, and the number of fish each spring in a lake.

A dynamical system has a state determined by a collection of real numbers, or more generally by a set of points in an appropriate state space. Small changes in the state of the system correspond to small changes in the numbers. The numbers are also the coordinates of a geometrical space—a manifold. The evolution rule of the dynamical system is a fixed rule that describes what future states follow from the current state. The rule may be deterministic (for a given time interval only one future state follows from the current state) or stochastic (the evolution of the state is subject to random shocks).

In mathematics, a nonlinear system is a system that is not linear—i.e., a system that does not satisfy the superposition principle. Less technically, a nonlinear system is any problem where the variable(s) to solve for cannot be written as a linear sum of independent components. A nonhomogeneous[clarification needed] system, which is linear apart from the presence of a function of the independent variables, is nonlinear according to a strict definition, but such systems are usually studied alongside linear systems, because they can be transformed to a linear system as long as a particular solution is known.

Arithmetic dynamics is a field that emerged in the 1990s that amalgamates two areas of mathematics, dynamical systems and number theory. Classically, discrete dynamics refers to the study of the iteration of self-maps of the complex plane or real line. Arithmetic dynamics is the study of the number-theoretic properties of integer, rational, p-adic, and/or algebraic points under repeated application of a polynomial or rational function.

Chaos theory describes the behavior of certain dynamical systems – that is, systems whose state evolves with time – that may exhibit dynamics that are highly sensitive to initial conditions (popularly referred to as the butterfly effect). As a result of this sensitivity, which manifests itself as an exponential growth of perturbations in the initial conditions, the behavior of chaotic systems appears random. This happens even though these systems are deterministic, meaning that their future dynamics are fully defined by their initial conditions, with no random elements involved. This behavior is known as deterministic chaos, or simply chaos.

The study of complex systems is bringing new vitality to many areas of science where a more typical reductionist strategy has fallen short. Complex systems is therefore often used as a broad term encompassing a research approach to problems in many diverse disciplines including neurosciences, social sciences, meteorology, chemistry, physics, computer science, psychology, artificial life, evolutionary computation, economics, earthquake prediction, molecular biology and inquiries into the nature of living cells themselves.

Control theory is an interdisciplinary branch of engineering and mathematics, that deals with influencing the behavior of dynamical systems.

Ergodic theory is a branch of mathematics that studies dynamical systems with an invariant measure and related problems. Its initial development was motivated by problems of statistical physics.

Functional analysis is the branch of mathematics, and specifically of analysis, concerned with the study of vector spaces and operators acting upon them. It has its historical roots in the study of functional spaces, in particular transformations of functions, such as the Fourier transform, as well as in the study of differential and integral equations. This usage of the word functional goes back to the calculus of variations, implying a function whose argument is a function. Its use in general has been attributed to mathematician and physicist Vito Volterra and its founding is largely attributed to mathematician Stefan Banach.

Symbolic dynamics is the practice of modelling a topological or smooth dynamical system by a discrete space consisting of infinite sequences of abstract symbols, each of which corresponds to a state of the system, with the dynamics (evolution) given by the shift operator.

System dynamics is an approach to understanding the behaviour of complex systems over time. It deals with internal feedback loops and time delays that affect the behaviour of the entire system.[2] What makes using system dynamics different from other approaches to studying complex systems is the use of feedback loops and stocks and flows. These elements help describe how even seemingly simple systems display baffling nonlinearity.

Dynamical system theory has been applied in the field of neuroscience and cognitive development, especially in the neo-Piagetian theories of cognitive development. It is the belief that cognitive development is best represented by physical theories rather than theories based on syntax and AI. It also believed that differential equations are the most appropriate tool for modeling human behavior. These equations are interpreted to represent an agent's cognitive trajectory through state space. In other words, dynamicists argue that psychology should be (or is) the description (via differential equations) of the cognitions and behaviors of an agent under certain environmental and internal pressures. The language of chaos theory is also frequently adopted.

In it, the learner's mind reaches a state of disequilibrium where old patterns have broken down. This is the phase transition of cognitive development. Self-organization (the spontaneous creation of coherent forms) sets in as activity levels link to each other. Newly formed macroscopic and microscopic structures support each other, speeding up the process. These links form the structure of a new state of order in the mind through a process called scalloping (the repeated building up and collapsing of complex performance.) This new, novel state is progressive, discrete, idiosyncratic and unpredictable.[4]

Dynamic systems theory has recently been used to explain a long-unanswered problem in child development referred to as the A-not-B error.[5]