Dz is a digraph of the Latin script, consisting of the consonants D and Z. It may represent /d͡z/, /t͡s/, or /z/, depending on the language.

Dz generally represents /d͡z/ in Latin alphabets, including Hungarian, Kashubian, Latvian, Lithuanian, Polish, and Slovak. However, in Dene Suline (Chipewyan) and Cantonese Pinyin it represents /t͡s/, and in Vietnamese it is a pronunciation respelling of the letter D to represent /z/.[1]

Some Esperanto grammars, notably Plena Analiza Gramatiko de Esperanto,[2] consider dz to be a digraph for the voiced affricate [d͡z], as in "edzo" "husband". The case for this is "rather weak".[3] Most Esperantists, including Esperantist linguists (Janton,[4] Wells[5]), reject it.

⟨Dz⟩ is the seventh letter of the Hungarian alphabet. It is called dzé (IPA: [d͡zeː]) as a letter of the alphabet, where it represents the voiced alveolar affricate phoneme /dz/.

Like most Hungarian consonants, the sound /dz/ can be geminated. However, the letter is only doubled in writing (to ⟨ddz⟩) when an assimilated suffix is added to the stem: eddze, lopóddzon.

In several words, it is pronounced long, e.g.

In some other ones, short, e.g.

In several verbs ending in -dzik (approximately fifty), it can be pronounced either short or long, e.g.

Usage of this letter is similar to that of Polish and Slovak languages: though ⟨dz⟩ is a digraph composed of ⟨d⟩ and ⟨z⟩, it is considered one letter, and even acronyms keep the letter intact.

dz generally represents [d͡z]. However, when followed by i it is palatalized to [d͡ʑ].

Compare dz followed by i:

In Slovak, the digraph dz is the ninth letter of the Slovak alphabet. Example words with this phoneme include:

The digraph may never be divided by hyphenation:

However, when d and z come from different morphemes, they are treated as separate letters, and must be divided by hyphenation:

In both cases od- (from) and nad- (above) are a prefix to the stems zem (earth) and zvuk (sound). 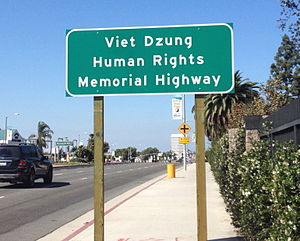 Dz is sometimes used in Vietnamese names as a pronunciation respelling of the letter D. Several common Vietnamese given names start with the letter D, including Dũng, Dụng, and Dương. Whereas D is pronounced as some sort of dental or alveolar stop in most Latin alphabets, an unadorned D in the Vietnamese alphabet represents either /z/ (Hanoian) or /j/ (Saigonese), while the letter Đ represents a voiced alveolar implosive (/ɗ/) or, according to Thompson (1959), a preglottalized voiced alveolar stop (/ʔd/).[6] Z is not included in the Vietnamese alphabet as a letter in its own right.

Many Vietnamese cultural figures spell their family names, pen names, or stage names with Dz instead of D, emphasizing the Hanoian pronunciation. Examples include the songwriter Dzoãn Mẫn, the poet Hồ Dzếnh, and the television chef Nguyễn Dzoãn Cẩm Vân.[7] Other examples include Bùi Dzinh and Trương Đình Dzu.

Some Overseas Vietnamese residing in English-speaking countries also replace D with Dz in their names. A male named Dũng may spell his name Dzung to avoid being called "dung" in social contexts.[1] Examples of this usage include Vietnamese-Americans Việt Dzũng and Dzung Tran. (Occasionally, D is instead replaced by Y to emphasize the Saigonese pronunciation, as with Yung Krall.[8])

DZ is represented in Unicode as three separate glyphs within the Latin Extended-B block. It is one of the rare characters that has separate glyphs for each of its uppercase, title case, and lowercase forms.

The single-character versions are designed for compatibility with Yugoslav encodings supporting Romanization of Macedonian, where this digraph corresponds to the Cyrillic letter Ѕ.

Additional variants of the Dz digraph are also encoded in Unicode.