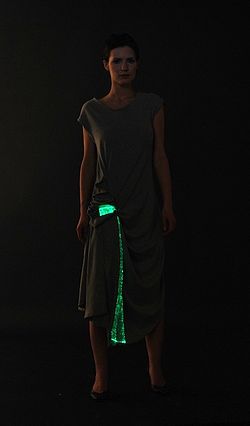 LEDs and fiber optics as part of women's fashion

E-textiles, also known as smart garments, smart clothing, electronic textiles, smart textiles, or smart fabrics, are fabrics that enable digital components (including small computers), and electronics to be embedded in them. Smart textiles are fabrics that have been developed with new technologies that provide added value to the wearer. Pailes-Friedman of the Pratt Institute states that "what makes smart fabrics revolutionary is that they have the ability to do many things that traditional fabrics cannot, including communicate, transform, conduct energy and even grow".[1]

Smart textiles can be broken into two different categories: aesthetic and performance enhancing. Aesthetic examples include everything from fabrics that light up to fabrics that can change color. Some of these fabrics gather energy from the environment by harnessing vibrations, sound or heat, reacting to this input. Then there are performance enhancing smart textiles, which will have a huge impact on the athletic, extreme sports and military industries. There are fabrics that help regulate body temperature, reduce wind resistance and control muscle vibration – all of which help improve athletic performance. Other fabrics have been developed for protective clothing to guard against extreme environmental hazards like radiation and the effects of space travel. The health and beauty industry is also taking advantage of these innovations, which range from drug-releasing medical textiles, to fabric with moisturizer, perfume, and anti-aging properties.[1] Many smart clothing, wearable technology, and wearable computing projects involve the use of e-textiles.[2]

Electronic textiles are distinct from wearable computing because emphasis is placed on the seamless integration of textiles with electronic elements like microcontrollers, sensors, and actuators. Furthermore, e-textiles need not be wearable. For instance, e-textiles are also found in interior design.

The related field of fibretronics explores how electronic and computational functionality can be integrated into textile fibers.

The basic materials needed to construct e-textiles, conductive threads and fabrics have been around for over 1000 years. In particular, artisans have been wrapping fine metal foils, most often gold and silver, around fabric threads for centuries.[3] Many of Queen Elizabeth I's gowns, for example, are embroidered with gold-wrapped threads.

At the end of the 19th century, as people developed and grew accustomed to electric appliances, designers and engineers began to combine electricity with clothing and jewelry—developing a series of illuminated and motorized necklaces, hats, broaches and costumes.[4][5] For example, in the late 1800s, a person could hire young women adorned in light-studded evening gowns from the Electric Girl Lighting Company to provide cocktail party entertainment.[6]

In 1968, the Museum of Contemporary Craft in New York City held a ground-breaking exhibition called Body Covering that focused on the relationship between technology and apparel. The show featured astronauts’ space suits along with clothing that could inflate and deflate, light up, and heat and cool itself.[7] Particularly noteworthy in this collection was the work of Diana Dew, a designer who created a line of electronic fashion, including electroluminescent party dresses and belts that could sound alarm sirens.[8]

In 1985, inventor Harry Wainwright created the first fully animated sweatshirt. The shirt consisted of fiber optics, leads, and a microprocessor to control individual frames of animation. The result was a full color cartoon displayed on the surface of the shirt. in 1995, Wainwright went on to invent the first machine enabling fiber optics to be machined into fabrics, the process needed for manufacturing enough for mass markets and, in 1997, hired a German machine designer, Herbert Selbach, from Selbach Machinery to produce the world's first CNC machine able to automatically implant fiber optics into any flexible material. Receiving the first of a dozen patents based on LED/Optic displays and machinery in 1989, the first CNC machines went into production in 1998 beginning with the production of animated coats for Disney Parks in 1998. The first ECG bio-physical display jackets employing LED/optic displays were created by Wainwright and David Bychkov, the CEO of Exmovere at the time in 2005 using GSR sensors in a watch connected via Bluetooth to the embedded machine washable display in a denim jacket and were demonstrated at the Smart Fabrics Conference held in Washington, D.C. May 7, 2007. Additional smart fabric technologies were unveiled by Wainwright at two Flextech Flexible Display conferences held in Phoenix, AZ, showing infrared digital displays machine-embedded into fabrics for IFF (Identification of Friend or Foe) which were submitted to BAE Systems for evaluation in 2006 and won an "Honorable Mention" award from NASA in 2010 on their Tech Briefs, "Design the Future" contest. MIT personnel purchased several fully animated coats for their researchers to wear at their demonstrations in 1999 to bring attention to their "Wearable Computer" research. Wainwright was commissioned to speak at the Textile and Colorists Conference in Melbourne, Australia on June 5, 2012 where he was requested to demonstrate his fabric creations that change color using any smart phone, indicate callers on mobile phones without a digital display, and contain WIFI security features that protect purses and personal items from theft.

In the mid 1990s a team of MIT researchers led by Steve Mann, Thad Starner, and Sandy Pentland began to develop what they termed wearable computers. These devices consisted of traditional computer hardware attached to and carried on the body. In response to technical, social, and design challenges faced by these researchers, another group at MIT, that included Maggie Orth and Rehmi Post, began to explore how such devices might be more gracefully integrated into clothing and other soft substrates. Among other developments, this team explored integrating digital electronics with conductive fabrics and developed a method for embroidering electronic circuits.[9][10] One of the first commercially available wearable Arduino based microcontrollers, called the Lilypad Arduino, was also created at the MIT Media Lab by Leah Buechley.

Fashion houses like CuteCircuit are utilizing e-textiles for their haute couture collections and specialty projects. CuteCircuit's Hug Shirt allows the user to send electronic hugs through sensors within the garment.

The field of e-textiles can be divided into two main categories:

Most research and commercial e-textile projects are hybrids where electronic components embedded in the textile are connected to classical electronic devices or components. Some examples are touch buttons that are constructed completely in textile forms by using conducting textile weaves, which are then connected to devices such as music players or LEDs that are mounted on woven conducting fiber networks to form displays.[11]

Printed sensors for both physiological and environmental monitoring have been integrated into textiles[12] including cotton,[13] Gore-Tex,[14] and neoprene.[15]

One of the most important issues of e-textiles is that the fibers should be washable. Electrical components would thus need to be insulated during washing to prevent damage.[citation needed]

A new class of electronic materials that are more suitable for e-textiles is the class of organic electronics materials, because they can be conducting, as well as semiconducting, and designed as inks and plastics.[citation needed]

Some of the most advanced functions that have been demonstrated in the lab include: