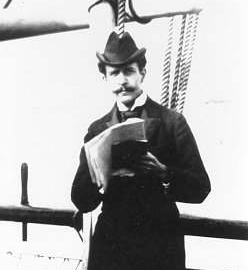 Eugène Michel Antoniadi (Greek: Εὐγένιος Μιχαὴλ Αντωνιάδης; 1 March 1870, Constantinople – 10 February 1944, Paris) was a Greek astronomer, born in Asia Minor, who spent most of his life in France when invited there by Camille Flammarion.[1] He was also known as Eugenios Antoniadis. His name is also sometimes given as Eugène Michael Antoniadi or even (incorrectly) as Eugène Marie Antoniadi.

Antoniadi became a highly reputed observer of Mars, and at first supported the notion of Martian canals, but after using the 83 centimeter telescope at Meudon Observatory during the 1909 opposition of Mars, he came to the conclusion that canals were an optical illusion. He also observed Venus and Mercury. He made the first attempts to draw a map of Mercury, but his maps were flawed by his incorrect assumption that Mercury had synchronous rotation with the Sun.[citation needed] The first standard nomenclature for Martian albedo features was introduced by the International Astronomical Union (IAU) when they adopted 128 names from the 1929 map of Antoniadi named La Planète Mars.[2]

A crater on Mars and the crater Antoniadi on the Moon were named in his honor, as well as Antoniadi Dorsum on Mercury itself. He is also famed for creating the Antoniadi scale of seeing, which is commonly used by amateur astronomers. He was also a strong chess player. His best result was equal first with Frank Marshall in a tournament in Paris in 1907, a point ahead of Savielly Tartakower.