From Infogalactic: the planetary knowledge core
(Redirected from EAN-13)
Jump to: navigation, search 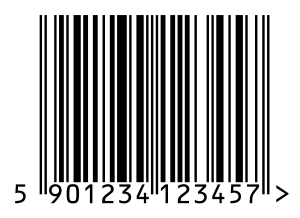 GTIN-13 number encoded in EAN-13 barcode. The first digit is always placed outside the symbol; additionally a right ">" indicator is used to indicate a "Quiet Zone" that is necessary for barcode scanners to work properly.

An EAN-13 barcode (originally European Article Number, but now renamed International Article Number even though the abbreviation EAN has been retained) is a 13 digit (12 data and 1 check) barcoding standard which is a superset of the original 12-digit Universal Product Code (UPC) system developed in 1970 by George J. Laurer.[1] The EAN-13 barcode is defined by the standards organization GS1.

The 13 digits in the EAN-13 barcode are grouped as follows:

The less commonly used EAN-8 barcodes are also used for marking retail goods; however, they are usually reserved for smaller items, for example confectionery.

2-digit (EAN 2) and 5-digit (EAN 5) supplemental barcodes may be added for a total of 14 or 17 data digits. These are generally used for periodicals (to indicate the current year's issue number[2] ), or books and weighed products like food (to indicate the manufacturer suggested retail price or MSRP[3] ), respectively.

The GTIN-13 encoded in the bar code has four components:

The complete number is used as a reference key to look up information about the product line held on a database; the number is not normally broken down into its components within users' systems.

The first two or three digits of the GTIN of any product identify the GS1 Member Organization which the manufacturer has joined. Note that EAN-13 codes beginning with 0 were rarely seen, as this is just a longer form of a 12-digit UPC and is represented by the same barcode, but in the last few years, more products sold by retailers outside United States and Canada have been using EAN-13 codes beginning with 0, since they were generated by GS1-US.

The 200-299 country code is worth a special mention; most GS1 member organizations define this as being available for retailer internal use (or internal use by other types of business). Some retailers use this for proprietary (own brand or unbranded) products (although many retailers obtain their own manufacturer's code for their own brands); some retailers use at least part of this prefix for products which are packaged in store, for example, items weighed and served over a counter for a customer. The barcode may encode a price, quantity or weight along with a product identifier (in a retailer defined way); the product identifier may be one assigned by the Produce Electronic Identification Board or may be retailer assigned. Retailers who have historically used UPC barcodes will tend to use GS1 prefixes 04 (for products) and 02 (for store packaged products) in a similar way.

The checksum digit must be calculated from the data digits before it can be encoded. The checksum is calculated taking a varying weight value times the value of each number in the barcode to make a sum. The checksum digit is then the digit which must be added to this sum to get a number evenly divisible by 10 (i.e. the additive inverse of the sum, modulo 10). See ISBN check digit calculation for a more extensive description and algorithm. The Global Location Number/GLN also uses the same method.[5]

The weight for a specific position in the EAN code is either 3 or 1, which alternate so that the final data digit has a weight of 3 (and thus the check digit has a weight of 1); the same algorithm is used in other GTINs and the Serial Shipping Container Code (SSCC). Numbering the positions from the right, the odd data digits are always weight 3 and the even data digits are always weight 1, regardless of the length of the code. [6] All GTIN and SSCC codes get their weight values for the position of the code from this table, making their code line up to the right: 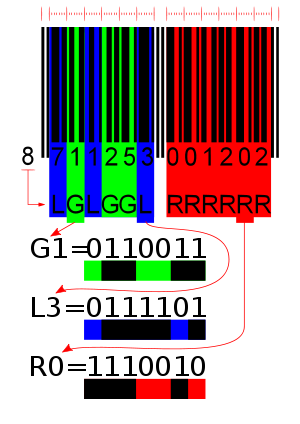 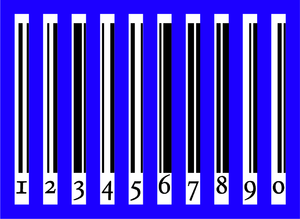 the numbers of code L 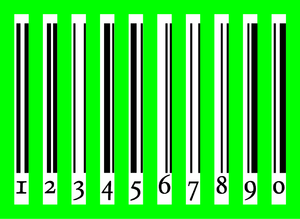 the numbers of code G 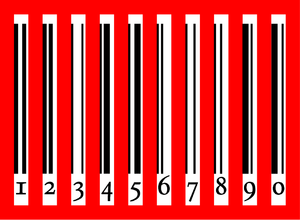 the numbers of code R

To encode an EAN-13 barcode, the digits are first split into 3 groups; the first digit, the first group of 6 and the last group of 6. The first group of six is encoded using a scheme whereby each digit has two possible encodings, one of which has even parity and one of which has odd parity. The first digit is encoded by selecting a pattern of choices between these two encodings for the next six digits, according to the table below. (Unlike the other digits, the first digit is not represented directly by a pattern of bars.) All digits in the last group of six digits are encoded using a single set of patterns which are the same patterns used for UPC.

If the first digit is zero, all digits in the first group of six are encoded using the patterns used for UPC, therefore, a UPC barcode is also an EAN-13 barcode with the first digit set to zero.

The EAN country codes 978 (and later 979) have been allocated since the 1980s to reserve a Unique Country Code (UCC) prefix for EAN identifiers of published books, regardless of country of origin, so that the EAN space can catalog books by ISBN rather than maintaining a redundant parallel numbering system. Similar arrangements are in place for ISSNs for periodicals (country code 977) and ISMNs for sheet music (country code 979).

Japanese Article Number (JAN) is a barcode standard compatible with the International Article Number scheme. Use of the JAN standard began in 1978.[7] In January 2001 the manufacturer code changed to 7 digits (9 digits including the country code) for new companies.

How the GTIN (formerly EAN-13) is encoded

The code families UPC-A, EAN-8 and EAN-13 all use the same encoding. The encoded information is repeated in plain text below the barcode.

The barcode consists of 95 equally spaced areas. From left to right:

The start marker and the end marker are encoded as 101. The center marker is encoded as 01010.

Each digit in GTIN, except digit 1, consists of seven bits (seven areas). A decimal number between 0 and 9 is encoded so that it consists of two bars and two spaces. The combination of widths of the bars and spaces encodes the number.

The encoding is described in the following table:

For each digit there are three similar encodings: Left even and right are mirror-symmetrical to each other. Left odd is the bitwise inverse of right.

The first digit from the left is always encoded with odd parity, and the last digit (on the right side) is always encoded with even parity. It thus does not matter whether the barcode is scanned from the left or from the right: The scanning software can determine what is the beginning and end of the barcode, with the help of the fact that the first digit should have odd parity and the last digit should have even parity.

EAN-13 barcode. A green bar indicates the bars and spaces that encode a digit. 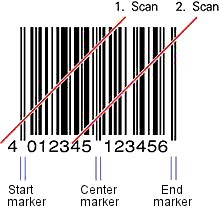 Scanning part of an EAN-13 barcode.

By using the barcode center marker, it is possible for a barcode scanner to scan just one half of the barcode at a time. This allows reconstruction of the code by means of a helical scan of the barcode by an angle of approximately 45 degrees.