ECAC Hockey is one of the six conferences that compete in NCAA Division I ice hockey. The conference used to be affiliated with the Eastern College Athletic Conference, a consortium of over 300 colleges in the eastern United States. This relationship ended in 2004; however the ECAC abbreviation was retained in the name of the hockey conference.[1] ECAC Hockey is the only ice hockey conference with identical memberships in both its women's and men's divisions.

ECAC Hockey was founded in 1961 as a loose association of college hockey teams in the Northeast.[2] In June 1983, concerns that the Ivy League schools were potentially leaving the conference and disagreements over schedule length versus academics caused Boston University, Boston College, Providence, Northeastern and New Hampshire to decide to leave the ECAC to form what would become Hockey East, which began play in the 1984–85 season.[1] By that fall, Maine also departed the ECAC for the new conference.[3] This left the ECAC with twelve teams (Army, Brown, Clarkson, Colgate, Cornell, Dartmouth, Harvard, Princeton, RPI, St. Lawrence, Vermont, and Yale). Army would stay in the conference until the end of the 1990–91 season, at which point they became independent (they now play in Atlantic Hockey) and were replaced by Union College. Vermont left the ECAC for Hockey East at the end of the 2004–05 season, and were replaced in the conference by Quinnipiac.[1]

The ECAC was the only Division I men's hockey conference that neither gained nor lost members during the major conference realignment in 2011 and 2012 that followed the Big Ten Conference's announcement that it would launch a men's hockey league in the 2013–14 season.

There are 12 member schools in the ECAC. Beginning with the 2006-07 season, all schools participate with men's and women's teams, making ECAC Hockey the only Division I hockey conference with a full complement of teams for both sexes.[1]

The six Ivy League universities with Division I ice hockey programs are all members of ECAC Hockey. Neither the University of Pennsylvania nor Columbia University has a varsity intercollegiate ice hockey program. Penn supported an intercollegiate varsity hockey program in the past and was an ECAC Hockey member from 1966 to 1978 before the team was disbanded. The Ivy school that has the best record against other Ivy opponents in regular season ECAC games is crowned the Ivy League ice hockey champion. The Ivy League schools require their teams to play seasons that are about three weeks shorter than those of the other schools in the league.[5] Thus, they enter the league schedule with fewer non-conference warm-up games. Harvard competes in the annual Beanpot Tournament and Cornell hosts a holiday tournament in Estero, Florida. 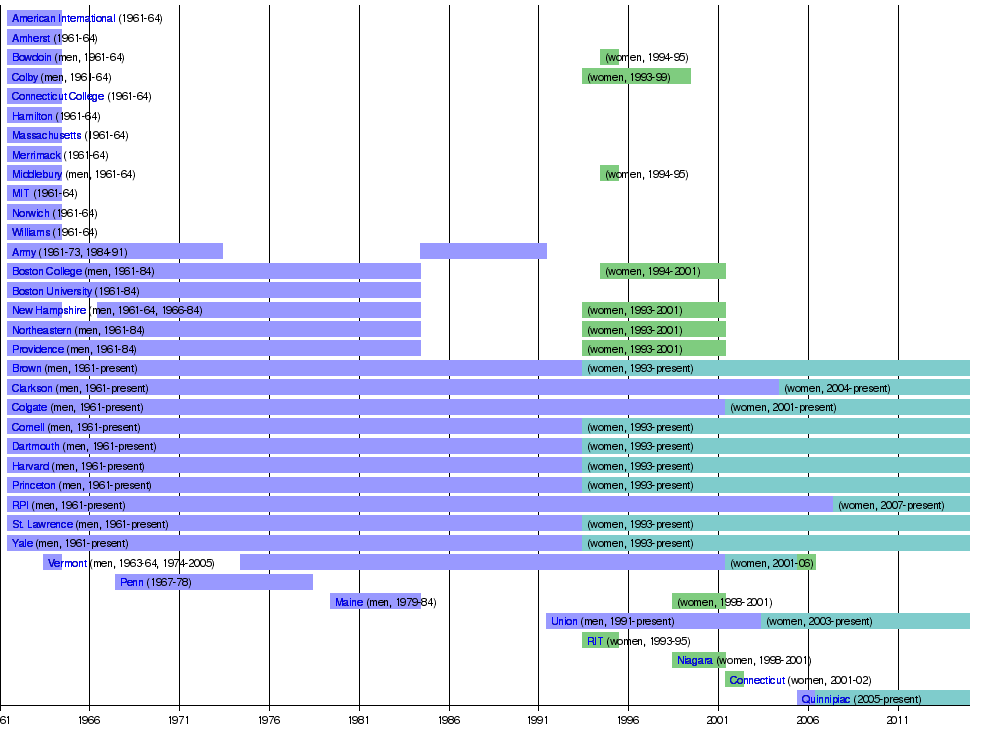 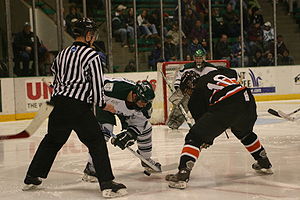 The ECAC Championship Game has been held at the following sites:

The winner of the game is awarded the Whitelaw Cup and receives an automatic bid to the NCAA Men's Division I Hockey Tournament.

The Cleary Cup, named for former Harvard player and coach Bill Cleary, is awarded to the team with the best record in league games at the end of the regular–season. There is no tie–breaking procedure should two or more teams end the season with the same record and the trophy is shared. A tie breaking procedure is applied to determine the top seed in the ECAC conference tournament. The Cleary Cup winner is not given any special consideration in the NCAA tournament as the ECAC awards its automatic bid to the winner of the ECAC tournament.

File:TDBanknorthSportsCenterHockey.jpg
A Men's game between Dartmouth and Quinnipiac at the TD Bank Sports Center

At the conclusion of each regular season schedule the coaches of each ECAC team vote which players they choose to be on the two to four All-Conference Teams:[15] first team and second team (rookie team starting in 1987–88 and third team beginning in 2005–06). Additionally they vote to award up to 7 individual trophies to an eligible player at the same time. ECAC Hockey also awards a Conference Tournament Most Outstanding Player as well as an All-Tournament Team, which are voted on at the conclusion of the conference tournament. Three awards have been bestowed every year that ECAC has been in operation while the 'Best Defensive Defenseman' was retired from 1967–68 thru 1991–92[16] and the All-Tournament team was discontinued from 1973 thru 1988.[17]