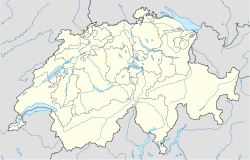 The École polytechnique fédérale de Lausanne (EPFL, English: Swiss Federal Institute of Technology in Lausanne) is a research university in Lausanne, Switzerland, that specialises in physical sciences and engineering.[4]

EPFL is located in the French-speaking part of Switzerland; the sister institution in the German-speaking part of Switzerland is the Swiss Federal Institute of Technology in Zurich (ETH Zurich). Associated with several specialised research institutes, the two universities form the Swiss Federal Institutes of Technology Domain (ETH Domain), which is directly dependent on the Federal Department of Economic Affairs, Education and Research.[7] In connection with research and teaching activities, EPFL operates a nuclear reactor CROCUS,[8] a Tokamak Fusion reactor,[9] a Blue Gene/Q Supercomputer[10] and P3 bio-hazard facilities.

The roots of modern-day EPFL can be traced back to the foundation of a private school under the name École spéciale de Lausanne in 1853 at the initiative of Lois Rivier, a graduate of the École Centrale Paris and John Gay, the then professor and rector of the Académie de Lausanne. At its inception it had only eleven students and the offices was located at Rue du Valentin in Lausanne. In 1869, it became the technical department of the public Académie de Lausanne. When the Académie was reorganised and acquired the status of a university in 1890, the technical faculty changed its name to École d'ingénieurs de l'Université de Lausanne. In 1946, it was renamed the École polytechnique de l'Université de Lausanne (EPUL). In 1969, the EPUL was separated from the rest of the University of Lausanne and became a federal institute under its current name. EPFL, like ETH Zurich, is thus directly controlled by the Swiss federal government. In contrast, all other universities in Switzerland are controlled by their respective cantonal governments. Following the nomination of Patrick Aebischer as president in 2000, EPFL has started to develop into the field of life sciences. It absorbed the Swiss Institute for Experimental Cancer Research (ISREC) in 2008.[11]

In 1946, there were 360 students. In 1969, EPFL had 1,400 students and 55 professors. In the past two decades the university has grown rapidly and as of 2012 roughly 14,000 people study or work on campus, about 9,300 of these beings Bachelor, Master or PhD students. As EPFL first became a federal institute under its current name in 1969, with a student body of then less than 1500, the university is included in the Times Higher Education list of top 100 universities under 50 years old. The environment at modern day EPFL is highly international with the school now attracting top students and researchers from all over the world. More than 125 countries are represented on the campus and the university has two official languages, French and English.

Like every public university in Switzerland, EPFL is obliged to grant admission to every Swiss resident who took the maturité high-school certificate recognized by the Swiss Federation. As such, for Swiss students, EPFL is not selective in its undergraduate admission procedures.

As at all universities in Switzerland, the academic year is divided into two semesters. Regular time to reach graduation is six semesters for the Bachelor of Science degree and four additional semesters for the Master of Science degree. Though only 58% of the student's who manage to graduate are able to graduate within this time-period.[12] The possibility to study abroad for one or two semesters is offered during the 3rd year of study under certain conditions as EPFL maintains several long-standing student exchange programs, such as the junior year engineering and science program with Carnegie Mellon University in the United States, as well as a graduate Aeronautics and Aerospace program with the ISAE in France. The final semester is dedicated to writing a thesis.

Entrepreneurship is actively encouraged to foster a start-up culture among the student body as evident by the EPFL-Innovationpark being an integral part of campus. Since 1997, 12 start-ups have been created per year on average by EPFL students and faculty. In the year 2013, a total of 105 million CHF was raised by EPFL start-ups.[13]

The three most widely observed international university rankings, QS World University Rankings, Academic Ranking of World Universities and Times Higher Education World University Rankings ranks EPFL No. 2, No. 1 and No. 2 respectively in the field of Engineering and Technology on continental Europe in their 2015–2016 rankings. In the rankings EPFL competes with Cambridge, Oxford, Imperial College London and its sister institution, ETH Zurich, for the European top five spots in Engineering and Technology.

EPFL typically scores high on faculty to student ratio, international outlook and scientific impact. The specialised CWTS Leiden Ranking[18] that "aims to provide highly accurate measurements of the scientific impact of universities" ranks EPFL world No. 13 and No. 1 in Europe in the 2013 rankings for all the sciences. Similarly, in the THE World University Rankings 2014-2015, EPFL ranks 15th in the world and 2nd in Europe on the citation index score.

Although EPFL generally rank well on academic measures such as citation index and scientific impact, due to the young age of the school, it tends to rank comparatively low in name-brand surveys, a recent example being the Times 2015 reputation ranking where EPFL was ranked No. 48 in the world.[19] In recent years, multiple EPFL faculty members has been selected as Young Global Leader or as Young Scientist by the World Economic Forum, increasing the visibility of EPFL outside tech-circles.[20] 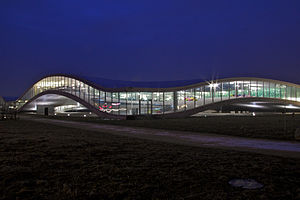 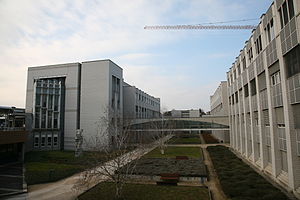 The MX buildings.
File:Swiss tech convention center.JPG
The Swiss Tech Convention Center.
File:Vue aérienne EPFL 07-2009.jpg
Aerial view of the EPFL, which forms a large campus with the University of Lausanne (UNIL) at the shores of Lake Geneva.

The École d'ingénieurs de l'Université de Lausanne, from which EPFL in its modern-day form originates, was located in the center of Lausanne. In 1974, 5 years after EPFL was separated from University of Lausanne and became a federal institute under its current name, the construction of a new campus at Dorigny in Écublens, a suburb south-west of Lausanne on the shores of Lake Geneva, began. The inauguration of the first EPFL buildings of the new campus took place in 1978.

Together with the University of Lausanne, also located in Écublens, the EPFL forms a vast campus, welcoming about 20,000 students, at the shores of Lake Geneva. The campus is served by the Lausanne Metro Line 1 (M1) and is equipped with an electric bicycle sharing system.[21] Since 2012, only electricity from certified hydroelectric generation is being bought by EPFL to power it's campus. EPFL was the first campus to receive the International Sustainable Campus Excellence Award by the International Sustainable Campus Network.[22]

Of the 14,000 people that work and study at the Ecole Polytechnique Fédérale de Lausanne campus, roughly 9.300 are students in either Bachelor, Master or Doctoral programs, the remaining 4,700 being administrative staff, scientists, technical staff, professors and the entrepreneurs located in the Science Park EPFL7. More than 125 nationalities are present on campus with 48% of the student population being foreign nationals.[23]

Almost all of the structures of the EPFL are located on its main campus. However, it also has branches in Neuchâtel ("Microcity"), in Sion ("Pôle EPFL Valais"),[24] in Geneva (Campus Biotech, including the Wyss Center for Bio- and Neuro-engineering) and in Fribourg ("Smart Living Lab").

The campus consists of about 65 buildings on 136 acres (55 ha). Built according to the growth of the school, the campus includes different types of architectures:

The EPFL and the University of Lausanne also share an active sports centre five minutes away from EPFL, on the shores of Lake Geneva.[26]

Facilities are available on the campus for the students and staff: 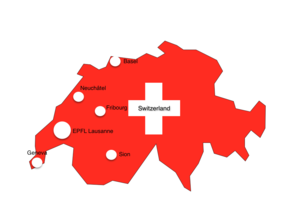 The number of students attending studying at EPFL has been rising heavily since EPFL was formed in 1969 under its current name. In 1969 EPFL had roughly 1400 students, that number had grown to 2367 by 1982, 4302 by 1997 and now 9921 students in 2014. Within the student body, 112 different nationalities are represented. In the period from 1982 to 2014 the female proportion of the student body has increased from 12% to 27%. The proportion of female students is lowest at the School of Computer Science and Communication, 15%, and highest at the School of Life Sciences, 49%.[1] 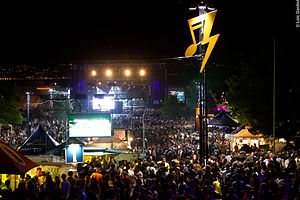 The Festival Balélec is a music festival organised annually at the EPFL campus.

The Archimedean Oath is an ethical code of practice for engineers and technicians, similar to the Hippocratic Oath used in the medical world:

"I commit to keeping completely, to the full extent of my capacities and judgment, the following promises:

I shall use my knowledge for the benefit of mankind. I shall not put my skill to the service of people who do not respect Human Rights I shall not permit consideration regarding religion, nationality, race, sex, wealth and politics to harm people affected by my actions. I shall bear the entire responsibility for my actions and shall in no way discharge them on another. I shall practice in respect for the environment. I shall not use my knowledge for destructive purposes. I shall practice my profession in complete intellectual honesty, with conscience and dignity. I solemnly take this oath, freely and on my honour." 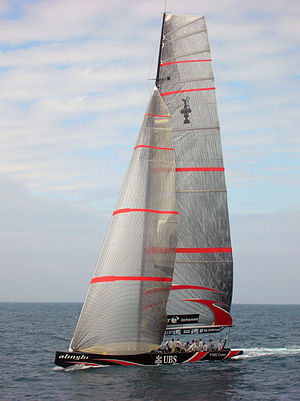 Alinghi SUI100 during a training session in Valencia. 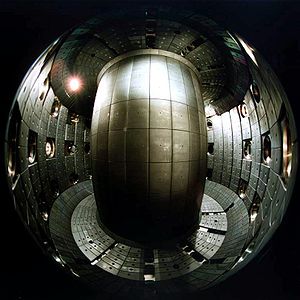 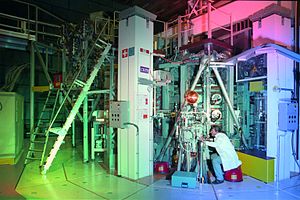 Outside view of the Tokamak at the EPFL. 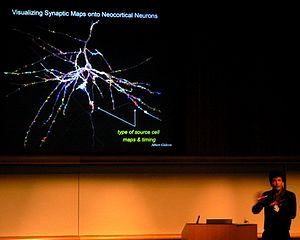 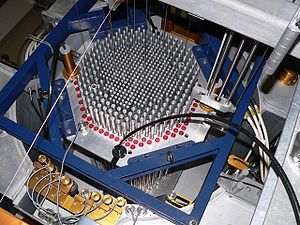 CROCUS, the only nuclear reactor of the French-speaking part of Switzerland

EPFL is organised into seven schools, themselves formed of institutes that group research units (laboratories or chairs) around common themes. The seven schools at EPFL: 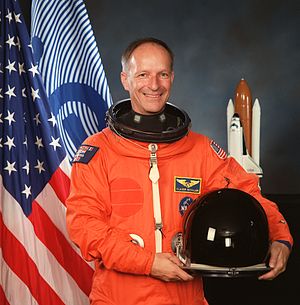 The EPFL has awarded a doctorate honoris causa to several people:

The EPFL has 179 partner universities around the globe.[37]