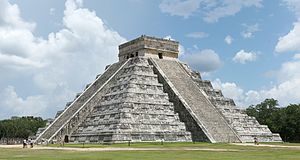 According to building codes, earthquake-resistant structures are intended to withstand the largest earthquake of a certain probability that is likely to occur at their location. This means the loss of life should be minimized by preventing collapse of the buildings for rare earthquakes while the loss of functionality should be limited for more frequent ones.[1]

To combat earthquake destruction, the only method available to ancient architects was to build their landmark structures to last, often by making them excessively stiff and strong, like the El Castillo pyramid at Chichen Itza.

Currently, there are several design philosophies in earthquake engineering, making use of experimental results, computer simulations and observations from past earthquakes to offer the required performance for the seismic threat at the site of interest. These range from appropriately sizing the structure to be strong and ductile enough to survive the shaking with an acceptable damage, to equipping it with base isolation or using structural vibration control technologies to minimize any forces and deformations. While the former is the method typically applied in most earthquake-resistant structures, important facilities, landmarks and cultural heritage buildings use the more advanced (and expensive) techniques of isolation or control to survive strong shaking with minimal damage. Examples of such applications are the Cathedral of Our Lady of the Angels and the Acropolis Museum.

Some of the new trends and/or projects in the field of earthquake engineering structures are presented below.

Based on experience in earthquakes in Eastern European and in Central Asian countries where precast concrete has been widely used as construction material, it can be concluded that their seismic performance has been fairly satisfactory. [2] Based on studies in New Zealand, relating to Christchurch earthquakes, precast concrete designed and installed in accordance with modern codes performed well. [3] According to the Earthquake Engineering Research Institute, precast panel buildings had good durability during the earthquake in Armenia, compared to precast frame-panels. [4]

One Japanese construction company has developed a six-foot cubical shelter, presented as an alternative to earthquake-proofing an entire building.[5]

Thus, two wooden houses built before adoption of the 1981 Japanese Building Code were moved to E-Defense [2] for testing (see both pictures aside). The left house was reinforced to enhance its seismic resistance, while the other one was not. These two models were set on E-Defense platform and tested simultaneously [3].

Designed by architect Merrill W. Baird of Glendale, working in collaboration with A. C. Martin Architects of Los Angeles, the Municipal Services Building at 633 East Broadway, Glendale was completed in 1966 [4]. Prominently sited at the corner of East Broadway and Glendale Avenue, this civic building serves as a heraldic element of Glendale’s civic center.

In October 2004 Architectural Resources Group (ARG) was contracted by Nabih Youssef & Associates, Structural Engineers, to provide services regarding a historic resource assessment of the building due to a proposed seismic retrofit.

In 2008, the Municipal Services Building of the City of Glendale, California was seismically retrofitted using an innovative combined vibration control solution: the existing elevated building foundation of the building was put on high damping rubber bearings. 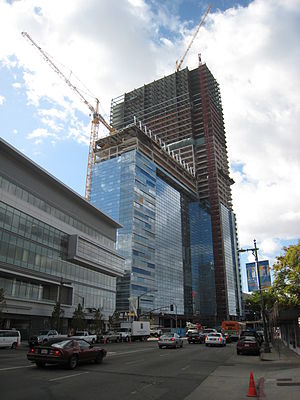 A steel plate shear wall (SPSW) consists of steel infill plates bounded by a column-beam system. When such infill plates occupy each level within a framed bay of a structure, they constitute a SPSW system.[6] Whereas most earthquake resistant construction methods are adapted from older systems, SPSW was invented entirely to withstand seismic activity.[7]

SPSW behavior is analogous to a vertical plate girder cantilevered from its base. Similar to plate girders, the SPSW system optimizes component performance by taking advantage of the post-buckling behavior of the steel infill panels.

The Ritz-Carlton/JW Marriott hotel building, a part of the LA Live development in Los Angeles, California, is the first building in Los Angeles that uses an advanced steel plate shear wall system to resist the lateral loads of strong earthquakes and winds.

The Kashiwazaki-Kariwa Nuclear Power Plant, the largest nuclear generating station in the world by net electrical power rating, happened to be near the epicenter of the strongest Mw 6.6 July 2007 Chūetsu offshore earthquake.[8] This initiated an extended shutdown for structural inspection which indicated that a greater earthquake-proofing was needed before operation could be resumed.[9]

On May 9, 2009, one unit (Unit 7) was restarted, after the seismic upgrades. The test run had to continue for 50 days. The plant had been completely shut down for almost 22 months following the earthquake.

A destructive earthquake struck a lone, wooden condominium in Japan [5]. The experiment was webcast live on July 14, 2009 to yield insight on how to make wooden structures stronger and better able to withstand major earthquakes [6].

“NEESWood aims to develop a new seismic design philosophy that will provide the necessary mechanisms to safely increase the height of wood-frame structures in active seismic zones of the United States, as well as mitigate earthquake damage to low-rise wood-frame structures,” said Rosowsky, Department of Civil Engineering at Texas A&M University. This philosophy is based on the application of seismic damping systems for wooden buildings. The systems, which can be installed inside the walls of most wooden buildings, include strong metal frame, bracing and dampers filled with viscous fluid.