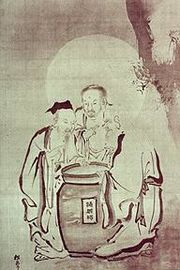 A traditional representation of The Vinegar Tasters, an allegorical image representing Buddhists, Confucianists, and Taoists

In the study of comparative religion, the East Asian religions (also known as Far Eastern religions or Taoic religions) form a subset of the Eastern religions. This group includes Confucianism, Shinto, Taoism, and elements of Mahayana Buddhism; as well as new religious movements such as I-Kuan Tao (Yiguandao), Chen Tao, Cao Đài, Hòa Hảo, Chondogyo, and Jeung San Do.

These traditions or religious philosophies focus on the East Asian concept of Tao 道 ("The Way"; pinyin dào, Korean do, Japanese tō or dō, Vietnamese đạo).

Early Chinese philosophies defined Tao and advocated cultivating Te in that Tao.[2] Some ancient schools have merged into traditions with different names or are no longer active, such as Mohism (and many others of the Hundred Schools of Thought), while some such as Taoism persist to the modern day. East Asian beliefs include polytheism, nontheism, henotheism, monotheism, pantheism, panentheism and agnostic.[3] East Asian religions have many Western adherents, though their interpretations may differ significantly from traditional East Asian thought and culture.

Despite a wide variety of terms, the traditions described as "Far Eastern religions", "East Asian religions" or "Chinese religions" are recognized by scholars as a distinct religious family.[4][5]

Syncretism is a common feature of East Asian religions, often making it difficult to recognize individual faiths.[6][7] Further complications arise from the inconsistent use of many terms. "Tao religion" is often used for Taoism itself, especially Tao chiao,[8] as well as being used as an identifying term for Tao-based new religious movements.[9] The term "Far Eastern religion" can be used to refer only to faiths incorporating "Tao", may include Ch'an and Japanese Buddhism, and can even inclusively refer to all Asian religions.[10][11][12] These problems in distinguishing religious practices and with inconsistency in terminology can make discussion of East Asian religions difficult.

Tao can be roughly stated to be the "flow" of the universe, or the force behind the natural order.[13] Believed to be the influence that keeps the universe balanced and ordered, Tao is associated with nature, due to a belief that nature demonstrates the Tao.[14] The flow of qi, as the essential energy of action and existence, is compared to the universal order of Tao. Similar to the negative theology of Western scholars, Tao is compared to what it is not.[15] It is often considered to be the source of both existence and non-existence.[16]

For more details on this topic, see De (Chinese).

Tao is often associated with "proper" attitude, morality and lifestyle. In practice, the exact meaning of "proper" varies among the East Asian faiths and their branches. This is intimately tied to the complex concept of Te (literally, "virtue"). Te is the active expression of Tao.[17]

Generally, those religions closer to Taoism express Te as "integrity" or "wholeness", while those faiths closer to Confucianism express this concept as "morality" or "sound character".[18]

The three major East Asian traditions are Taoism, Confucianism, and Shinto.[19] Buddhism, although it may be classified as an Indian religion, has significant "Taoic" features in East Asia. Mahayana Buddhism is often considered as having joint heritage in Dharma and Tao traditions. The tentative larger classification of Eastern religions avoids this overlap and cross-pollination of "Indian" and "Far Eastern" religious thought, but loses the importance of the distinction between the doctrines related to Tao and Dharma.

Taoism does not fall strictly under an umbrella or a definition of an organized religion like the Abrahamic traditions, nor can it purely be studied as the originator or a variant of Chinese folk religion, as much of the traditional religion is outside of the tenets and core teachings of Taoism. Robinet asserts that Taoism is better understood as a way of life than as a religion, and that its adherents do not approach or view Taoism the way non-Taoist historians have done.[21]

In general, Taoist propriety and ethics place an emphasis on the unity of the universe, the unity of the material world, and the spiritual world, the unity of the past, present and future; Three Jewels of the Tao; love, moderation, humility.[22] Taoist theology focuses on doctrines of wu wei ("non-action"), spontaneity, relativism and emptiness.[23][24]

Most traditional Chinese Taoists are polytheistic, but there are disagreements regarding the proper composition of their pantheon.[25] Popular Taoism typically presents the Jade Emperor as the head deity. Intellectual (or "elite") Taoism usually presents Laozi and the Three Pure Ones at the top of the pantheon.[26]

Nature and ancestor spirits are common in popular Taoism, but this sort of shamanism is eschewed for an emphasis on internal alchemy among the "elite" Taoists. Tao itself is rarely an object of worship, being treated more like the Indian concept of atman.[27]

Confucianism is a complex system of moral, social, political, and religious thought, influential in the history of East Asia. It is commonly associated with legalism, but actually rejects legalism for ritualism.[28] It also endorses meritocracy as the ideal of nobility.[29] Confucianism includes a complicated system governing duties and etiquette in relationships. Confucian ethics focus on familial duty, loyalty and humaneness.[30] Confucianism recognizes the existence of animistic spirits, ghosts and deities. It advocates paying them proper respect, but paradoxically also encourages avoiding them.[31] Confucian thought is notable as the framework upon which the syncretic Neo-Confucianism was built.[32]

Neo-Confucianism was deliberately created as a syncretism of Taoism, Confucianism and Chinese Buddhism. It is recognized as being formulated and established during the Song dynasty, but its roots can be traced to scholars of the Tang dynasty. It combined Buddhist religious concepts with Taoist yin yang theory and the I Ching, and placed them within the framework of classic Confucianism.[33]

Despite Neo-Confucianism's incorporation of the "best" elements of Buddhism and Taoism, its apologists still decried both faiths.[34] However, its influence on Chinese society has blurred the distinction between all three faiths, even into modern times. Neo-Confucianism was an officially endorsed faith for over five centuries, deeply influencing all of East Asia.[35]

The influence of New Confucianism prompted since Deng Xiaoping became the leader of China in 1978 and helped cultural exchanges between China and Taiwan.[36]

Shinto is an animistic folk religion from Japan. Shinto literally means "the way of the gods". Shinto and Asian Buddhism are inextricably linked in Japan.[37] Many Japanese Shintoists also identify themselves as Buddhists. Japanese Pure Land Buddhism is deeply tied with the Shinto faith.[38] Shinto practitioners commonly affirm tradition, family, nature, cleanliness and ritual observation as core values.[39] Taoist influence is significant in their beliefs about nature and self-mastery. Ritual cleanliness is a central part of Shinto life.[40] Shrines have a significant place in Shinto, reflecting the animistic veneration of the kami.[41] "Folk", or "popular", Shinto features an emphasis on shamanism, particularly divination, spirit possession and faith healing. "Sect" Shinto is a diverse group including mountain-worshippers and Confucian Shintoists.[42]

Chan Buddhism (more commonly known in the West as Zen Buddhism) is a form of Mahayana Buddhism deeply influenced by Taoism[43] which emphasizes awareness, meditation and direct experience. Chan Buddhism takes a critical view of textual hermeneutics, the limitations of language and dogmatic assertions.[44] Zazen, sitting meditation, is a central practice. Eschewing scriptural study for direct communication, Chan places a high regard for the teacher-disciple relationship.[45] Ideal instructors are lionized in Chan stories. The lineage of a teaching is considered more important than its comparison with a test of orthodoxy.[46] Dialogues and stories called koans are a distinctive feature of Chan Buddhism. Koans often appear paradoxical or meaningless, but they are deployed as vehicles for the transformation of the perspective or consciousness of a disciple.[47]

Chinese folk religion is a syncretic faith, originating in ancient tribal shamanism, that incorporates elements of Taoism, Buddhism, Confucianism, ancestor veneration and nature worship. It is historically the main source of Chinese mythology and has co-existed, both alongside and as part of, Taoism, Buddhism and Confucianism.

The terms Tao and Te are religious and philosophical terms shared between Taoism and Confucianism.[48] The authorship of the Tao Te Ching is assigned to Laozi, who is traditionally held to have been a teacher of Confucius.[49] However, some scholars believe the Tao Te Ching arose as a reaction to Confucianism.[50] Zhuangzi, reacting to the Confucian-Mohist ethical disputes in his "history of thought", casts Laozi as a prior step to the Mohists by name and the Confucians by implication. However, secular scholars usually consider Laozi and Zhuangzi to have been essentially mythological figures.[51][52]

Early Taoist texts reject the basic assumptions of Confucianism which relied on rituals and order, in favour of the examples of "wild" nature and individualism. Historical Taoists challenged conventional morality, while Confucians considered society debased and in need of strong ethical guidance.[53] 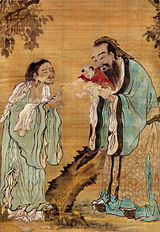 A painting of Confucius presenting a young Buddha to Laozi

The entry of Buddhism into China from India was marked by interaction and syncretism with Taoism in particular.[54] Originally seen as a kind of "foreign Taoism", Buddhism's scriptures were translated into Chinese using the Taoist vocabulary.[55] Chan Buddhism was particularly modified by Taoism, integrating distrust of scripture, text and even language, as well as the Taoist views of embracing "this life", dedicated practice and the "every-moment".[56] In the Tang period Taoism incorporated such Buddhist elements as monasteries, vegetarianism, prohibition of alcohol, the doctrine of emptiness, and collecting scripture into tripartite organisation. During the same time, Chan Buddhism grew to become the largest sect in Chinese Buddhism.[57]

The Buddha's "Dharma" seemed alien and amoral to conservative and Confucian sensibilities.[58] Confucianism promoted social stability, order, strong families, and practical living, and Chinese officials questioned how a monk's monasticism and personal attainment of nirvana benefited the empire.[55] However, Buddhism and Confucianism eventually reconciled after centuries of conflict and assimilation.[59]

Ideological and political rivals for centuries, Taoism, Confucianism, and Buddhism deeply influenced one another.[60] They did share some similar values. All three embraced a humanist philosophy emphasizing moral behavior and human perfection. In time, most Chinese people identified to some extent with all three traditions simultaneously.[61] This became institutionalised when aspects of the three schools were synthesised in the Neo-Confucian school.[59]