The Eastern Cape (Xhosa: iMpuma-Koloni, Afrikaans: Oos-Kaap) is one of the provinces of South Africa. Its capital is Bhisho, but its two largest cities are East London and Port Elizabeth.

The second largest province in the country (at 168,966 km2) after Northern Cape, it was formed in 1994 out of the Xhosa homelands or bantustans of Transkei and Ciskei, together with the eastern portion of the Cape Province. The central and eastern part of the province is the traditional home of the indigenous Xhosa people. In 1820 this area began to be settled by Europeans who originally came from England and some from Scotland and Ireland.

The Eastern Cape as a South African Province came into existence in 1994 and incorporated areas from the former Xhosa homelands of the Transkei and Ciskei, together with what was previously part of the Cape Province. This resulted in several anomalies including the fact that the Province has four supreme courts (in Makhanda, Port Elizabeth, Bhisho and Mthatha) and enclaves of KwaZulu-Natal in the province. The latter anomaly has fallen away with amendments to municipal and provincial boundaries.

The Xhosa Kingdom was one of the most powerful kingdoms in Africa and had all states in the Eastern Cape as tributaries. Any group, people or tribe that recognized the Xhosa Kingdom as Paramouncy became Xhosa, practiced Xhosa culture and used isiXhosa as their main language. Some of the tribes that fall under the category of Xhosa people include: AmaMpondo, AbaThembu, AmaMpondomise, AmaHlubi, AmaBhaca, AmaXesibe, AmaBomvana and more.[original research?]

In the late 18th century the Dutch Cape Colony slowly expanded eastwards from its original centre around Cape Town. This led to the establishment in 1786 of the Dutch settlement of Graaff-Reinet – named for the Governor of the Cape Colony Cornelius Jacob van de Graaff (in office: 1785–1791) and for his wife Hester Cornelia van de Graaff (née Reynet). Later, during the Napoleonic wars of 1803–1815, Britain took control of the Cape Colony (1806) and encouraged British citizens to migrate there as a means to boost the British population[citation needed] in the area.

From the early 1800s until the formation of the Union of South Africa in 1910, the Eastern Cape saw colonisation by British migrants. English settlers established most of the towns, naming them either for places in England or for the original founders. British colonisation saw schools, churches, hospitals, town centres and government buildings built to speed up development.[citation needed] Some of the older European settlements include: Grahamstown (1812), Port Elizabeth (1820), Salem (1820), Bathurst (1820), East London (1836), Paterson (1879), Cradock (1814) and King William's Town.

Main article: List of people from the Eastern Cape

The first premier was Raymond Mhlaba and the current premier is Oscar Mabuyane, both of the African National Congress. The province is served by the capital of Bhisho next to Qonce. The parliament and other important government buildings are situated in the precinct. The High Court that is superior to all courts in the region is situated in Makhanda and has local seats in Port Elizabeth, East London and Bhisho.

See also: List of cities and towns in the Eastern Cape

The Eastern Cape gets progressively wetter from west to east. The west is mostly semiarid Karoo, except in the far south, which is temperate rainforest in the Tsitsikamma region. The coast is generally rugged with interspersed beaches. Most of the province is hilly to very mountainous between Graaff-Reinet and Rhodes including the Sneeuberge (English: Snow Mountains), Stormberge, Winterberge and Drakensberg (English: Dragon Mountains). The highest point in the province is Ben Macdhui at 3001 m. The east from East London and Komani towards the KwaZulu-Natal border – a region known previously as Transkei – is lush grassland on rolling hills, punctuated by deep gorges with intermittent forest.

Eastern Cape has a coast on its east which lines southward, creating shores leading to the south Indian Ocean. In the northeast, it borders the following districts of Lesotho:

Climate is highly varied. The west is dry with sparse rain during winter or summer, with frosty winters and hot summers. The area Tsitsikamma to Makhanda receives more precipitation, which is also relatively evenly distributed and temperatures are mild. Further east, rainfall becomes more plentiful and humidity increases, becoming more subtropical along the coast with summer rainfall. The interior can become very cold in winter, with heavy snowfalls occasionally occurring in the mountainous regions between Molteno and Rhodes. 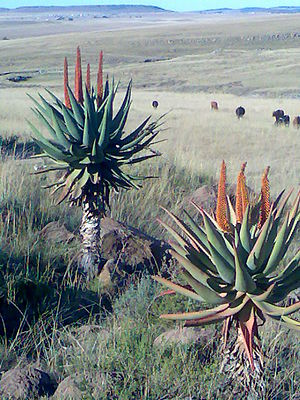 Aloe ferox on the R61 route between Cofimvaba and Ngcobo.

The landscape is extremely diverse. The western interior is largely arid Karoo, while the east is well-watered and green. The Eastern Cape offers a wide array of attractions, including 800 kilometres (500 mi) of untouched and pristine coastline along with some particularly splendid beaches, and "big-five" viewing in a malaria-free environment.

The province is the location of Tiffindell, South Africa's only snow skiing resort, which is situated near the hamlet of Rhodes in the Southern Drakensberg. It is on the slopes of Ben Macdhui, the highest mountain peak in the Eastern Cape (3001 m).

The National Arts Festival, held annually in Makhanda, is Africa's largest cultural event, offering a choice of the very best of both indigenous and imported talent. Every year for 11 days the town's population almost doubles, as over 50,000 people flock to the region for a feast of arts, crafts, music and sheer entertainment.

Jeffreys Bay is an area with some of the country's wildest coastline, which is backed by some of Africa's most spectacular sub-tropical rainforest. The waters here are noted for having "supertubes", good waves for surfing.

Aliwal North, lying on an agricultural plateau on the southern bank of the Orange River, is a popular inland resort known for its hot springs.[citation needed]

The rugged and unspoilt Wild Coast is a place of spectacular scenery. The coastal areas have been a graveyard for many vessels.

Whittlesea, Eastern Cape, situated in the Amatola Mountains, is known for the first wine estate in the province.[citation needed]

Qonce, Alice, Komani, Makhanda, Cradock and Fort Beaufort offer some of the best colonial architecture of the 19th century in the province. One is spoilt to choose between two major cities lining the coast, East London and Port Elizabeth.

The Eastern Cape is the poorest province in South Africa and has the highest expanded and official unemployment rate in the country.[5][6][7] Subsistence agriculture predominates in the former homelands, resulting in widespread poverty. A multi billion Rand industrial development zone and deep water port are being developed in Coega to boost investment in export-oriented industries.[8] Overall the province only contributes 8% to the national GDP despite making 13.5% of the population. The real GDP of Eastern Cape stands at an estimated R230.3billion in 2017, making the province the fourth largest regional economy in SA ahead of Limpopo and Mpumalanga.[9]

There is much fertile land in the Eastern Cape, and agriculture remains important. The fertile Langkloof Valley in the southwest has large deciduous fruit orchards. In the Karoo there is widespread sheep farming.

The Alexandria-Makhanda area produces pineapples, chicory and dairy products, while coffee and tea are cultivated at Magwa. People in the former Transkei region are dependent on cattle, maize and sorghum-farming. An olive nursery has been developed in collaboration with the University of Fort Hare to form a nucleus of olive production in the Eastern Cape.

Domestic stock farming is slowly giving way to game farming on large scale. Eco-tourism is resulting in economic benefits, and there is lower risk needed to protect wild, native game against drought, and the natural elements. Habitat loss and poaching pose the greatest problems.

The area around Stutterheim is being cultivated extensively with timber plantations.

The basis of the province's fishing industry is squid, some recreational and commercial fishing for line fish, the collection of marine resources, and access to line-catches of hake.

With three import/export harbours and three airports offering direct flights to the main centres, and an excellent road and rail infrastructure,[citation needed] the province has been earmarked as a key area for growth and economic development in modern South Africa.[citation needed]

The two major industrial centres, Port Elizabeth and East London have well-developed economies based on the automotive industry. General Motors and Volkswagen both have major assembly lines in the Port Elizabeth area, while East London is dominated by the large DaimlerChrysler plant, now known as Mercedes-Benz South Africa.[10]

Environmental-friendly projects include the Fish River Spatial Development Initiative, the Wild Coast SDI, and two industrial development zones, the East London Industrial Development Zone and the Coega IDZ near Port Elizabeth. Coega is the largest infrastructure development in post-apartheid South Africa. The construction of the deepwater Port of Ngqura was completed and the first commercial ship anchored in October 2009.[11]

Most of the best schools in the province are situated in the suburbs and are known as former "model c" institutions. A large number of black children rather choose to be schooled in them than to attend local schools in their communities due to the standard of teaching and pass levels. The Eastern Cape Department of Education has been roundly criticised for poor primary and secondary education[12] resulting from dysfunction,[13] special interests, and issues with the South Africa teachers union, SADTU.[14][15] The province struggles with a lack of schools; a lack of teachers leading to overcrowding; a lack of textbooks; a lack of basic facilities like toilets, electricity or water; and poor transport infrastructure which regularly absents and endangers learners. This is a huge problem faced in the former Transkei.[16]

In the 2015/2016 financial year, the province failed to spend R530 million of its allocated R1.5 billion budget for education, most of it intended for infrastructure development.[22][23]

The province is served by big medical centres such as Cecilia Makiwane Hospital that has undergone a major revamp recently.[when?] Filled with state of the art machinery and more beds. There are many private clinics in most cities and also famous hospitals like Frere in East London and Dora Nginza in Port Elizabeth. Tuberculosis and HIV are the province's leading causes of avoidable deaths, accounting for 9.8% and 5.4% of those deaths. Also known for its traditional black initiation schools, which perform coming-of-age ceremonies involving circumcision. These have helped to decrease the rate of people contracting HIV and other sexually transmitted infections.[25][26]