The Eastern Orthodox Liturgical Calendar describes and dictates the rhythm of the life of the Eastern Orthodox Church. Associated with each date are passages of Holy Scripture, Saints and events for commemoration, and many times special rules for fasting or feasting that correspond to the day of the week or time of year in relationship to the major feast days.

There are two types of feasts in the Orthodox Church calendar: fixed and movable. Fixed feasts occur on the same calendar day every year, while movable feasts change each year. The moveable feasts are generally relative to Pascha (Easter), and so the cycle of moveable feasts is referred to as the Paschal cycle. 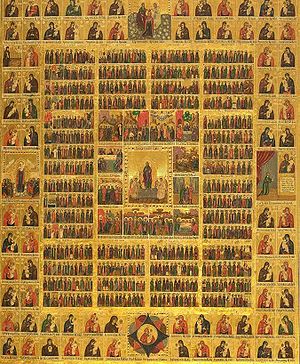 The following list of dates links only to fixed feasts of the Orthodox Church. These are the fixed dates; the particular day on which that date is observed differs depending upon whether one follows the Julian Calendar (sometimes referred to as the "Old Calendar") or the Revised Julian Calendar ("New Calendar"). All dates having to do with Pascha (Easter) - the beginning of Great Lent, Ascension, Pentecost, etc. - are "moveable" feasts, and thus are not on this calendar (see Paschal cycle).

These important notes should be remembered in using the following calendar:

Pascha is, by far, the most important day in the ecclesiastical year, and all other days, in one way or another, are dependent upon it. Pascha falls on different calendar dates from year to year, calculated according to a strict set of rules (see Computus for details). While the Fixed Cycle begins on September 1, the new Paschal Cycle begins on "Zaccheus Sunday" (the beginning of the preparatory season before Great Lent), eleven Sundays before Pascha, and continues until the Zaccheus Sunday of the following year. The Epistle and Gospel readings at the Divine Liturgy throughout the year are determined by the date of Pascha.

There are Twelve Great Feasts throughout the church year—not counting Pascha, which is above and beyond all other feast days. These are feasts which celebrate major historical events in the lives of Jesus Christ or the Theotokos (Virgin Mary). Of these, three are on the Paschal Cycle:

The other Great Feasts are on the Fixed Cycle:

In addition, the feast day of the patron saint of a parish church or monastery is counted as a Great Feast, and is celebrated with great solemnity.

In addition to Great Lent, there are three other lesser lenten seasons in the church year:

The season from the Sunday of the Publican and Pharisee (three weeks before the Great Lent) through Holy Saturday is called Triodion, while the season from Pascha through Pentecost is called the Pentecostarion.

Because of the complexity created by the intersection of the various cycles, a number of Orthodox institutions will print an annual calendar (Russian: Spisok) which contains rubrics for the services during that particular year. Simpler wall calendars will show the major commemoration of the day together with the appointed scripture readings.