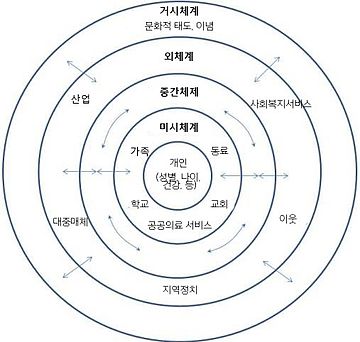 The person's own biology may be considered part of the microsystem; thus the theory has recently sometimes been called "Bio-Ecological Systems Theory."

Per this theoretical construction, each system contains roles, norms and rules which may shape psychological development. For example, an inner-city family faces many challenges which an affluent family in a gated community does not, and vice versa. The inner-city family is more likely to experience environmental hardships, like crime and squalor. On the other hand, the sheltered family is more likely to lack the nurturing support of extended family.[3]

Since its publication in 1979, Bronfenbrenner's major statement of this theory, The Ecology of Human Development [4] has had widespread influence on the way psychologists and others approach the study of human beings and their environments.[5] As a result of his groundbreaking work in "human ecology", these environments — from the family to economic and political structures — have come to be viewed as part of the life course from childhood through adulthood.

Bronfenbrenner's work provides one of the foundational elements of the ecological counseling perspective, as espoused by Robert K. Conyne, Ellen Cook, and the University of Cincinnati Counseling Program.

There are many different theories related to human development. The ecological theory emphasizes environmental factors as playing the major role to development.[2]