For the opposite, see: surplus (also called excess supply) 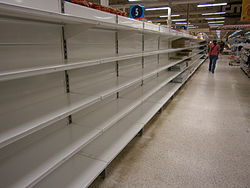 A 2014 image of product shortages in Venezuela.

In economics, a shortage or excess demand is when the demand for a product or service exceeds its supply in a market. It is the opposite of an excess supply (surplus).

In a perfect market (one that matches a simple microeconomic model), an excess of demand will prompt sellers to increase prices until demand at that price matches the available supply - market equilibrium[1][citation needed]. In economic terminology, a shortage occurs when for some reason (such as government intervention, or decisions by buyers not to raise prices) the price does not rise to reach equilibrium. In this circumstance, there are more buyers at the market price than the quantity of the good or service that is available, and some non-price mechanism (such as "first come, first served" or a lottery) determines which buyers are served.

In common use, the term "shortage" may refer to a situation where most people are unable to find a desired good at an affordable price, especially where supply problems have increased the price. "Market clearing" happens when all buyers and sellers willing to transact at the equilibrium price are able to find partners. There are almost always willing buyers at a lower-than-market-clearing price; the narrower technical definition doesn't consider failure to serve this demand as a "shortage", even if it would be described that way in a social or political context (which the simple model of supply and demand does not attempt to encompass).

Shortages (in the technical sense) may be caused by:

Decisions which result in a below-market-clearing price help some people and hurt others. In this case, shortages may be accepted because they theoretically enable a certain portion of the population to purchase a product that they couldn't afford at the market-clearing price. The cost is to those who are willing to pay for a product and either can't, or experience greater difficulty in doing so.

In the case of government intervention in the market, there is always a trade-off with positive and negative effects. For example, a price ceiling may cause a shortage, but it will also enable a certain percentage of the population to purchase a product that they couldn't afford at market costs. Economic shortages caused by higher transaction costs and opportunity costs (e.g., in the form of lost time) also mean that the distribution process is wasteful. Both of these factors contribute to a decrease in aggregate wealth.

Whether an economic shortage of a certain good or service is beneficial or detrimental to society often depends on one's ethical and political views. For instance, consider the shortage of recreational drugs discussed above, and the controversies around the use of such drugs. Likewise, consider the economic shortage of cars in the Soviet Union during the 1980s: On the one hand, people had to wait in line to buy a new car; on the other hand, cars were more affordable than they would have been at market prices.

In its narrowest definition, a labour shortage is an economic condition in which there are insufficient qualified candidates (employees) to fill the market-place demands for employment at any price. Such a condition is sometimes referred to by Economists as "an insufficiency in the labour force." An ageing population and a contracting workforce may curb U.S. economic expansion for several decades, for example.[7]

Wage levels have been suggested as one way to measure a labour shortage. However, this often does not match people's common perceptions. For example, if wages alone are the best measure of labour shortages, then that would imply that we should be importing doctors instead of farm workers because doctors are far more expensive than farm workers. However, there are institutionally-imposed limits on the number of doctors that are allowed to be licensed.[citation needed] If foreign migrant workers were not allowed into a nation, then farm wages may go up, but probably not enough to approach the wages of doctors.

The Atlantic slave trade (which originated in the early 17th century but ended by the early 19th century) was said to have originated due to perceived shortages of agricultural labour in the Americas (particularly in the American South). As this was the only means of malaria resistance available at the time.[8] Ironically malaria seems to itself have been introduced to the "New World" via the slave trade.[9]