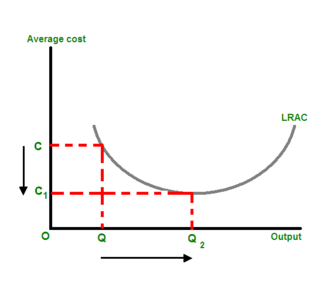 As quantity of production increases from Q to Q2, the average cost of each unit decreases from C to C1.

In microeconomics, economies of scale are the cost advantages that enterprises obtain due to size, output, or scale of operation, with cost per unit of output generally decreasing with increasing scale as fixed costs are spread out over more units of output.

Economies of scale apply to a variety of organizational and business situations and at various levels, such as a business or manufacturing unit, plant or an entire enterprise. For example, a large manufacturing facility would be expected to have a lower cost per unit of output than a smaller facility, all other factors being equal, while a company with many facilities should have a cost advantage over a competitor with fewer.

Some economies of scale, such as capital cost of manufacturing facilities and friction loss of transportation and industrial equipment, have a physical or engineering basis.

The economic concept dates back to Adam Smith and the idea of obtaining larger production returns through the use of division of labor.[1] Diseconomies of scale are the opposite.

Economies of scale often have limits, such as passing the optimum design point where costs per additional unit begin to increase. Common limits include exceeding the nearby raw material supply, such as wood in the lumber, pulp and paper industry. A common limit for low cost per unit weight commodities is saturating the regional market, thus having to ship product uneconomical distances. Other limits include using energy less efficiently or having a higher defect rate.

Large producers are usually efficient at long runs of a product grade (a commodity) and find it costly to switch grades frequently. They will therefore avoid specialty grades even though they have higher margins. Often smaller (usually older) manufacturing facilities remain viable by changing from commodity grade production to specialty products.[2][3]

The simple meaning of economies of scale is doing things more efficiently with increasing size or speed of operation.[4] Economies of scale often originate with fixed capital, which is lowered per unit of production as design capacity increases. In wholesale and retail distribution, increasing the speed of operations, such as order fulfillment, lowers the cost of both fixed and working capital. Other common sources of economies of scale are purchasing (bulk buying of materials through long-term contracts), managerial (increasing the specialization of managers), financial (obtaining lower-interest charges when borrowing from banks and having access to the a greater range of financial instruments), marketing (spreading the cost of advertising over a greater range of output in media markets), and technological (taking advantage of returns to scale in the production function). Each of these factors reduces the long run average costs (LRAC) of production by shifting the short-run average total cost (SRATC) curve down and to the right.

Economies of the scale is a practical concept that may explain real world phenomena such as patterns of international trade or the number of firms in a market. The exploitation of economies of scale helps explain why companies grow large in some industries. It is also a justification for free trade policies, since some economies of scale may require a larger market than is possible within a particular country—for example, it would not be efficient for Liechtenstein to have its own car maker, if they only sold to their local market. A lone car maker may be profitable, but even more so if they exported cars to global markets in addition to selling to the local market. Economies of scale also play a role in a "natural monopoly."

The management thinker and translator of the Toyota Production System for service, Professor John Seddon, argues that attempting to create economies by increasing scale is powered by myth in the service sector. Instead, he believes that economies will come from improving the flow of a service, from first receipt of a customer’s demand to the eventual satisfaction of that demand. In trying to manage and reduce unit costs, firms often raise total costs by creating failure demand. Seddon claims that arguments for economy of scale are a mix of a) the plausibly obvious and b) a little hard data, brought together to produce two broad assertions, for which there is little hard factual evidence.[5]

Some of the economies of scale recognized in engineering have a physical basis, such as the square-cube law, by which the surface of a vessel increases by the square of the dimensions while the volume increases by the cube. This law has a direct effect on the capital cost of such things as buildings, factories, pipelines, ships and airplanes.[6]

In structural engineering, the strength of beams increases with the cube of the thickness.

Drag loss of vehicles like aircraft or ships generally increases less than proportional with increasing cargo volume, although the physical details can be quite complicated. Therefore, making them larger usually results in less fuel consumption per ton of cargo at a given speed.

Heat losses from industrial processes vary per unit of volume for pipes, tanks and other vessels in a relationship somewhat similar to the square-cube law.[7]

Overall costs of capital projects are known to be subject to economies of scale. A crude estimate is that if the capital cost for a given sized piece of equipment is known, changing the size will change the capital cost by the 0.6 power of the capacity ratio (the point six power rule).[8][9]

In estimating capital cost, it typically requires an insignificant amount of labor, and possibly not much more in materials, to install a larger capacity electrical wire or pipe having significantly greater capacity.[10]

The cost of a unit of capacity of many types of equipment, such as electric motors, centrifugal pumps, diesel and gasoline engines, decreases as size increases. Also, the efficiency increases with size.[11]

Crew size and other operating costs for ships, trains and airplanes

Operating crew size for ships, airplanes, trains, etc., does not increase in direct proportion to capacity.[12] (Operating crew consists of pilots, co-pilots, navigators, etc. and does not include passenger service personnel.) Many aircraft models were significantly lengthened or "stretched" to increase payload.[13]

Many manufacturing facilities, especially those making bulk materials like chemicals, refined petroleum products, cement and paper, have labor requirements that are not greatly influenced by changes in plant capacity. This is because labor requirements of automated processes tend to be based on the complexity of the operation rather than production rate, and many manufacturing facilities have nearly the same basic number of processing steps and pieces of equipment, regardless of production capacity.

Economical use of byproducts

Karl Marx noted that large scale manufacturing allowed economical use of products that would otherwise be waste.[14] Marx cited the chemical industry as an example, which today along with petrochemicals, remains highly dependent on turning various residual reactant streams into salable products. In the pulp and paper industry it is economical to burn bark and fine wood particles to produce process steam and to recover the spent pulping chemicals for conversion back to a usable form.

Economies of scale and returns to scale

The literature assumed that due to the competitive nature of reverse auction, and in order to compensate for lower prices and lower margins, suppliers seek higher volumes to maintain or increase the total revenue. Buyers, in turn, benefit from the lower transaction costs and economies of scale that result from larger volumes. In part as a result, numerous studies have indicated that the procurement volume must be sufficiently high to provide sufficient profits to attract enough suppliers, and provide buyers with enough savings to cover their additional costs.[18]

However, surprisingly enough, Shalev and Asbjornsen found, in their research based on 139 reverse auctions conducted in the public sector by public sector buyers, that the higher auction volume, or economies of scale, did not lead to better success of the auction. They found that Auction volume did not correlate with competition, nor with the number of bidder, suggesting that auction volume does not promote additional competition. They noted, however, that their data included a wide range of products, and the degree of competition in each market varied significantly, and offer that further research on this issue should be conducted to determine whether these findings remain the same when purchasing the same product for both small and high volumes. Keeping competitive factors constant, increasing auction volume may further increase competition.[18]

In his 1844 Economic and Philosophic Manuscripts, Karl Marx observes that economies of scale have historically been associated with increasing concentration of private wealth, and have been used to justify such concentration. Marx points out that concentrated private ownership of large-scale economic enterprises is a historically contingent fact, and not essential to the nature of such enterprises. In the case of agriculture, for example, Marx calls attention to the sophistical nature of the arguments used to justify the system of concentrated ownership of land:

As for large landed property, its defenders have always sophistically identified the economic advantages offered by large-scale agriculture with large-scale landed property, as if it were not precisely as a result of the abolition of property that this advantage, for one thing, received its greatest possible extension, and, for another, only then would be of social benefit.[19]

Instead of concentrated private ownership of land, Marx recommends that economies of scale should instead be realized by associations:

Association, applied to land, shares the economic advantage of large-scale landed property, and first brings to realization the original tendency inherent in land-division, namely, equality. In the same way association re-establishes, now on a rational basis, no longer mediated by serfdom, overlordship and the silly mysticism of property, the intimate ties of man with the earth, for the earth ceases to be an object of huckstering, and through free labor and free enjoyment becomes once more a true personal property of man.[20]