As of August 2013, the state's seasonally adjusted unemployment rate was 7%.[2]

The state of Washington is one of only seven states that does not levy a personal income tax. The state also does not collect a corporate income tax or franchise tax. However, Washington businesses are responsible for various other state levies. One tax Washington charges on most businesses is the business and occupation tax (B & O), a gross receipts tax which charges varying rates for different types of businesses.

Washington's state base sales tax is 6.5% which is combined with a local rate. As of April 2010, the rate will be 9.5% in Seattle and other cities.[3] These taxes apply to services as well as products.[4] Most foods are exempt from sales tax; however, prepared foods, dietary supplements and soft drinks remain taxable. The combined state and local retail sales tax rates increase the taxes paid by consumers, depending on the variable local sales tax rates, generally between 8 and 9%.[5]

An (ex) applies to certain select products such as gasoline, cigarettes, and alcoholic beverages. Property tax was the first tax levied in the state of Washington and its collection accounts for about 30% of Washington's total state and local revenue. It continues to be the most important revenue source for public schools, fire protection, libraries, parks and recreation, and other special purpose districts.

Among its resident billionaires, Washington boasts Bill Gates, chairman of Microsoft, who, with a net worth of $40 billion, was ranked the wealthiest man in the world as of February 2009, according to Forbes magazine.[7] Other Washington state billionaires include Paul Allen (Microsoft), Steve Ballmer (Microsoft), Jeff Bezos (Amazon), Craig McCaw (McCaw Cellular Communications), James Jannard (Oakley), Howard Schultz (Starbucks), and Charles Simonyi (Microsoft).[8] 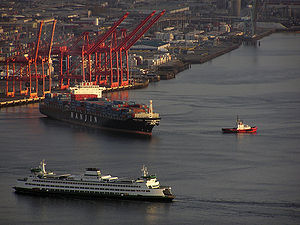 A container ship and the Bainbridge Island ferry near Terminal 46

Significant amounts of trade with Asia pass through the ports of the Puget Sound. Washington is the fourth largest exporting state in the United States, after New York, California, and Texas.

The ports of Washington handle 8% of all American exports and receive 6% of the nation's imports.[9]

A Fortune magazine survey of the top 20 Most Admired Companies in the US has four Washington-based companies in it, Starbucks, Microsoft, Costco and Nordstrom.[10]

Washington was one of eighteen states which had a government monopoly on sales of alcoholic beverages, although beer and wine with less than 20% alcohol by volume could be purchased in convenience stores and supermarkets. Liqueurs (even if under 20% alcohol by volume) and spirits could only be purchased in state-run or privately owned-state-contracted liquor stores.[11] This however was overturned by 2011's Initiative 1183 which ceased state-run liquor stores as of June 1, 2012.[12] 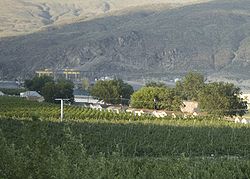 The apple industry is of particular importance to Washington. Because of the favorable climate of dry, warm summers and cold winters of central Washington, the state has led the U.S. in apple production since the 1920s.[14] Two areas account for the vast majority of the state's apple crop: the Wenatchee–Okanogan region (comprising Chelan, Okanogan, Douglas, and Grant counties), and the Yakima region (Yakima, Benton and Kittitas counties).[15]

Washington is the leading producer of hydroelectric power in the U.S. Hydroelectricity makes up over half of electricity state's electric generation and nearly 35% of its total energy consumption.[16]

Employment by industry in Washington [17]