From Infogalactic: the planetary knowledge core
Jump to: navigation, search
For more informal use of the term, see Ecstasy (emotion)

Ecstasy (or ekstasis; from the Ancient Greek ἔκστασις, "to be or stand outside oneself, a removal to elsewhere" from ek- "out," and stasis "a stand, or a standoff of forces") is a term used in Ancient Greek, Christian and Existential philosophy. The different traditions using the concept have radically different perspectives.

According to Plotinus, ecstasy is the culmination of human possibility. He contrasted emanation (πρόοδος, prohodos) from the One—on the one hand—with ecstasy or reversion (ἐπιστροφή, epistrophe) back to the One—on the other.

This is a form of ecstasy described as the vision of, or union with, some otherworldly entity (see religious ecstasy)—a form of ecstasy that pertains to an individual trancelike experience of the sacred or of God. 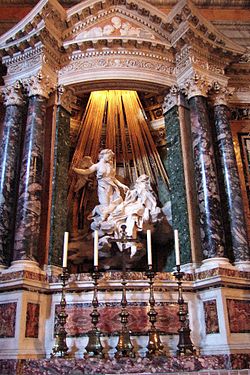 Among the Christian mystics, Bernard of Clairvaux, Meister Eckhart and Teresa of Ávila had mystical experiences of ecstasy, or talked about ecstatic visions of God.

The term is currently used in philosophy usually to mean "outside-itself". One's consciousness, for example, is not self-enclosed, as one can be conscious of an Other person, who falls well outside one's own self. In a sense consciousness is usually, "outside itself," in that its object (what it thinks about, or perceives) is not itself. This is in contrast to the term enstasis which means from "standing-within-oneself" which relates to contemplation from the perspective of a speculator.[1]

This understanding of enstasis gives way to the example of the use of the "ecstasy" as that one can be "outside of oneself" with time. In temporalizing, each of the following: the past (the 'having-been'), the future (the 'not-yet') and the present (the 'making-present') are the "outside of itself" of each other. The term ecstasy (German: Ekstase) has been used in this sense by Martin Heidegger who, in his Being and Time of 1927, argued that our being-in-the-world is usually focused toward some person, task, or the past (see also existence and Dasein). Telling someone to "remain in the present" could then be self-contradictory, if the present only emerged as the "outside itself" of future possibilities (our projection; Entwurf) and past facts (our thrownness; Geworfenheit).[2]

Emmanuel Levinas disagreed with Heidegger's position regarding ecstasy and existential temporality from the perspective of the experience of insomnia.[3] Levinas talked of the Other in terms of 'insomnia' and 'wakefulness'.[4] He emphasized the absolute otherness of the Other and established a social relationship between the Other and one's self.[5] Furthermore, he asserted that ecstasy, or exteriority toward the Other, forever remains beyond any attempt at full capture; this otherness is interminable or infinite.[6] This "infiniteness" of the Other would allow Levinas to derive other aspects of philosophy as secondary to this ethic. Levinas writes:

The others that obsess me in the other do not affect me as examples of the same genus united with my neighbor by resemblance or common nature, individuations of the human race, or chips off the old block... The others concern me from the first. Here fraternity precedes the commonness of a genus. My relationship with the Other as neighbor gives meaning to my relations with all the others.[7]

Other uses of the term

The term 'ecstasy' is also used concomitantly by philosophers to refer to a heightened state of pleasure or area of consciousness that may have been ignored by other theorists; to sexual experiences with another person, or as a general state of intense emotional rapture. These may include epiphany, intense consciousness toward another, or extraordinary physical connections to others.